A belated review for Big Finish’s other grand boxset of 2012, a sweeping adventure that brings together many disparate strands of BF’s developing mythology. Dominion acts as a sequel to the Klein trilogy of seventh Doctor main range plays; a follow-up to Raine’s adventures in the “Season 27” of Lost Stories; and a relaunch for UNIT. Quite a mash-up, but it works, introducing enough new elements to make this far more than a parade of continuity points. Like the eighth Doctor’s Dark Eyes boxset, Dominion is split over four discs, but is written as a single expansive storyline rather than four discrete adventures. It takes a similarly epic approach, providing not only a worldwide vista, but multiple parallel dimensions as the walls between worlds begin to crumble.

Also like Dark Eyes, this release shows BF trying a rather more visual approach to their storytelling. Again, a visually arresting audioplay may seem oxymoronic, but this aspect really works. In the lead-up to the story’s release, BF posted numerous illustrations by the multi-talented Alex Mallinson (who also voices several characters throughout the adventure). There are some genuinely intriguing images on offer throughout Dominion, supported not only by the accompanying artwork but also some superlative sound design by Martin Johnson. Gigantic flying baby heads with foghorn voices, cybernetic cuboid creatures, lava-spewing spiders,  mind-sucking leeches and the fabulously cockney-voiced Nexus organism – the interdimensional lifeforms are a testament to the imaginations of Jason Arnopp and Nick Briggs.

However, Dominion doesn’t get so carried away by its epic scope that it forgets about the characters. On the contrary, this is one of the most character-driven stories I’ve recently heard, with a large cast that is well-served both by writing and performance. There are a lot to cover, so I’ll start with the character I’m least familiar with: Raine Creevy. I haven’t listened to any of the seventh Doctor Lost Stories, not really being tempted by the storylines, so I haven’t heard anything of Beth Chalmers as the seventh Doctor’s newest companion. Here she’s presented as an occasional returnee to TARDIS travel, enjoying the chance of travelling without another companion in tow. Judging her just on Dominion, Raine strikes me as an excellent companion to this Doctor, willing to be astounded by the wonders of the universe but not afraid to question the Doctor when things aren’t quite right. She’s tremendously loyal to him though, hugely likable and brings a little flirtatious charm to the TARDIS.

The UNIT personnel vary in their success, but naturally, not every character in a large organisation is going to be afforded the same amount of attention. We see a great deal of UNIT’s operations against the interdimensional hordes from the POV of Sergeant Wilson (no, not that Sergeant Wilson, although just imagine the hilarity!) Bradley Gardener is endearingly overwhelmed as the story’s requisite audience identification character. An ordinary soldier fighting extraordinary foes, Wilson is a successful addition to the broadening cast of characters, although we could have done without being reminded that he has a baby on the way every ten minutes. 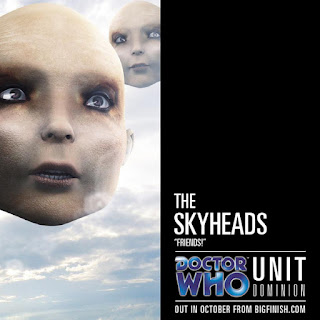 It’s UNIT’s new Scientific Advisor who is the true focus of the story. Tracey Childs is predictably fantastic as Dr. Elizabeth Klein, a character resurrected for the range last year after her debut back in Big Finish’s early days. She’s a character with a complex backstory – a Nazi scientist from an alternative reality in which Germany won WWII,  who was stranded in our timeline when the Doctor manipulated her into erasing her own, and who later travelled with him in a misguided attempt at her rehabilitation, which almost led to appalling consequences to history at her hands. Oh, but now she’s not a Nazi, because the Doctor arranged to have her history rewritten so she now fits into the proper timeline. It’s amazing that a character with so much baggage works as well as she does. Much of this is down to some elegant writing, which puts across Klein’s developing paranoia due to the “umbrella man” continually popping up to check on her, and drops her background into the storyline after we’ve got to know this version of her well. However, most of the character’s success is down to Childs, who gives a performance that at once suggests authority and vulnerability. Klein reaches the end of the adventure thoroughly rehabilitated, and is one of the most successful characters BF have created in years.

And so, onto the Doctors. Big Finish took a risk with this one, introducing a new incarnation of the Doctor, something that might have gone badly wrong if they failed to pull it off. However , they succeeded, albeit with a caveat. We know that the BBC granting BF permission to create a new version of the signature character is highly unlikely, so listening to Dominion it’s impossible to shake off the suspicion that this isn’t really the Doctor at all, but some imposter. The breaching of the dimensions raises the possibility that this is an alternative Doctor, which is a nice red herring, but in the end, the reveal that the “other Doctor” is, in fact, the Master leave me ambivalent. Creating a new Master is almost as momentous as creating a new Doctor, and the reveal is played beautifully; however, there’s still a sense of “oh, it’s just the Master,” which comes as something of an anti-climax (although it’s quite in keeping with the UNIT setting, harking back to the Pertwee years). However much the Master might impress, a genuine new Doctor would have been far more radical, and unexpected. 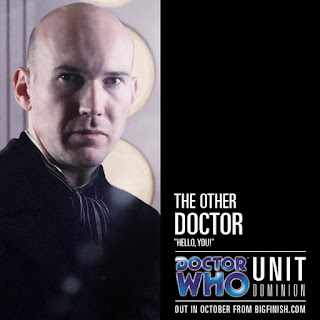 All of that said… Alex MacQueen is utterly spellbinding as the Doctor/Master. What an inspired bit of casting. When he first appears, introducing himself to Klein, then later the Doctor himself, he’s immediately absurd, unpredictable and hugely likable. Camp, arrogant, fun and over-the-top, MacQueen makes both a brilliant Doctor and, once the gloves are off, an unsettlingly unhinged Master. Some commentators have suggested that this is “John Simm’s Master done right,” and while I disagree (I love Simm as the Master), I can see their point. MacQueen is magnetic, convincing as a Doctor from so far ahead in the timeline that he can barely remember being in his seventh life. He lacks some of the morals we expect from the Doctor – an astute reflection on the seventh incarnation, who also crossed the line on more than one occasion. We can believe this individual is the Doctor, and this makes the Doctor’s acceptance of him easier to swallow (unlike the similar gag in The Next Doctor on TV). There are clues to his real identity peppered throughout; he displays formidable hypnotic abilities, and drops references only to earlier adventures with which the Master was involved. Also pleasingly, UNIT do not trust him straight away, not surprisingly considering that the Doctor just upped and left them when it suited him, making the Master’s plan a much longer and more arduous one than he was prepared for. That the Master makes such a convincing Doctor is interesting. He clearly enjoys the role; it explores the inescapable inference that, above all else, the Master just wants to be the Doctor, something that is driven home in the closing moments of the story when Klein actually comes out and says it. 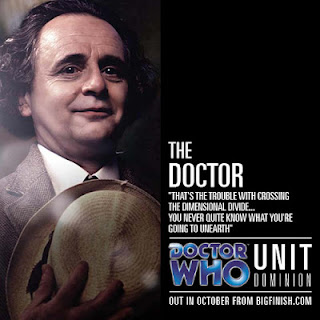 When it comes to the real Doctor, patience wins out. McCoy gets short shrift in the first half of the story, kept to the sidelines and barely appearing, engaged in adventures beyond the dimensional divide that, frankly, aren’t as interesting as the sweeping events occurring on Earth. his reaction to his supposed future incarnation is priceless, especially considering that MacQueen’s character is clearly modelled on the overly verbose, youthful and ridiculous tenth and eleventh Doctors. Once the Doctor gets to enter the main action in part three, McCoy steps up his game, and his impressive in the final instalment, when he gets to square up to the Master. Dominion takes an interesting turn when dealing with the seventh Doctor, making him face his own mistakes; not only his treatment of Klein, but his error of judgment that leads to the collapse of the dimensional walls and causes the chaos on display in this story. With only himself to blame, the Doctor seems lost; it’s only when he gets a genuine enemy to focus on that he pulls himself together. Even then, he comes perilously close to losing to the Master. It’s nail-biting stuff.

Dominion takes in far more than I’ve covered here, with vast military operations, new facets of Time Lord mythology with the introduction of the legendary Dimensioneers, and whole new alien civilisation, the Tolians, all taking part. There are some weaknesses – the pointless cameo from a Time Lady version of Ace – but on the whole Dominion juggles its myriad elements well. A real triumph for Big Finish.

Best line: “He thought that you’d revert to type so he kept popping back from time to time to make sure you weren’t invading Poland or committing genocide on the quiet…”

Placement: For UNIT, this is a few years after Terror of the Zygons.The Brigadier is nowhere to be seen, and has presumably retired, as related in Mawdryn Undead.

For the Doctor, this is after the “Klein trilogy,” so very near the end of his seventh life.

For the Master, placement is uncertain. He clearly has no regard for the Laws of Time, and has no problem crossing his own timestream. He’s using the late Chancellor Goth’s TARDIS, in which he travels to Tersurus to get his info on the Dimensioneers. This would seem to imply he’s from after The Deadly Assassin, although it’s just possible that he is from before those events, and has jumped forward in Gallifrey’s timestream. So perhaps this is in fact the incarnation of the Master that follows on from Roger Delagado’s, and is horribly injured before appearing in the aforementioned Assassin. However, he seems familiar with Ace, suggesting this is post-Ainley – unless this was simply an opportunistic bluff. On the other hand, he acts far more like the John Simm Master, so perhaps this is a version from much later in his existence… although he’s still using the Tissue Compression Eliminator, which we have never seen in the new series. So frankly, it really is anyone’s guess.
Posted by Daniel Tessier at 13:03