WHO BOOK-QUEST #1: The Time Travellers by Simon Guerrier

Just about squeezing into January, here’s my first retro book review for Doctor Who’s anniversary year. I’m planning to read one book per Doctor as we go along, on the now well-established Doctor-a-month system. Some will be BBC Books, some will be by Virgin. Might even get a Telos novella in there. Some will be old favourites, others will be new to me – the only condition being that I won’t cover a book that I’ve written about before. We start with a first Doctor story – Simon Guerrier’s The Time Travellers.

Published in late 2005, this was the penultimate novel in BBC Books’ Past Doctors Adventures line. With the new TV series a runaway success, and ninth Doctor books reaching a younger demographic and selling in huge numbers, the earlier ranges that the BBC had published had fallen into decline. The Eighth Doctor Adventures had already ended back in June, with Lance Parkin’s The Gallifrey Chronicles, and the PDAs wouldn’t last much longer. However, while almost everyone’s attention was focussed on the new series and the upcoming adventures of the tenth Doctor, the PDA range quietly got on with producing some remarkable books. 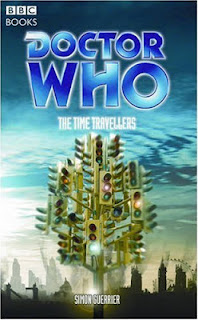 Despite being Guerrier’s first novel, The Time Travellers is an assured, well-written work that perfectly captures the spirit of the era it recreates. It’s easy to see why he became such a regular writer for Big Finish, particularly for the Companion Chronicles releases featuring the first Doctor. In my head this is all in monochrome – always a sign of a successful depiction of the Hartnell years. It’s a spot-on depiction of the relationships between the four principle characters at that specific point in the series – the brief gap between Planet of Giants and The Dalek Invasion of Earth. Ian and Barbara are clearly on the cusp of romance here – something that was never explicit in the series but was unquestionably present by the time of The Romans, only a few serials later. Their developing feelings for each other both raise tensions between them and hold them together during the course of the book. Susan is clearly outgrowing here role in the series, which she had done virtually as soon as the first episode ended. The Doctor is a kinder, more moral figure than the one who began the series, but is still very much a difficult man with his own sense of superiority. His relationship with both Ian and Barbara develops further during the course of the novel, their mutual respect increasing in line with what we saw on screen, while the Doctor comes to the inescapable conclusion that he will soon have to part ways with Susan.


However, The Time Travellers isn’t content to tread old ground. Guerrier takes an ingenious route with the novel, utilising the history of the series to tell a truly original story. The Doctor here is more proactive than in any story set before this, yet fitting perfectly with what will come after in The Dalek Invasion of Earth, and there’s a perfectly valid reason for it. Long story short, the TARDIS arrives in London in 2006 – just months after the novel was published – but it’s a 2006 that is wholly unlike the one we know. Britain is a martial state, losing a war with South Africa. Technological progress has stalled, and yet the military are experimenting with time travel – creating near-duplicates of individuals they have sent back through time. Timelines with subtle variations are overlapping, creating this effect, and it’s this potentially catastrophic tinkering with time that immediately puts both the Doctor and Susan on the alert. The reason is obvious – the Doctor is a Time Lord, and though they never come out and say the term, it’s implicit in his actions that he has both an innate regard for the sanctity of time and a duty to protect it.

It’s a clever use of the series’ complete history that feeds, but doesn’t overwrite, the period in which the story is set. Just as clever is the nature of the skewed timeline in which the Doctor and company find themselves. This is a 2006 in which history has taken another path. In the 60s, something referred to simply as the Machine took over the minds of millions of Britons, leaving devastation in its wake. Shunning technology, Britain entered a regressive decline, no match for a South Africa aided by technology acquired from machine-people living in Antarctica. It’s a world that is at once a plausible extension from 1964, and one inextricably linked to the adventures of the first Doctor – and only the first Doctor. The clear implication is that this is the true timeline of the Earth; one in which the Cybermen and WOTAN were unencumbered by the Doctor’s interference. By keeping such elements confined to the first Doctor’s tenure, Guerrier prevents the speculation getting out of hand, although there’s a cheeky nod to Remembrance of the Daleks (the British time machine is developed using Dalek technology). Yes, this is a seventh Doctor story, but the presence of the Daleks in that period was explicitly down to the presence of the first Doctor prior to An Unearthly Child. It also gives the Doctor reason to truly begin to fear the Daleks… no wonder he is so opposed to them upon their meeting in the following story.

This could all be taken as fanwank, of course, but it never comes across as contrived or unnecessary. Instead, there is a simply, unavoidable implication: the Doctor alters the history of the world each time he becomes involved. This leads to a wonderful confrontation between him and Barbara, a scene which both threatens and then reinforces the growing trust between them. Barbara realises that the Doctor lied to her in The Aztecs, with his infamous “You can’t change history – not one line!” speech. Instead, a link is forged between the “time can be rewritten” approach the new series came to embrace and the earlier presentation of an inviolate history. The Doctor admits that the TARDIS exists purely to allow observation – hence its chameleonic abilities – and that by simply stepping out from the Ship, he and all who travel with him are changing history. He keeps doing so because he is not content to observe. “I couldn’t do that, could you?” he asks her. “It’s not travel, it wouldn’t be real.” It at once makes us reevaluate all the Doctor’s travels, and reinforces the tenets of his travels in the first place. It strikes at the very heart of what  Doctor Who is.
Posted by Daniel Tessier at 00:28