A short time ago I reviewed Big Finish Productions' seventh Doctor special release, UNIT: Dominion. What you may not know is that I was also lucky enough to win a selection of signed script fronts from the chaps at BF. They arrived today! 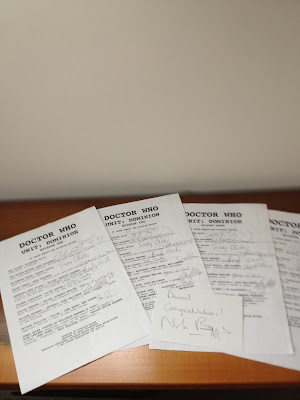 Signed by Sylvester McCoy, Alex MacQueen, Tracey Childs, Beth Chalmers and more, plus a little card signed by Nick Briggs (Time Lord 1). A lovely little extra to add to my enjoyment of this audio saga.

My past has come back to haunt me this month. Ten years ago(!) I wrote for a Doctor Who fanfic series called The Ninth Doctor Adventures or NDAs (we only had eight Doctors back then). The chap in charge, James Allenby, has resurrected and revamped the series as Doctor Who: Darkpaths. He's even unearthed my story, 'Putty Love.' It's very, very strange seeing this again. I really, really hope I've got better at writing in the intervening years. Still, it does feature a Doctor based on Richard O'Brien.

I've been watching a lot of Sherlock these last couple of months. I'll be writing an article on the series for Television Heaven, once the site has undergone its revamp. So I've been watching all the episodes, making notes, and watching again with commentary. Plus, interspersing them with the occasional Rathbone movie, just for fun.

Also, Being Human. Series five has kicked off, and the first episode, although it was a little swamped with the setting up three new adversaries, was rather excellent. I'm very much looking forward to seeing how this series progresses. Only six episodes this time, I understand, rather than the usual eight, but that just means I'll get working on my article for Television Heaven too. (Yes, I've a few things planned. Expect some more Doctor Who and Quatermass as well, in time).

Also, it's Pat Troughton month! I've been listening to The Power of the Daleks and The Shadow of Death, and reading The Menagerie. Which serial shall I watch? Torn between The Mind Robber and The Invasion. Maybe I'll find time for both. Expect the next 'Doctor by Doctor' essay in short order, plus more reviews before the month's out.

And... Red Dwarf! The twenty-fifth anniversary is imminent!

Email ThisBlogThis!Share to TwitterShare to FacebookShare to Pinterest
Labels: Being Human, Doctor Who, fiction, Sherlock Holmes