The guys behind these new Ghostbusters comics have some twisted imaginations. A man vomiting green, glowing bats; rampaging ectoplasmic chimps; the ghost of a conjoined twin, complete with its own little foetus-babies, bobbing around in its translucent belly… there’s no shortage of wild, gross-out imagery in these latest trade collections from IDW. Volume 2, ‘The Most Magical Place of Earth,’ collects issues 5-8, with volume 3, ‘Haunted America,’ collecting volumes 9-12. All are written by Erik Burnham, with artwork by ‘Dapper’ Dan Schoening and colours by Luis Antonio Delgado, with further materials from Tristan ‘T-Rex’ Jones.

To recap, Peck is now in charge of the Paranormal Contracts Oversights Commission (PCOC), now with a legitimate, enforceable right to make the Ghostbusters’ lives a misery. He’s demanding all four members of the team be in tip-top physical condition before allowing any further paranormal investigation. Which is a problem, when an amusement park -  that ‘Most Magical Place on Earth’ - becomes the site of a major supernatural incursion, and a voracious Manitou possesses the body of a young boy in its quest to feed. It sups on the juices generated by greed and selfishness, so we’d better hope Venkman goes nowhere near it. 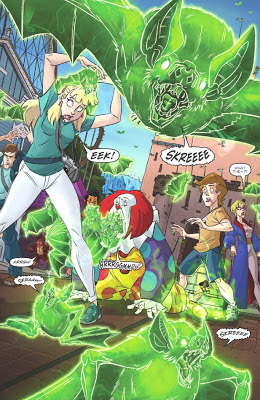 It’s not only Pete who has problems, however. Spengs has a few demons of his own to deal with, when he spots a long-dead classmate across the street. This is followed up in the final segment of Vol. 2, ‘The Man Who Cheated Death,’ in which we discover the real reason there are so many ghosts creeping out of the cracks in New York these days. This is supported by Jones’s PCOC pages that appear at the end of the volume, not only giving us the lowdown on some of the Busters latest ectoplasmic enemies, but also providing us with the back-up story ‘The Man Who Sought Death.’ It’s a great addition to the series’ burgeoning mythology, and even links events to a familiar Carpathian warlord of the Busters’ acquaintance.

It’s tough to defend a supernatural uprising in the big city with all Peck’s regulations in place, though. Still, New York is not the only state, and there’s a whole ‘Haunted America’ out there. Volume 2 is great, but Vol. 3 steps it up a notch, taking us on a ghostbusting road trip. We take in Detroit, haunted by a phalanx of phantom soldiers from throughout American history, followed by a Thrilling trip to New Orleans, where zombies are rising from their graves and dancing to the whims of a long-dead voodoo priestess. Roswell, New Mexico, is having a double-dose of supernatural trouble, as the ghosts of crashed aliens start to manifest. It’s such an obvious, yes irresistible idea, but the team find a way to give it a twist (and seeing Egon in a slanging match against  thinly-veiled Fox Mulder is a hoot). The final step on the journey sees the Busters reach Seattle, where a rock god rolls out of his grave and starts causing some serious fire hazards. And all the while, a rival team of ghostbusters are stepping up their efforts to be the new protectors of New York…

Vol. 3 closes, not with a PCOC entry, but a special tale from Jones, the Twin Peaks and Duel­ flavoured ‘Who Killed Laura Parr?’ It’s an atmospheric, beautifully-told gem of a tale, and shows Peter in a more heroic light than we’ve seen in a while. It’s all the more effective for being so stand-alone.

As ever, it’s the combined talents of the four artists involved that makes these strips such a success. Burnham continues to strike just the right balance between humour, chills, ongoing stories and gripping set pieces. Schoening’s art goes from strength to strength, perfectly complimenting the tone of the script by providing a unique mix of the cartoonish and the creepy. Delgado’s colours add tremendous depth to the artwork, giving a movie-rich visual effects finish, while Jones supports the main strip with his prodigious writing and drawing talents. 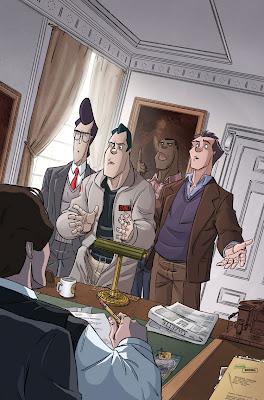 Then, of course, there’s the profusion of in-jokes and references throughout. Almost every panel contains something for the devoted fan to spot, to the stage that I think I’m spotting things that aren’t actually there, and are just the products of my confused imagination. It’s the animated series that get referenced most often – Janine even gets a new boyfriend who’s the  spit of the Extreme Ghostbusters version of Egon. The icing on the cake, however, is the inclusion of Kylie Griffin, the XGB resident goth chick, here reimagined as assistant and researcher at Ray’s Occult Books. It’s a great touch. Add in all the other nods and winks to both RGB and XGB, and it’s easy to imagine that the events of the animated series are going on in New York, parallel to the lives of the real Ghostbusters. Well, not the Real Ghostbusters. You know what I mean.

IDW’s Ghostbusters series continues to triumph in these two volumes and I eagerly await the fourth. It’s got a cracking ongoing storyline, fascinating insights into the Busters’ personalities, some of the most imaginative monsters in modern comics, cheeky nods and winks, a new Ecto-van with a portable containment unit and oodles of pink slime – what more could a Ghostbusters fan want?