WHO BOOK-QUEST #2: The Menagerie by Martin Day

So, for our second Doctor choice, we’re stepping back ten years to 1995, for an entry in Virgin’s Missing Adventures series. I’ll be chopping and changing ranges a bit for this series of reviews. I can’t say I really knew anything about The Menagerie, Martin Day’s first Doctor Who novel. It’s a bit of a forgotten entry from the latter days of Virgin’s remit. So I can’t really say I was expected anything in particular from this novel, so I guess in that sense I wasn’t disappointed – but I can see why it’s been forgotten. 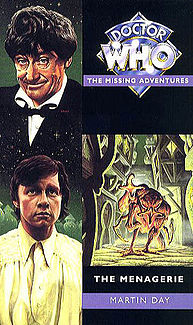 The Menagerie is set right at the end of the second Doctor’s TV era, just before the grand finale of The War Games, not that this makes any particular difference to the story. Day is not an author who strives to recreate the era he’s invoking. This is a Virgin novel through and through, more like the New Adventures than the TV series in style and content. There’s plenty of violence and sex, the latter being something that you certainly wouldn’t expect to find in a Troughton serial. That’s not to say I’m against such an approach. A faithful pastiche is only one approach to a missing adventure, and putting familiar characters in entirely unfamiliar situations and story styles can be just as rewarding, indeed more so. For the most part, Day manages to capture the three regular characters well, and although the Doctor and Zoe can lapse into dreary technobabble exposition occasionally, Jamie is note perfect. Plus, after saving dozens of young ladies on TV, he finally gets his just rewards and gets his end away, so good for him.

It’s just a shame that in general the novel is such a mediocre effort. It rattles along briskly enough, but the prose is uninspiring, with some truly dreadful lapses into portentous dialogue and banal simile. There are some interesting ideas, but none of them are well explored; the world the TARDIS crew visits is based on religion and a belief in magic, with science outlawed as heretical, but there’s little conception of how a society like this might actually work. Day creates a variety of alien species to populate the novel – four races that make up the Menagerie of the title – and while any one of them might have made for an interesting point of focus, none of the four is given any development beyond a few surface details. Instead, a great deal of time is spent politicking between rather uninteresting characters with bizarre names, saying things like “The Way of Kuabris will not be destroyed!” and “They will feel the true might of the Brotherhood of Rexulon!” and other cod-fantasy nonsense.

The only part that really stood out for me were Zoe’s adventures, during which she is put through the hellish experience of imprisonment, followed by being sold into slavery and eventually ending up as part of a travelling freakshow. There’s a great deal of colour to these sequences, although it’s fairly unbelievable that Zoe gets over her horrible experiences just as soon as she’s met a few decent folks and has problems to solve, turning quickly into the walking computer she was in her weaker moments on television.

Sometimes you pick up a book you’re unfamiliar with, and it’s an unexpected delight, other times, you wished you’d never found it. The Menagerie is, thankfully, not as bad as all that, but it’s a very disjointed, underwhelming affair.
Posted by Daniel Tessier at 22:03

Email ThisBlogThis!Share to TwitterShare to FacebookShare to Pinterest
Labels: book reviews, Doctor Who, Who Book-Quest