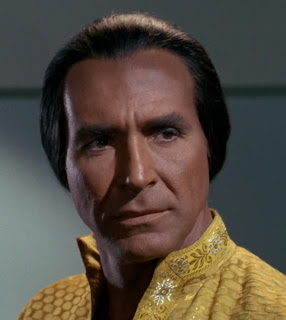 "A man who lived through the nineteen-nineties.."

Planets visited: We don’t see it, but Khan and his followers are relocated to Ceti Alpha V (this should more properly be Alpha Ceti V). Things will not go well for them there.

Future History: The Eugenics Wars, also called the Third World War, were fought during the 1990s. A progressive programme of eugenics intended to improve the human race led to a number of superhuman warlords fighting over the right to rule the Earth. Between ‘92 and ‘96, the world was divided up between various warlords, the most powerful being Khan, who conquered a quarter of the globe by 1993. After the supermen were overthrown, Khan and a number of his followers fled the Earth in a sleeper ship, the Botany Bay.

At the time of broadcast, the 1990s were comfortably far off and no one expected thousands of fans to still be discussing these things in the 21st century. Subsequent series of Star Trek have fudged the issue, being deliberately vague about the timing of the Eugenics Wars and hinting that they were fought considerably later than this. TNG places the Third World War in the mid-to-late 21st century, but also seems to suggest that it’s a completely different conflict. Enterprise introduces the term Augments for the supermen. Note that in this episode Khan and his kind are stated to be the product of selective breeding; there’s no hint of genetic engineering. This aspect only appears on Khan’s return in Star Trek II.

Kirk states that Khan has been sleeping for two centuries, once again suggesting that the series is set during the 22nd century, rather than the 23rd. 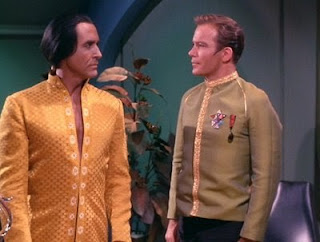 Captain James T: He’s a bit too trusting of the mysterious 20th century man he revives, allowing him access to much information on the ship and its functions. In fairness, he doesn’t realise how intelligent Khan is at the time. He isn’t scared to fight a superhumanly strong individual, and manages to club him to unconsciousness. He’s generous in victory, allowing Khan and his followers - and McGiver - to start anew on Ceti Alpha V. He knows his Milton.

Green-Blooded Hobgoblin: Is very cool at dinner with Khan - the two intellects challenge each other verbally, icily polite but hostile. Spock admits to being pleased to see Kirk when he discovers he has survived his encounter with Khan and the pressure chamber.

The Real McCoy: Pretty awesome in this, staying cool when Khan puts a knife to his throat and informing on the neatest way to slit his artery. McCoy is hard as nails.

Khaaaaaaaaaaaaaan! Khan Noonien Singh, once ruler of a quarter of the globe, is one of Trek’s most infamous and successful characters. Ricardo Montalban is perfect in the role, imbuing Khan with a powerful charisma. Unlike the usual, Nazi-influenced take on eugenics, Khan is no Aryan, but of northern Indian descent (the name Singh suggests a Sikh background). However, Montalban is a white Mexican, so the use of an Asian superman character isn’t followed through all that far. It’s more a case of generic foreigner characterization – anyone swarthy looking will do.

Khan is assuredly convinced of his own superiority, powerful both physically and intellectually, but quick to anger and limited by his own arrogance. He relishes the opportunity to tame a world (his attitude will change during his experiences there), and clearly respects Kirk as an opponent.

Khan is one of only two villains to face Kirk twice in live-action Trek, the other being Harry Mudd. 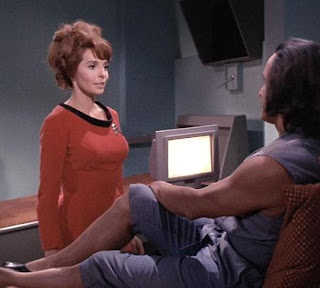 Sexy Trek: Marla McGivers, the ship’s historian, has a thing for twentieth century dictators. She immediately gets the horn when she see Khan in his stasis chamber, and fancies him even more when she works out who he is. She and Khan have a pretty brutal sort of romance - McGivers is clearly the kind of girl who gets off on being smacked about. For all his violence and domination, Khan does seem to have some genuine affection for McGivers, describing her as “superior,” but he still treats her like dirt most of the time. This episode’s gender politics are troublesome; the clear inference is that, as a female, McGivers is incapable of keeping her professionalism and is easily swayed by a more dominant male personality. At the dinner table, Uhura plays her audience of Khan as clearly attracted to him.

While Khan and the other supermen change into jumpsuits, the female superpeople remain in their revealing gauze nighties for their aerobics session.

Future Treknology: The SS Botany Bay is a DY-100 class spaceship, restricted to sublight velocities, equipped with stasis chambers to keep its crew alive over the course of its long journey. These spaceships were superceded by 2018 due to improvements in propulsion.

The Enterprise includes a pressure chamber that is intended to treat decompression-related illnesses, but is co-opted by Khan into a painful method of execution for Kirk.

Things to come: Khan will be back, of course, played again by Montalban in Star Trek II and by Benedict Cumberbatch in Star Trek Into Darkness.

Space Bilge: Does Khan really think he can get away with stealing a starship and taking over a colony planet? Doesn’t he realise that there’s a whole fleet out there who will come after him and blow him to smithereens?

During the climactic fight between Kirk and Khan, the Captain is very obviously played by a stunt double who looks nothing like William Shatner.

Verdict: An undisputed classic, sold by the interplay between Shatner and Montalban. The future history of Star Trek universe is fleshed out, revealing dark secrets in the Federation’s past. Khan is a perfect villain for the original Trek, both physically and mentally able to take on Kirk and Spock and believably best them. It’s easy to understand why this episode was chosen as the basis for the story of the second movie (and less so the twelfth).