I Was Raised by Spacemen - 1 (Mike and Angelo, Watt on Earth)

This is the first in what I plan to be a series of posts, looking back at the science fiction and fantasy of my childhood. I've experienced a severe pang of nostalgia lately (probably to be attributed to a night spent singing along to cartoon theme tunes on YouTube with my best friend - so yes, this is your fault, Shelly). I realise, of course, that the golden era of children's telefantasy was the 1970s. Being born in 1984, I arrived rather too late for that. Nonetheless, I look back with fondness at the series that played during my youth, and thanks to the wonder of the internet, I can relive some small part of it. It's true that nineties TV is not as good as I remember it  - but then, whatever is?

Firstly, I'm going to look at two series that are frequently confused with one another: CITV's Mike and Angelo and CBBC's Watt on Earth. Raising the question with friends and family of my age - "Do you remember Mike and Angelo?" - what I usually get is a blank look, followed by a moment of revelation and an "Oh god, yes." However, it usually seems that what they are remembering is Watt on Earth, in spite of this series having a far shorter run and, to my mind, being considerably less memorable. And yet, when I come to watch them again, the tables are turned.

Mike and Angelo was a children's sitcom that seemed to run forever. In fact, it ran from 1989 to 2000, an eleven year period which corresponds pretty much exactly with my TV-watching childhood. Before '89, I am unable to remember much of what I may have watched. After 2000, I had, ostensibly, grown out of that stuff (I grew back into it pretty soon after though). A run of 123 episodes over twelve seasons is not to be sniffed at, and the series is remembered fondly by those who grew up in Britain during the nineties. The episodes were twenty to twenty-five minutes long, designed to slip between ITV ad breaks, and with, on average, ten episodes a year, there was reasonable time for them to make an impression. 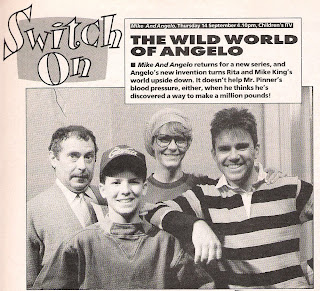 The series was written and created by Lee Pressman and Grant Cathro, the writing team previously responsible for T-Bag (oh yes, there'll be an entry on that one) and later Spatz, another fondly remembered CITV sitcom. A lot of actors crossed over from Mike and Angelo to Spatz and vice versa. The two shows were mainstays of my childhood.

I don't think it's any coincidence that Mike and Angelo sits right in Doctor Who's Wilderness Years. It's pretty blatantly clear that, if not full-fledged fans, Pressman and Cathro were at least influenced by Doctor Who. Angelo is an extraterrestrial from Ptarg, a distant planet, possibly in another universe (if continuity announcers are to be believed), who arrives on Earth (Cricklewood, to be precise) in a pyramidal spaceship that disguises itself as a wardrobe. The spaceship acts a portal of sorts, letting the occasional Ptargian creature or doodad through to cause trouble, but more often than not, it was Angelo's schemes and inventions that caused the problems.

Angelo himself was played, for the first two series, by Tyler Butterworth. The accomplished comedy actor is the son of Peter Butterworth, most famous for his Carry On roles, but well known to Doctor Who fans as the Meddling Monk (thus, in my diseased head, Angelo is the offspring of renegade time traveller the Monk, perennial thorn in the Doctor's side). At the beginning of the third series, Angelo regenerated, with near-death Angelo One transforming into the manic Angelo Two, played by manic, multi-talented Tim Whitnall. Whitnall remained in the role for the full ten years until the show was cancelled, and is thus much better remembered than Butterworth. They both had the ability to walk on the ceiling, though. Here's the title sequence from around 1996, in which Angelo arrives in his spaceship (already in his Whitnall incarnation, though):


As for Mike... there were four Mikes over the course of the series, one of whom was a girl. The first Mike was a Bostonian who moved to London his mum Rita, discovering the extraterrestrial wardrobe in their new house and becoming firm friends with Angelo. He was played by Matt Wright, while Rita was played by Canadian actress Shelley Thompson (in the UK, Canadians and Americans are simply interchangeable). Mike and Rita continued as the main characters through Angelo's regeneration, until series four, where Mike returned to America. He was replaced, temporarily, with Ellie, played by Jade Magri, and I remember nothing about this period of the show.

Series five brought in the new Mike, played by unnerving Aryan girl-boy Michael Benz. This phase of the show is the best remembered, with Mike 2 (Rita's nephew) becoming the longest serving of the Mikes. Benz grew up with the show, being well into his teens by the time he left in 1998. During this period, Rita left and was replaced by stroppy Scots housekeeper Katy, played by Katy Murphy. When Mike 2 left, Mike 3, aka Michaela aka Mickey, arrived, played by Gemma Gregory, giving the show a shot in the arm. She lasted only a year, though, replaced for the twelfth and final series by Mike 4, played by Steven Geller (previously of another fondly remembered Cathro-Pressman series, Microsoap). 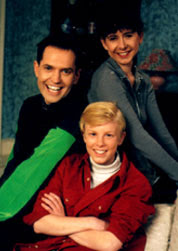 It'll always be the long-running Whitnall-Benz years that are most clearly remembered by fans. At the beginning of this year, the CITV channel ran an 'Old Skool' weekend (why was I not informed?) Thus, there are some episodes on YouTube in reasonable quality. Watching it again, I;m struck by two things. One, I remember the episode 'Fuzzball' like I watched it yesterday, despite it being a Butterworth episode and therefore from when I was only five years old (perhaps I caught a later repeat?) Secondly, the series really wasn't very good. There are some terrible actors in there, although the regular cast are all pretty good, and the slapstick humour is mostly awful. But god, I loved this as a kid, and sometimes a bit of nostalgia can't be beaten. There's a fabulous episode guide to the full series at Glad You Remember.

There are two things I'm dying to see, though, and if anyone has a link to the footage or is able to upload it, please let me know: the regeneration scene from the beginning of season three, and the episode from series six featuring Ron Moody (!) as Angelo's dad (clearly a regenerated Monk, between the Peter Butterworth and Graeme Garden incarnations). Let me know if you have these!

Watt on Earth was a series with a similar premise to Mike and Angelo, but played straighter. It still had plenty of comedy moments, but wasn't the out-and-out comedy that M&A was (which, thankfully, meant no godawful laughter track). It ran for two series on CBBC in 1991-2, notching up twenty-four episodes. Despite having only a fraction of the airtime that M&A had, Watt on Earth also made a big impression on kids of the time. It was written by Pip and Jane Baker, well known as the two worst writers in Doctor Who in the eighties. Surprisingly, though, it turns out to be pretty well written. You can catch most of it on YouTube, including the opening two episodes (episodes were a mere fifteen minutes long, so YouTubers tend to upload them in pairs).

Watt was an alien from a distant planet (can anyone tell me the name of it?), who escaped to Earth and hid out in the home of the Ruddock family. Unlike Angelo, who was merely childish, Watt was actually a child. Despite appearing to be in his mid-twenties, he was actually three hundred years old, but given his race's three thousand year lifespan, this made him the equivalent of about a seven or eight-year-old boy. He was played by Garth Napier-Jones, who gave the character a good sense of childlike innocence. 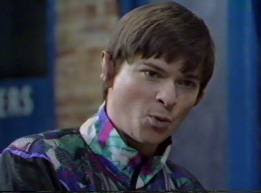 At first glance, Watt is very like Angelo, down to the awful approximation of Earth clothing. He's a far more inquisitive, more melancholy character though, continually bemused by life on Earth. Watt's human appearance was merely a disguise; his people had the ability to "transanimateobjectify," - ie. shapeshift. The problem was, being so young, Watt hadn't got the hang of this yet, and always got something wrong. In the first series his ears were on backwards, while in the second they were green (for some reason, I remember him having a green nose at some point. Funny how you can misremember things). He often wore a deerstalker to cover his ears when dealing with human beings.

As Angelo had Mike, Watt had Sean, an eleven-year-old boy played by Tom Brodie. Sean's situation was a more traditional family setup, with both parents and a nosy sister named Zoe. Much of the drama and comedy came from Sean's attempts to keep Watt secret, with his shape changes often getting him into greater danger - he'd turn into an apple or a bun and almost get eaten, for example. Watching the opening two episodes on YouTube, I found myself remembering it almost word for word as it played, and was surprised how well it had aged. I could have done without Watt's continual exclamations of "Black holes and quasars!" Cute the first time, aggravating the nineteenth.

Watt was on Earth in an attempt to escape his evil uncle, who had sent the sleazy agent Jemadah, played by John Grillo, a familiar face on British TV during the early nineties. The evil uncle himself was voiced by Michael 'Giant Robot' Kilgariff. It was revealed that Watt was the heir to his world's throne, and in the final episode, he left to take his rightful place as ruler, never to be seen again.

It's easy to see how Watt on Earth and Mike and Angelo could be confused, but they are quite different takes on a similar starting concept. Of the two, Watt has aged better, probably because it relies on drama as well as comedy. Still, I'll always have a soft spot for Mike and Angelo, and that theme tune makes me smile every time.
Posted by Daniel Tessier at 13:25

Email ThisBlogThis!Share to TwitterShare to FacebookShare to Pinterest
Labels: I Was Raised by Spacemen, kids' TV