TOS 1.27: Errand of Mercy
or
Captain Kirk vs the Klingons

The Mission: With the Federation on the verge of war with the Klingon Empire, the Enterprise is ordered to secure the strategically located planet Organia.

Planets visited: Organia, a class-M planet located in an area disputed by the Federation and the Klingon Empire.

Famous firsts: First appearance of the Klingons and the Organians.

Captain James T: Truly believes that gaining the alliance of the Organians would be the right thing for their people, in light of the threat posed by the Klingons. In spite of his high-sounding words, he seems to relish a bit of violence. Nonetheless, he stuns Klingon guards rather than kill, and does his utmost to keep the Enterprise out of the conflict until back-up arrives. He despises the apparently weak-willed, socially stagnant Organians almost as much as Kor does. Indeed, the two of them are more alike than he’d ever admit, but Kirk seems genuinely relieved, once he gets over his initial anger at the Organian interference, that the war has been averted.

Green-Blooded Hobgoblin: Despairs of the human propensity for violence, but is perfectly willing to fight alongside Kirk and has no qualms in appealling to the Organians to accept the Federation’s protection. He poses as a Vulcan trader, apparently a common enough sight in the region, to hide from the Klingons, and is capable of holding up the charade against the mind-sifter, due to his formidable mental defences.

The Klingons: They’re generic sci-fi baddies here. There’s a cool leader and a bunch of goons to back him up. Commander Kor has dark skin and a slightly oriental look, with a Fu Manchu-style beard and ‘tache. The rest of the Klingons are just white guys with a bit of darky make-up on, and no real attempt is made to make them stand out. The Klingons are unquestionably villainous; Kor regards war as glorious, despises the Organians as weak, slaughters civilians and uses a torturous mind-sifter on his prisoners. 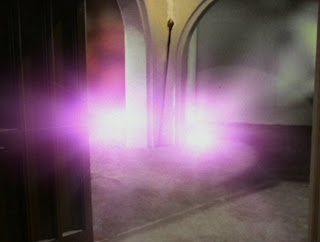 The Organians: At first glance, they’re just another human-looking alien race, living at a primitive, post-industrial stage of development. Spock’s tricorder somehow detects their level of historical development, and he decrees that they have advanced nowhere for thousands of years. They’re incredibly placid, refusing to fight back against the Klingon invasion force or even assist Kirk with his work against them. Their leader, Ayelbourne, refuses any kind of alliance with the Federation. It turns out, of course, that the Organians are actually hyper-advanced, incorporeal beings with great powers, having long ago evolved beyond the physical plane. Everything they present on their planet is an illusion; two of them eventually manifest as blinding balls of light, although we have no way to know if this is their true appearance (if they can even be said to have one). They regard the presence of primitive, violent creatures like Klingons and humans as nauseating. They can apparently affect events over a distance of light years, with Ayelbourne claiming to be present concurrently on Organia, Earth and the Klingon planet.

Future History: War has been brewing between the Federation and the Klingon Empire for some time. Kirk has knowledge of the slavery imposed on Klingon occupied planets, and there’s no indication that he’s lying, even if he is trying to convince Ayelbourne to side with him. The Organian intervention halts the eruption of all-out war between the two powers. Later episodes will refer to the Organian Peace Treaty, so a formal agreement is clearly reached, although some hostilities continue. What happened to the Organians after this is unknown; they probably just washed their hands of the primitive cultures, and left them to it. Ayelbourne predicts that the Federation and the Empire will one day become “fast friends.” He’s right, although it’ll take some time before it truly comes to pass, and over a century later, there will still be breakouts of aggression.

Trek Stars: John Colicos gives a rich performance as Commander Kor, making the most of being the sole Klingon character (as opposed to a faceless goon). They kept trying to bring him back, but didn’t manage it until Deep Space Nine, in which he appeared in three episodes.

Sexy Trek: No skirt on offer here for Kirk, but the Kirk-Spock bromance is stronger than ever. Kor seems to have a bit of a thing for the Captain.

Cliché Count: Plenty of fisticuffs for Kirk. Spock calculates odds for fun. The Klingons aren’t a Trek cliché yet, but they will be. The hyper-advanced energy beings who are as gods are certainly a cliché already.

Verdict: It’s a slow, talky episode, which somehow fails to be livened up by Kirk and Spock’s terrorism and explosives. The Klingons are generic goons, saved by Kor, who steals the episode. You’d never guess from this episode that they’d become such a major part of the Trek legend. Reasonably entertaining, but nothing special.


TOS 1.28: The City on the Edge of Forever
or
Captain Kirk vs History 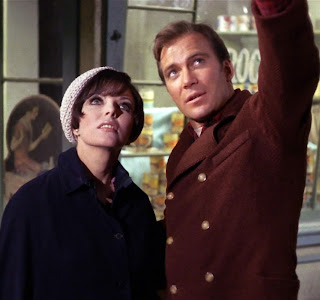 Planets visited: The unnamed planet of the Guardian; a barren but habitable world littered with the ruins of million-year-old cities. Thence, to the Earth, in 1930.

Time Travel: The Guardian of Forever, a torus-shaped stone-like object, is both a living being and a machine, and has the power to allow time travel. Its activity creates ripples in space-time which emanate from its planet and throughout the local region of space. It is capable of speech and some reasoning, and claims that is awaiting “a question.” Although it is clearly intelligent to some degree, it seems limited in its programming, and can only show events from history at a rapid rate. As the landing party watch, the images on its screen flit through points in Earth’s history (although, from the stock footage used, it could equally be showing the history of cinema). While it can’t slow the images down, it can repeat them.
When an individual steps through the portal, he is deposited at the point in space-time that was being shown. Mad McCoy steps through into 1930, and the immediate effect, from the point of view of the landing party, is the alteration of history, so that the Enterprise no longer exists, marooning them on the surface. Kirk and Spock are able to use Spock’s recordings of the images to find the correct point, roughly speaking, to step through the portal and preempt McCoy’s change to history.
In 1930, McCoy prevents Edith Keeler from being hit by a car and killed, altering history. Kirk and Spock manage to stop this; Edith dies, and history is restored. The Guardian seems to protect the landing party from the effects of the change to history, allowing Kirk and Spock to go back. Indeed, it probably helps isolate the images Spock needs to both travel to the right point and learn what divergence occurs; if not, his piecing together of the facts of two timelines using just his tricorder readings is incredibly lucky. Whatever the alterations made to history, the Guardian is unaffected by them. It implies that it’s billions of years old, although the ruins date back merely a million years or so.

Future History: Around a century after the events of the episode (so about 2030, if Kirk’s accurate) a novelist living on a planet orbiting the far left star in Orion’s Belt wrote a work on the theme of the phrase “Let me help,” which he rated more highly even than “I love you.” This star is Zeta Orionis, also called Alnitak or Alnilah, over 700 light years from Earth.

Alternative History: In the timeline in which Edith Keeler lived, she headed a hugely successful peace movement, which delayed the United States’ entry to WWII. This gave Nazi Germany the time necessary to develop the atomic bomb, which it deployed with its V2 rockets and allowed it to win the war, and go on to dominate the world. We don’t know what happened to the people of Earth after this, but at the very least, the Starfleet we know did not exist in this timeline.

Captain James T: Immediately takes to Edith, and develops a healthy respect, and later, love for her. The attraction is mutual, even though she suspects him to be a criminal at times. He makes a good cleaner, surprisingly. He avoids lying to Edith, and allows more and more anachronistic information to pass his lips as his trust in her grows. Despite his love for her, he stops McCoy from saving her life, making an incredible sacrifice to save the future he knows.

Green-Blooded Hobgoblin: Seems to have real empathy for Kirk’s loss, hinting at something in his past. His technical prowess is second to none, and he takes a little offence when Kirk suggests that building a computer in the Thirties is asking too much of him. He and Kirk are extremely comfortable with each other by now, engaging in good-natured banter.

The Real McCoy: Carelessly injects himself with cordrazine, an incredibly powerful stimulant that sends him paranoid crazy and turns him into a handy plot device when someone is required to jump headlong into a time machine. Once he’s back to his old self, he’s straight in charming Edith; as usual, Kirk’s got there first.

Future Treknology: Spock is able to cobble together a computer system to access the records in his tricorder using what bits of primitive tech he can find around the local vicinity in 1930. He describes the available materials as like “stone knives and bearskins,” and would prefer some platinum. An unfortunate tramp vaporises himself with McCoy’s phaser (those things really need better safety features).

Funny Bits: Kirk improvises to a policeman that Spock is a Chinese man whose ears were damaged in an accident with a rice-picking machine in his youth!

Musiks: Goodnight, Sweetheart is playing on the wireless as Kirk and Edith walk past the local radio repair shop. It’s later worked into the soundtrack.

Looking Ahead: The crew revisit the Guardian in the animated episode ‘Yesteryear.’ It appears several times in the books, most recently in C. A .Bennett’s DTI novel Forgotten History, and we learn that Starfleet, sensibly, has kept its existence secret.

Author, Author: Harlan Ellison is credited for the episode, although it was significantly altered from his original script. Of course, he tried to sue, because that’s what Ellison does.

Trek Stars: Edith is, of course, played by Joan Collins, pretty much the most famous face to have appeared in the series.

Trivia: Men Behaving Badly once based an entire episode around the cast watching this show.

Verdict: A powerful, dramatic episode rightly regarded as one of the best, if not the very best, of the original Star Trek. It takes a fairly straightforward time-travel concept and uses it as the basis of an affecting emotional drama. Edith Keeler is a character you can genuinely believe the Captain has fallen in love with, and the final moments are heart-breaking. Beautiful stuff.