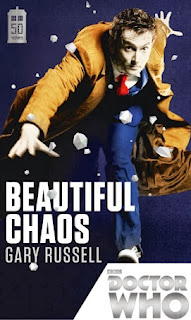 Donna Noble proved to be one of Doctor Who's most popular companions, but she got pretty short shrift in the novel line. While Rose spanned the ninth and tenth Doctor's eras, and Martha enjoyed an extended run of adventures with the tenth, Donna's time was cut short. 2008's earlier batch of three BBC hardbacks featured Donna, but the latter set, released on Boxing Day, comprised The Story of Martha, a flashback to series three, The Eyeless, a solo adventure for the tenth Doctor, and this, Donna's final adventure on the printed page.


Series four had left viewers reeling from Donna's painful forced departure, and left the Doctor adrift, alone save for occasional, one-off companions. So it's not surprising that this story takes a retrospective, mournful look at Donna's time with the Doctor. The prologue and epilogue are, in fact, set after the events of Journey's End, framing the adventure and putting it in perspective. This was how good Donna could be, with the Doctor to bring out the best in her, but now those days are over.


Gary Russell is a tried and trusted author, having written numerous novels for both Virgin and the BBC, as well as having edited Doctor Who Magazine in the nineties and run Big Finish for its first seven years. Following the publication of Beautiful Chaos, he script-edited David Tennant's final three episodes. This man knows his stuff. While Russell's novels are rarely considered the best of their ranges, he consistently writes solid, readable adventures. Beautiful Chaos is one of his best efforts.


The BBC novel range had settled unto its stride by 2008, and while the best was still to come, the output was generally high quality children's fiction. Maybe not His Dark Materials, but certainly on a par with the best of the Targets and better than the bulk of media tie-in prose. The best novels took what was set up in the TV series and built upon it, as Russell does here. Beautiful Chaos features the Doctor returning Donna to her home in Chiswick on the anniversary of her father's death. A sense of mortality hangs over the story, reminding us that our time on this world is brief and that we should make the most of it while we can. This is emphasised not only by the significant death toll of the novel, but also developments concerning Donna's family.


Sylvia, Donna's frequently disagreeable mother, is presented as barely holding on through her grief following the death of her husband. Her daughter's sudden, poorly explained absences don't make things any better. Sylvia, although still sniping and angry, is a far more sympathetic character than she got much chance to be on TV. More central to the plot is Wilfred Mott, grandfather of the Noble household. The time spent up on his allotment with his telescope has not gone unrewarded; he's discovered a new star, and got it named after him him to boot. What's more, he has a new lady friend: the delightful Netty, a confident, no nonsense woman who's come through everything life can throw at her. Only now, life is taking its toll, and Netty has developed Alzheimer's. The passages in which Wilf relates the difficulties in caring for Netty, and the knowledge that he will one day lose her, are heartbreaking. To his credit, Russell doesn't succumb to the temptation to grant Netty some miraculous sci-fi cure. Alzheimer's is presented as it really is: progressive, unstoppable, and devastating.


While the relationships between the characters are at the heart of the novel, they are explored through an engaging sci-fi plot. Gary Russell has never been one to shy away from continuity matters, and while he's no Craig Hinton, Beautiful Chaos revels in its status as part of the Doctor Who universe. For starters, it's an unabashed sequel to The Masque of Mandragora, featuring an updated version of the Mandragora Helix menacing the Doctor once more. Russell then proceeds to acknowledge all the other sequels to that serial, just to make certain that we understand they still happened, but that this is the big one. There are a handful of other cheeky asides, and it works both ways: Netty gets a namecheck in Tennant's swansong The End of Time. 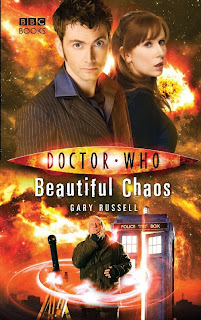 For once, the Doctor doesn't come off especially well. While Donna and Wilf are quick to defend and praise him, we can see why Sylvia hates him so much. His attitude to family life is skewed, from a human perspective, he's quite capable of manipulating his friends in the pursuance of his goals, and he admits that it was he who accidentally brought the Helix to Earth in the first place.

Beautiful Chaos is a pacy adventure that still finds time to include quieter moments of introspection, matching the tone and verve of the later Tennant episodes but remaining thoughtful throughout. One of Gary Russell's better novels, and one of the strongest of the tenth Doctor adventures.
Posted by Daniel Tessier at 19:35