The Mission: Escape the Borg and return home. It's Voyager, five years early.


Planets visited: None as such. Q throws the Enterprise over seven thousand light years across space, to star system J-25. (Given what we learn later of the location of Borg space and the layout of the galaxy, this is probably deep into the Beta Quadrant, still well outside the Borg's main territory.) 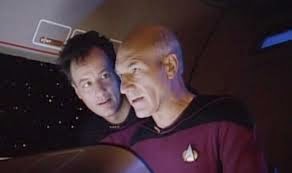 Q: Following his previous dicking about with the Enterprise crew in season one, Q has been kicked out of the Continuum and is now homeless. Well, assuming he's not lying and it's just another one of his tests. He wants to join the Enterprise crew, petitioning Picard in the only way he knows how – by annoying him into submission. It doesn't work, and when Picard refutes Q's claim that they need him, he throws them across space into the path of...


The Borg: At last. After the rubbish attempt at a new baddie they gave us with the Ferengi, the TNG team create a proper alien menace. Q describes the Borg best: “The Borg is the ultimate user. They're unlike any threat your Federation has ever faced. They're not interested in political conquest, wealth, or power as you know it. They're simply interested in your ship, its technology. They've identified it as something they can consume.” 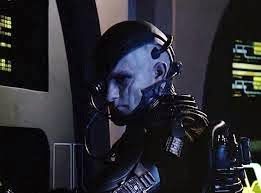 The Borg are humanoids with cybernetic enhancements grafted into their bodies. The away team finds babies on their ship, in coffin-like cots, already in the process of being augmented. They operate with a collective consciousness, unified by a single will, with no sense of individuality. Their only interest is in technology, and they will take anything they see worthy of use. The death of one Borg is meaningless to them; another will be along to replace it. They can adapt to the weapons of the Enterprise; a phaser blast fells the first intruder, but is repelled by the second. They just keep coming; they are relentless.


The Picard Manoeuvre: Picard is at his most arrogant and disagreeable here. Q does not bring out the best in him. Knowing that he will not simply agree to allowing Q to join the crew, the superbeing whisks him away in shuttle to the middle of deep space and threatens to keep him there until he listens. Q is willing to stay there for decades, and you can fully believe that Picard is so stubborn he'll keep him waiting that long. Picard is totally out of his depth in the fight against the Borg, but has the balls to admit it, and asks Q for help. This impresses Q enough to send the ship back where it came from, out of harm's way.


Number One: Remains pissed off at Q for his interference in his life in previous episodes. He's got the guts to go poking around the Borg ship when it's briefly disabled.


Elementary, Dear Data: Seems worryingly impressed by the Borg and their technological society. He'll get closer to the Borg in future, than anyone save Picard. 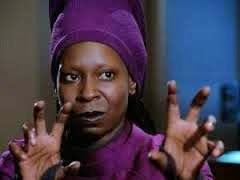 Hat-tastic: Well, then. Finally, we get to learn something about Guinan, and she's been hiding some secrets. For a start, she's been in this part of space before, something Picard is aware of (possibly, she's from there originally). She knows the Borg of old; they destroyed her home planet, although she wasn't there at the time. More intriguingly, she knows Q, and they do not have a good relationship. He describes her as “an imp,” knows her by a different name, and warns Picard to get rid of her. She even seems to be able to defend herself against Q, if her stance in his presence is anything to go by. Altogether, this paints her as far more dangerous and powerful than any other time we've seen, but the questions remain unanswered in the series.


Crew Roster: It's the first appearance of Sonya Gomez, clearly designed as a recurring character and a love interest for Geordi. She's played by Lycia Naff, and is pretty gorgeous and adorable. The Enterprise crew is already so capable that having a green recruit onboard to sympathise with is a good idea, and Sonya is perfect for this. She's polite to the drinks dispensers (she'd do well on Red Dwarf), immediately throws hot chocolate all over Picard and is understandably utterly terrified in the engagement with the Borg. She's a great character, but is only in the show for two episodes. 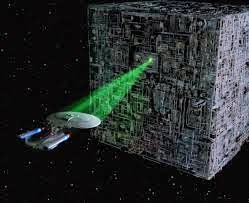 Starships: The Borg Cube, an iconic Trek design. It's an eminently sensible design for the Borg to use; completely decentralised, a platonic shape with no need for aerodynamics or aesthetics beyond the mathematical. It comes across as just as much alive as the Borg themselves, healing from its wounds. In fact, it's less a ship, more like a body, with the Borg as cells performing functions within. The Cube is capable of holding the Enterprise in place with a tractor beam, and carving chunks out of it like a turkey.

Best line: Too many to choose from, but here's some of Q's finest:


“You judge yourselves against the pitiful adversaries you've encountered so far. The Romulans, the Klingons – they're nothing compared to what's coming.”


“If you can't take a little bloody nose, maybe you should go back home and crawl under your bed. It's not safe out here. It's wondrous, with treasures to satiate desires, both subtle and gross. But it's not for the timid.”


“Microbrain! Growl for me, let me know you still care!”


Links: The devastation of the planet at J-25 match that of the outposts along the Neutral Zone seen at the end of the previous season. Q's actions in “Hide and Q” supposedly have led to his being evicted from the Q Continuum.


Focus on... Q and the Borg: There's a debate among fans as to whether Q did the Federation a favour in introducing them to the Borg, or whether he endangered them by alerting the Borg to their existence. I'm firmly of the opinion that he helped them. There's no doubt that the Borg were already aware of the Federation and their region of the galaxy, as the attacks along the Neutral Zone show. Later episodes, in Enterprise and Voyager, indicate that the Borg knew of the Federation decades, if not centuries before these events.


Guinan points out to Picard that, now the Borg are aware of their existence, they will be coming. Yet, they were already coming. Feasibly, the sudden appearance and disappearance of a Federation starship in their hunting grounds might have encouraged the Borg to begin the invasion, but this was merely pushing them ahead of schedule. The Borg were slowly advancing across the galaxy, sending out ships to take samples of alien civilisations for future harvesting. Starfleet would have been taken completely unawares, had Q not allowed Picard this sneak peak of his future. (Q explicitly calls this a glimpse of what's to come.) An early invasion fought off with vital foreknowledge is far better than a later one that comes completely out of the blue.


The Verdict: One of the best single episodes of The Next Generation's run, easily the best of the season, a complete turnaround of fortune for Picard and crew. Genuinely thrilling, the desperate race to escape the Borg is one of the series' finest hours, with the almighty Starfleet for once completely out of their depth, lost and alone in a deadly part of space. As brilliant as it is in itself, “Q Who” will be remembered for its legacy. Star Trek was the never the same again.