The debate surrounding the portrayal of female characters in comics has now broadened to encompass the movies. Den of Geek have posted a piece calling for more female superheroes who are less obviously attractive and designed to fit male expectations, one that has been met with a fair amount of feedback from both sides of the equation. Frankly, I can see their point, but I think they're missing it somewhat as well, for a number of reasons.

Firstly, yes, woman are used as titillation material in these films. It's not just comicbook movies; I've already complained about the portrayal of Dr. Carol Marcus in Star Trek Into Darkness. However, I don't think that there's anything wrong with a little titillation (or bumillation), as long as that isn't all there is to a character or that there's at least some context. In my view, one of the best ways to approach it is to have the male characters be subjected to it as well. Indeed, Marvel does this plenty. Tony Stark, Steve Rogers and Peter Quill all get fan-service shots of their topless chests. Chris Pratt's impressive torso was even a major selling point of Guardians' trailer, just as much as the sultry shots of Zoe Saldana as Gamora. Gamora is used as an obvious example in Den of Geek's article, and there are problems with her portrayal. As I said in my review, the supposedly badass alien is mostly a damsel in distress until she faces down Nebula, upon which we get to aesthetically pleasing females battling it out. On the other hand, I honestly think there's less ogling done of Gamora than of Star Lord. It could be argues that perving on the men is just as making it a broader problem, but personally I feel it just evens things up. By all means, give us eye candy, so long as we get decent characters with it. 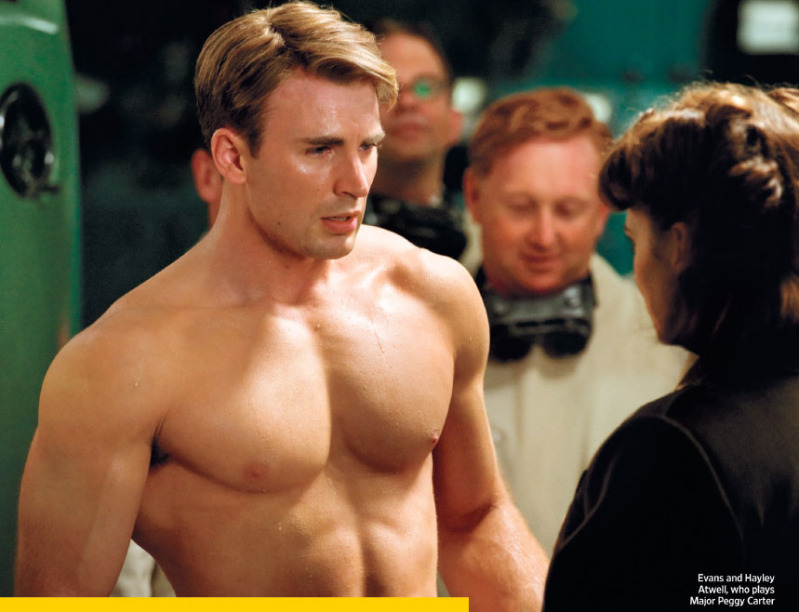 It's certainly true that we get one specific kind of female hero in these films. Zoe Saldana, Chloe Bennett, Coby Smulders, Karen Gillan - all very slim, lithe women who look good in tight leather. Only Scarlet Johanssen mixes it up by adding some real curves into there, and she's hardly large. Is it an unrealistic image for women to aspire to? Yes, it is, but no more so than Dave Bautista's rippling muscles or RDJ's extreme handsomeness are for men. I'm all for more variety in form in both comics and movies, but come on, look at film and TV (especially in America). Everyone is gorgeous. I was just watching an episode of Arrow. Even the IT girl is a model. Pretty people sell tickets and DVDs.

There's definitely a difference in the portrayal of men and women in comics and film. Male heroes are expected to be physically impressive, muscular and strong. Female heroes are expected to be beautiful and sensual first, strong second. And yes, there's a lot of work to be done there. A film can still be made and do well with an older or less obviously attractive male lead, while it's rare to see anything headlined by an older woman. This is something that needs to change. Still, expecting the pretty people to go away is unfeasible. And really, using She-Hulk as an example... are they serious? Jennifer Walters is a fine example of female comics characterisation, but when she's She-Hulk she's green tits and ass. A She-Hulk movie could be great, but does anyone really think we won't get someone drop-dead gorgeous in the role?

Some movie-makers are worse culprits than others. I'm sure that if Michael Bay could somehow hire Megan Fox's arse without having to pay for the rest of her, he would do so. But so long as we can have a decent actor doing a good job of portraying a well-written character, then I will happily accept the bonus of having a gorgeous person in the role. It's just a problem when those first few criteria aren't met.

Marvel aren't perfect. Those posters for The Winter Soldier that morphed Black Widow into bizarre proportions were horrible (Chris Evans didn't avoid the photoshopping either, but it wasn't so obvious). We're supposed to root for Chris Pratt's womanising star traveller, who forgets he has his latest shag in his spaceship. On the other hand, Gamora did resist the cliche of being won over by his charms, so that's something. (Let's see what happens when she meets Tony Stark though.) We really need a movie centred on a female hero, be it She-Hulk, Black Widow or Captain Marvel. However, appearance wise, the Marvel movies are still ahead of the comics. If Gamora had dressed like her comics counterpart, she'd have looked like this: 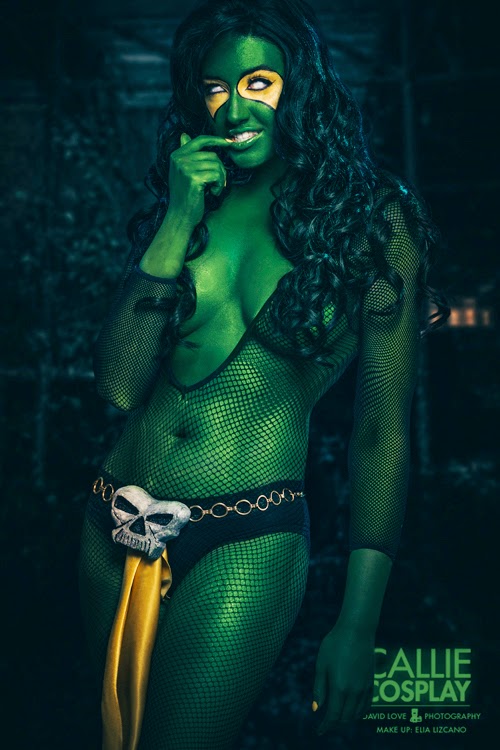