This is the first installment of what will be my guide to all twenty-six episodes of the magnificent, idiotic, ingenious anime Space Dandy! The entire series is available on Netflix in the UK and US, both in the original Japanese with subtitles and in the English dub. This is a guide to the dubbed version, although there are episodes where sticking the subs on reveals some more information that's been lost in the translation to the brilliant English script. 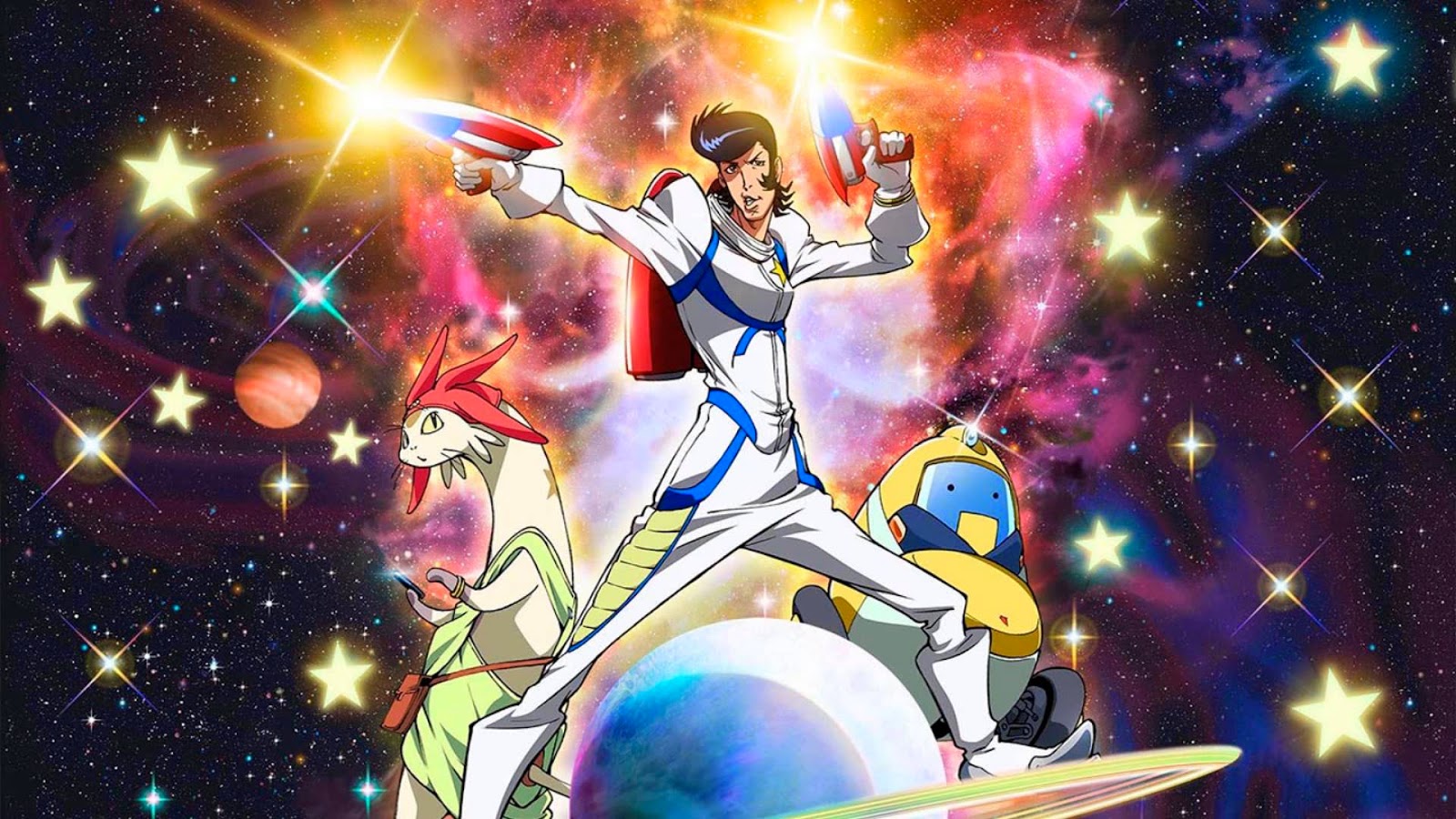 Space Dandy is a dandy guy... in space!

Series One, Episode One - “Live With the Flow, Baby”


It is Space Century 0014. We Meet Dandy and QT, and they meet Meow, while they search for new aliens at their favourite hideout, BooBies. Meow promises them he knows a planet that's full of mysterious alien species, so they set out in the Aloha Oe, but when accidentally engaging the malfunctioning warp drive, they burst through the outer dimensions, a continuum criss-crossed with cosmic strings. Dandy, of course, pulls on one, becoming dragged across space/time via the fabled element of pyonium. They are pursued by Dr. Gel of the Gogol Empire, but, stuck on a deadly planet inhabited by terrifying aliens, Dandy elects to engage the supernova device. Everybody dies. The End.

He's Dandy, Baby: His name's Dandy but you can call him Space Dandy. He's an ass man, as all right-thinking men are. An “elite” alien hunter, Dandy hunts for undiscovered species and returns them to the Alien Registration Centre for payment. He visits BooBies regularly, ostensibly because it's an alien hangout, but also because the drinks are cheap, the ladies are lovely and because he has one overriding mission: to visit every branch of BooBies in the Galaxy. Dandy goes with the flow; that's his pure philosophy. When confronted by the interdimensional majesty of a cosmic string, Dandy's first reaction is to yank on it. He doesn't really think his plans through, and gets himself and his crew killed.


He's Just a Little Obsolete, Baby: QT is a service robot Dandy picked up cheap on some backwater planet. His drives are out of date, he can't update his programmes because his operating system is too old, and he needs to consult the Alien Hunter's Guide to supplement his database. His battery life is terrible, and he gets pretty thick when he's in power save mode. He's not impressed by Dandy's attempts to educate him in the finer things in life.


He's Not a Space Cat, Baby: Meow – short for Mrrrmmrrrmmrrmmwww – is a Betelgeusian, an alien species that looks like a cat. But he's not a space cat, OK? He's hanging out in BooBies, perving on the girls and taking snaps of their assets. Why a feline alien wants to perv on humanoid girls is anyone's guess, but he's come to the right place. Initially, QT thinks Meow might be an unidentified alien due to an unusual mark on his cheek. It turns out this is a sticker he won for ordering the Gilgamesh tequila. He knows some obscure planets but really doesn't know how to navigate. 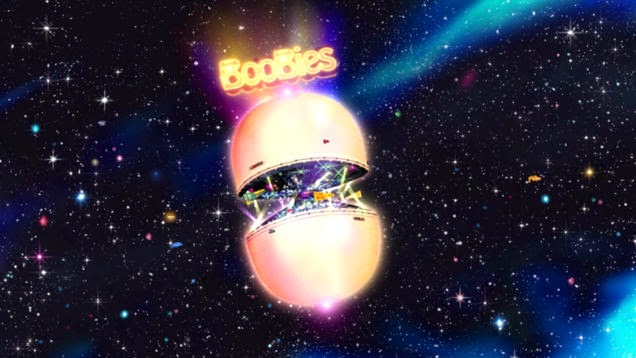 Let's Get Our Asses to BooBies, Baby: Where zero-g meets double-D, BooBies is a breastaurant, like Hooters or Twin Peaks, but in space! A space station shaped like a magnificent pair of bosoms, it is indeed an alien hangout, and has many beautiful waitresses, from every species with boobs. Truly, the appeal of the breasticles crosses the divide of culture and species. We meet our favourite recurring waitress, Honey, a blonde bombshell who is pretty easily distracted.


Tell My Story, Baby: The story is narrated by an mysterious voice, who is, strangely enough, audible to Dandy and QT. He pretty much phones it in though. I think he's only in it for the fourth-wall-breaking.


It's Tech in Space, Baby: Dandy has all manner of nifty gizmos for catching aliens, including a bola balls, a laser fishing rod, and of course, his trusty spaceship, the Aloha Oe. The warp drive is on the fritz, and in any case, Dandy doesn't like using it – he's heard too much warping makes your hair fall out. The ship's matter transporter is also out of date; it takes an age to warm up and a good five minutes to beam someone off a planet. Dandy's ultimate weapon is a surfer doll that sends the ship's drive into overload and turns everything in the vicinity supernova. Only an idiot would use it.


We're Alien Hunters, Baby: There are many varieties of alien life in the Galaxy, from humanoids to cat-like Betelgeusians to huge pink blobs. The planet the Aloha Oe is drawn to is inhabited by gigantic wyrms, in various flavours: fire-breathing, lightning-throwing and composed of water. There's also a huge green robot guy who comes out of the ground, and those are just the less weird ones. 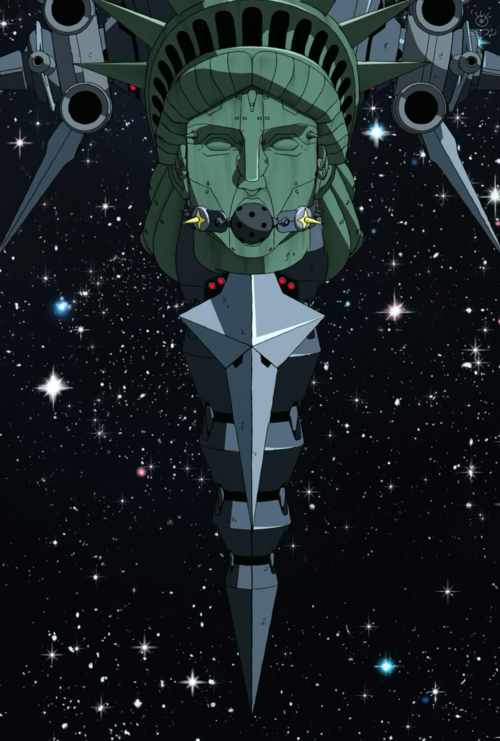 I Know This Planet, Baby: The planet promised by Meow is an absolute dive. It even begins collapsing under Dandy and Meow's feet. Damned space cat.


There's Bad Guys Too, Baby: The Gogol Empire and the Jaicro Empire are at war for the fate of the universe. The Gogol 7th Fleet of the Galactic Force is headed by Admiral Perry, a mighty villain with a flaming skull (not unlike the dread Dormammu, although his outfit is like Nightmare's from the Kirby games). Admiral Perry is after Dandy, for he, apparently, holds the key to the universe. He sends his agent, Dr. Gel after him. Dr. Gel is a hulking green primate, who flies a ship shaped like the Statue of Liberty, biting down on a ball gag. He is supported by his diminutive assistant, Bea. Neither survives the pursuit of Dandy.


Don't Quote Me, Baby: “Nothing trumps the rump, my friend; anyone who thinks otherwise is either blind or a fool.”

Bottom Line, Baby: It's just the introductory episode, of course, but this displays all the trashy, over-the-top absurdity of Space Dandy at its finest. There are hints of the greater mysteries to come, but from the off, it shows a joyous disregard for continuity and consistency, killing off every major character before drawing attention to the fact that this makes no sense whatsoever. Even the first episode is chock-full of references to other productions, from the warped Planet of the Apes inference of Dr. Gel and his Liberty ship to the monsters cribbed from Galaga. Not to mention that Space Dandy almost certainly takes place in the same universe (multiverse?) as Cowboy Beebop, starting with the use of Woolongs as currency. Some people hate the, well, boobiness of the whole thing, but it's a parody of the shameless fan service that many more popular anime series display (and a lot less graphic than some). It's puerile, ridiculous and over-excitable, but it's the foundation of what will be some truly intelligent science fiction in episodes to come.
Posted by Daniel Tessier at 11:19