2.15) The Trouble with Tribbles
or
Captain Kirk vs. Fluff 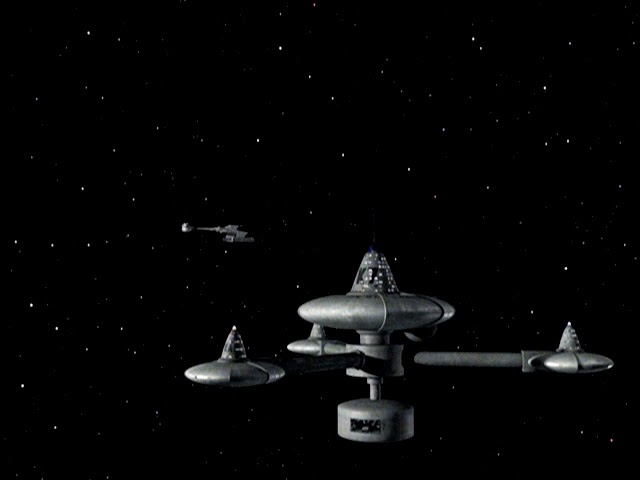 The Mission: Protect a vital shipment of grain called quadrotriticale bound for colonists on Sherman's Planet, which will be ceded to either the Federation or the Klingon Empire depending on who manages it best.

Captain James T: On great form here. I love how he's spoiling for a fight when he gets to K-7, and seems genuinely disappointed that the Klingons ahven't attacked and that he's just been called in to guard some grain. Once more, he's at odds with the local official, Mr Baris (William Schallert). He seems to be the only person who's never heard of quadrotriticale. He and the Klingon captain, Koloth, have crossed paths before.

Gree-Blooded Hobgoblin: For a logical Vulcan, he's really got the put-downs and quips nailed now. Deadpan delivery, of course. Whatever he claims, he likes tribbles.

The Real McCoy: Fascinated by the tribbles' biology. I've never seen him so excited without a woman nearby. He doesn't seem to know the difference between bisexual, asexual and hermaphroditic, though.

Tsar of all the Russias: Seriously has a complex about making Russia seem important. Given that he's on a fricking space station, you'd think a mention of Gagarin might be obvious, instead of making up shit about scotch being invented by “a little old lady in Leningrad.” Drinks wodka. Almost strikes a Klingon when he insults Kirk. 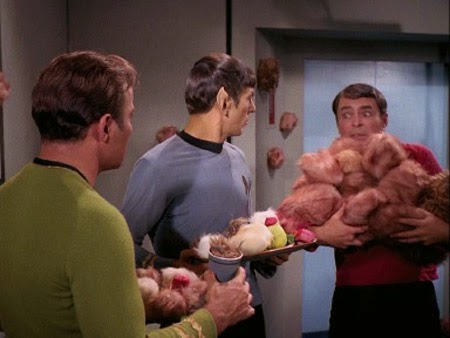 Great Scott: Thinks that vodka is a soda pop drink. He's very collected here, calming Chekov down when he's riled by Korax's insults.. until he insults the Enterprise, when he goes off on one and smacks the guy. Judging by his “no tribble at all” line, he has a very similar sense of humour to me. James Doohan did his own fight stunts.

United States of Africa: Uhura is a soft touch. It takes Cyrano Jones about three minutes to talk her into buying a tribble.

Klingons: Looking more like humans in light make-up than ever. So much so that it's really quite funny when the Deep Space Nine sequel mentions that their spy, Arne Darvin, must have had a good surgeon. All these Klingons need to pass as human is a quick shave. They hate tribbles (the feeling is mutual). They've poisoned the grain to disrupt the Federation's plans for Sherman's Planet. Klingons speak Klingonese.

Tribbles: Fuzzy balls of fluff that make pleasant chirrupping noises and everyone (except the Klingons) just thinks are so damned cute. They eat voraciously and reproduce extremely rapidly; they are self-fertilising hermaphrodites and are born pregnant. They have no teeth, so how they eat all that grain remains a mystery. They make excellent Klingon detectors.

Future History: Sherman's Planet was discovered by astronomer John Burke, of the Royal Academy in “old Britain” in 2067. The planet's governance is decided on the terms of the Organian Peace Treaty (a nice bit of continuity with the previous Klingon episode, “Errand of Mercy”).

Trek Stars: Koloth is played by William Campbell, who previously played the alien Trelane in “The Squire of Gothos.” He's the cheekiest Klingon ever. Campbell returned to the role – in full Klingon make-up – in the Deep Space Nine episode “Blood Oath.” Stanley Adams is pretty fabulous as galactic rogue trader Cyrano Jones.

Cliché counter: Kirk rubs a bureaucrat up the wrong way. Chekov drops some nonsense about something being discovered by a Russian. There's a great big fight, comedy music every two minutes and it ends with a joke and a big laugh from the main cast. But at least this episode is actually funny, so it feels right for once.

Things to Come: This episode was popular enough to spark two sequels: “More Tribbles, More Troubles,” in the Animated Series, and “Trials and Tribble-ations” in Deep Space Nine, the latter being the 30th anniversary episode which brilliantly spliced the current cast into the original footage. Tribbles will show up as set dressing in Enterprise and several movies, up to and including Star Trek Into Darkness.

The Verdict: There's a reason this is a fan favourite. A Star Trek comedy that's genuinely funny, this is great fun from start to finish. The cast are basically parodying themselves throughout, but it's in keeping with the atmosphere of this great little story. Kirk buried under a mound of tribbles is a wonderful image. No wonder they chose this one to rework for the 30th anniversary. The should have snuck Sisko into the back of a shot when they were remastering it.