2.16) The Gamesters of Triskelion 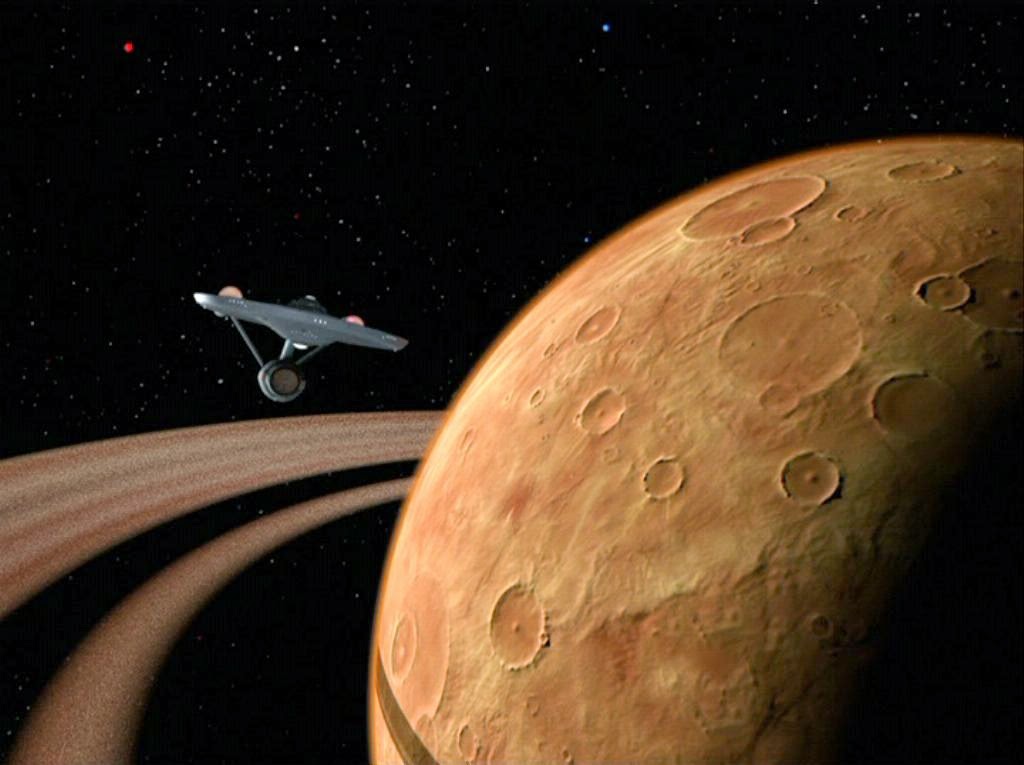 or
Captain Kirk vs. Gladiators

The Mission: Check up on an automated station/track down the missing away team.

Gamma 2: A barren, uninhabited planetoid that is the location of an unmanned communications and navigations station. In the remastered version it has a ring.

Triskelion: A planet in the treble star system M24-Alpha, 11.6 light years from Gamma 2. There was once a civilisation there, but now it's fallen into ruin.

The Providers: The remaining natives of Triskelion. There's only three of them left and they've been reduced to brains in jars. Very colourful brains in jars, at that. Once they had physical forms, and so on and so forth, heard it all before. Now they entertain themselves by betting their hard-earned quatloos on the thrall fights.

Drill thralls: Various humanoids captured from all over the Galaxy. They include: Shahna, a green-haired lady in a skimpy silver bikini who looks like Lady Gaga; Kloog, a big, hulking brute with tusks (who might be a Kalar from Rigel 7, as seen in “The Cage,); Lars, a statuesque rapist; Tamoon, a yellow-skinned tart with a manly voice; an Andorian and a black guy who gets used as training fodder. They're all controlled by Galt, a scary-ass wizard in an impressive collar. At the end of this, they win their right to self-government; which should be fairly straightforward, as there's only about twelve of them on the entire planet.

Captain James T: Sounds painfully bored at his check-up mission and genuinely cheers up when his transporter beam is zapped across space to Triskelion. His enthusiasm soon gives way to anger at the treatment of his crew (particularly Uhura) and the thralls. Kirk is such a charmer he manages to completley sway Shahna with some smooth-talking and a smooch – before punching her lights out. He bets his entire crew's freedom against those of the thralls, never stopping to consider whether he has the right to do so. Shatner's performance reaches new levels of intensity in this episode.

Green-Blooded Hobgoblin: Completely dismissive of Scotty when he says there was no malfunction on his end when the transporter beam is zapped across space. He maintains a stolidly logical apraoch to searching for his lost crewmates and almost sounds excited at the discovery of an ion trail.

The Real McCoy: Loses his temper at Spock, but soon calms himself down.

United States of Africa: Having Uhura point out the parallels between the Providers activities and the slavery on Earth is a fine approach. There's also no way around it: Lars attempts to rape Uhura, albeit off screen. It's a really upsetting scene, nonetheless. Uhura remains strong throughout the episode, though, refusing to victimise fellow slaves. She's definitely the best thing about the episode.

Tsar of all the Russias: He's a cocky little sod in this episode, until he comes face to face with his drill thrall – a yellow woman Tamoon, who really fancies him. 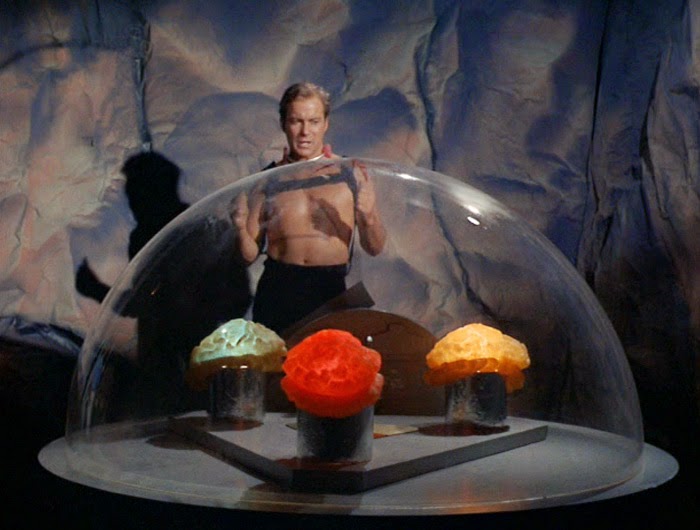 Great Scott: Scotty gets riled up by Spock's calm approach and is egged on by McCoy, before Spock reminds him of his place.

Trivia facts: This episode was parodied in The Simpsons in the episode “Deep Space Homer,” where Homer fought Barney for quatloos. That was better sci-fi than this, too.

The Verdict: Trek at its campest and silliest, marred by excessive amounts of violence against women. It looks like this is trying to make some point about slavery and human bloodsports, but it's lost in all the daffiness. The final scene is incredibly corny.

The Mission: Investigate the impact of a Federation visit to a planet a hundred years ago.

Future History: This episode starts sketching in some of the future history that has been built on over the years to create the Trek universe we know now. The starship Horizon visited Iotia a hundred years prior to this episode (which would be roughly 2168, or what has now been established as seven years after the founding of the Federation and thirteen years after the end of Enterprise). At this time, the Federation of Planets had not established the non-interference directive (which fits with Enterprise) and did not have subspace communications (which does not). The message sent by the Horizon, before being lost with all hands, reporting their visit to the planet was therefore restricted to ordinary, light speed radio, so it's taken a century for it to reach Federation space. It's been suggested that the Horizon that visited Iotia was the ECS Horizon, a freighter featured in the series Enterprise.

Alien Life Forms: The Iotians are identical to humans, and are described as highly intelligent but also imitative (we don't get a great deal of evidence of the former). When the Horizon visited, the crew left behind some technical manuals and a book called Chicago Mobs of the Twenties (pub. 1992!), which the Iotians, for their own psychologically questionable reasons, decided to use as the blueprint for their entire culture. Now they're living in a prohibition-era styled society where mob bosses have replaced governments. Bela Oxmyx is the top boss, with Kracko as his biggest rival, and both of them want Kirk to fix them up some fancy heaters to take out the competition.

Captain James T: Gets into the swing of the mob culture very quickly. He invents a card game to confuse his captors, then bamboozles Spock by asking him to calculate the odds (nice little inversion of the cliche there). He enjoys the opportunity to drive an automobile, but he's very bad at it (the new movie would have us believe he's been driving cars since he was seven). His plan – to take over “the whole waxball” - is probably for the best, but surely he's got to get busted by the Federation for it? He looks great in Twenties gear, but...

Green-Blooded Hobgoblin: ... not as good as Spock, who looks sweet. Really, Nimoy should just have dressed like that all the time. Spock takes a lot longer to get into the Iotian way of talking than Kirk, but he takes to it with aplomb in the end. 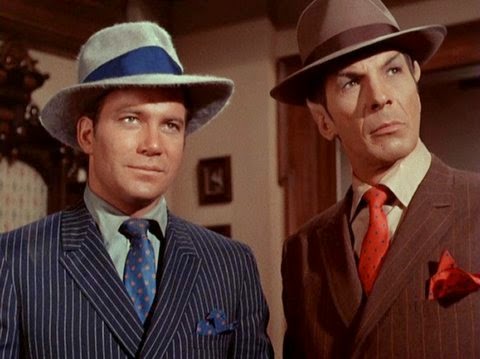 The Real McCoy: Says that landing on Iotia is like coming home. Really? You grew up in 20th century Chicago, did you Bones? He makes a good point about going down to the planet to “recontaminate” it. Kirk calls him Sawbones, for once, instead of just Bones. McCoy leaves his communicator down on the planet in the confusion, which could just start the whole society on another direction altogether.

Great Scott: Is bemused by Boss Oxmyx calling the ship, but he gets Kirk's nods easily enough.

Future Treknology: The transtator is found within all Federation technology, and is the basis of their advanced techniques. So leaving one down on Iotia is a big mistake. The Enterprise's phasers can be set to stun a whole group of people on a planet.

Space Bilge: Iotia is another planetary culture that seems to consist of nothing more than a single medium-sized city. Also, did the Horizon crew really not have anymore books? I'd love to see some more towns on Iotia where the natives have modelled their society on superhero comics, old western movies, pulp sci-fi magazines and oh god that's an idea for some fanfic right there.

Funny Bits: Kirk spinning out a bullshit cardgame called “Fizzbin” is makes for a genuinely funny scene, pulling nonsense like the rules of the game changing on Tuesdays and after dark. It's almost Pythonic; I half expect it to close with “and the winner is the player closest to the mantlepiece.” The Iotian crim holding has to be seriously thick to fall for the distrction, though.

Trivia facts: The Enterprise has a crew of four hundred.

Remastery: The original firefight included Batman-eqsue impact flashes from the phasers. These have sadly been removed in the remastered version.

Best line: “I think your behaviour is arrested.” “I ain't been arrested in my whole life!”

The Verdict: This is scarcely an episode of Star Trek, and kicks off a period when the series might as well have been a time travel show. In quick succession we'll get Planet of the Romans, Planet of the Cowboys and Planet of the Nazis. Nonetheless, “A Piece of the Action” is tremendously enjoyable, and Shatner in particular is both holding the whole thing together and having a fantastic time.
Posted by Daniel Tessier at 10:16