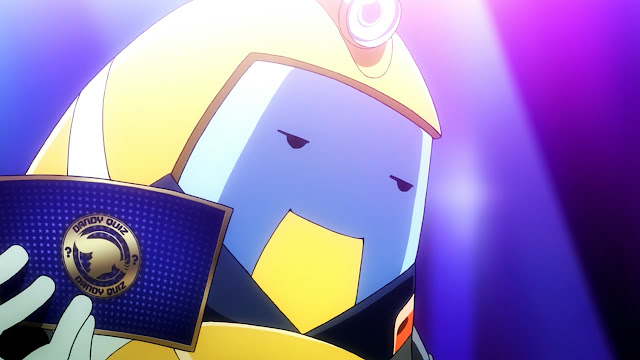 Oh my stars and garters, there's been so much on that I almost forgot to finish up with season one of Space Dandy, Here's the final two episodes, with season two to follow in the near-ish future.

Season One, Episode Twelve - Nobody Knows the Chameleon Alien, Baby

Dandy and co. attempt to capture a shapeshifting alien for a huge bounty.

He's Dandy, Baby: If he makes a 100 million woolongs, he plans to eat at BooBies three meals a day, and then live off the accrued BooBies points so he can eat there even more. He's not really bright enough to realise that a Chameleonian is not the same as a chameleon. In times of danger, his Dandy sense tingles. Dandy finds a huge-lipped female alien strangely attractive, which even Meow thinks is gross. He's not terribly good at catching aliens, and has only been bringing in worthless specimens. Eventually he gets himself banned from the Registration Centre for trying to catch Scarlet. Dandy is especially easy for the Chameleonian to imitate, because his thought processes are so predictable. Eventually, he becomes so unsure whether he is the real Dandy or not he suffers an existential crisis. His favourite sport is the ladies' hundred metre breaststroke.

He's Not a Space Cat, Baby: If he makes 100 million woolongs, Meow plans to just sit in the sun, drink beer and lick himself all day. He enjoys octopus popsicles.

He's Just a Little Obsolete, Baby: QT enjoys himself this episode, unexpectedly discovering the joys of fishing and becoming quite obsessed with it for a period. He spends so long fishing that the three of them forget what they were originally hunting for.

Chameleonian: Worth a wopping 100 (cha-)million woolongs at the Alien Registration Centre, the Chameleonian gets its name because it can change its appearance, although there the resemblance to chameleons ends. Although, presumably the sophisticated shapeshifter could turn into a chameleon, though. Nobody knows what they really look like, although the one we meet does take on an amorphous, blackish form between shapes. The Chameleonian is cunning and very hard to trap. It's brought onto the ship because it was disguised as a tsuchinoko and got caught by QT when fishing, which was a stroke of luck, really.

Rakendrian: Worth 32 woolongs. Looks kind of like a lipstick with an eye on it.

Unnamed alien: A flat creature that Dandy brings in only goes for a measly two woolongs.

Tsuchinoko: A legendary creature in Japanese folklore, a sort of fat serpent with ill-defined powers. Clearly the tsuchinoko exist in Dandy's universe, and live like fish on certain planets. QT is thrilled to catch a black one, but it is not what it seems.

The Scarlet Woman, Baby: Scarlet really has had enough of Dandy and his gang's incompetence in the alien catching business. She doesn't take kindly to being mistaken for a Chameleonian.

There's Bad Guys Too, Baby: Dr. Gel has completed work on the ultimate weapon, the Hyperdimensional Magic Hand, a system so sophisticated it can find its target anywhere in the universe of time and space. Unfortunately, it can't tell the real Dandy from the Chameleonian. Dr. Gel gets into a fight with this interloper, that ends with them both yelling "Who is the Doctor?!" at each other in a deliberate Doctor Who reference.

The Bottom Line, Baby: A good, fun episode, although the fishing aside goes on a bit too long. The quiz to determine the real Dandy, as well as being a riff on Who Wants to be a Millionaire ("Is that your final Dandy?) was done before, possibly better, in the Red Dwarf episode "Psirens," though. There are some nice Aliens nods in the episode too. 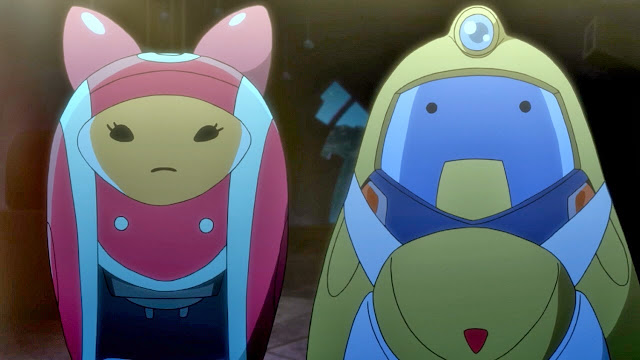 QT finally gets to be the focus of an episode when he falls in love with a coffee machine.

He's Just a Little Obsolete, Baby: He finds biological beings' emotions, especially love, confusing and wasteful, until he meets Maker. He falls for her beautiful, efficient coffee machine existence. He breaks her out of the Breakfast Club cafe to go exploring.

He's Dandy, Baby: To Dandy, flirting is like breathing. He thinks joining a cookery class will help him meet desperate housewives. It takes him about a week to notice that QT's missing.

He's Not a Space Cat, Baby: While Dandy is cruising for girls, Meow sticks with online dating. He's after two-dimensional women (Dandy could tell him about other-dimensional women, but we haven't reached that episode yet).

Robots Have Feelings Too, Baby: We meet many robots in this episode, including:

Maker is a feminine coffee-making robot who dreams of being able to see the world beyond her little coffee shop. Once she develops emotions of love she begins to malfunction and is sent to Dream Island, a huge rubbish tip where robots are left - known as "where appliances go to die." Sadly for QT, she is in love with Register.

Register is an intelligent cash register who falls in love with Maker, and with whom QT shares some understandable jealousy. Once on Dream Island, Register joins the Robot Revolution and rallies his followers as the DJ for robot raves.

Mill: a coffee mill that works in The Breakfast Club with Maker and Register. Probably Maker's best friend.

Toaster, aside from being a seeming reference to The Brave Little Toaster, is a beaten up robot who plans to head the Robot Revolution. To this end, he constructs a gigantic battle mech with which he fuses and goes in the rampage to destroy Deathroid City. This looks awfully like the robots from Laputa, Castle in the Sky. He is finally defeated by QT.

I Know This Planet, Baby: The Paradise Planet's main settlement is Deathroid City. It boasts beautiful, iridescent spires, surrounded by the far humbler downtown area where the plebs live, and Dream Island, which is actually based on a real garbage dump in Tokyo.

We're Alien Hunters, Baby: In an alien-lite episode, Dandy does have an encounter with what appears to be a beautiful blue woman who, in a frankly horrifying moment, splits open to reveal a blubbery male visage.

There's Bad Guys Too, Baby: Dr. Gel is in charge of the Hulkider device, a huge particle collider in space that is designed to reach the intense energies required to synthesise pyonium. He hates the name, but Admiral Perry thought of it so it's stuck. The Hulkider shorts out when Gel spills his coffee on the controls.

Phenomenology, Baby: The malfunctioning Hulkider releases a surge of pyonic energy that rockets to the planet's surface and hits QT, altering his atomic structure so that he grows to become large enough to battle Toaster. This is impossible, of course, and some may speculate that the energy known as love triggered this reaction.

The Bottom Line, Baby: A rather beautiful episode with some serious things to say about commodification of workers and questions just how we will react if we do one day develop artificial intelligence. A great end to the season.

To celebrate the end of season one, why not listen to some Space Dandy incidental music from Mountain Mocha Kilimanjaro? 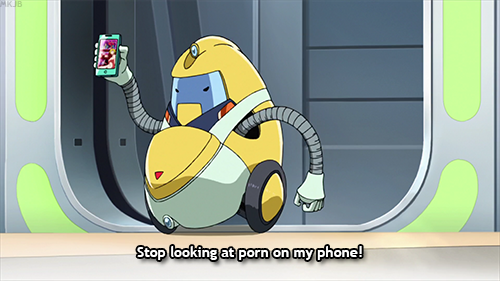