Ant-Man is a fun, exciting superhero flick, a solid instalment in Marvel's ongoing mega-franchise. While it's never going to set the box office alight like an Avengers film, it's a great experience – better than many would have expected it to be. Indeed, Ant-Man went from being a fascinating new production with real potential to seeming like a sure-fire bomb, simply by losing its original director. That question is going to hang over it forever, of course – just what would Edgar Wright's Ant-Man have been like?


Several critics have pointed out that Ant-Man, as it exists today, would have made more of a splash back in 2008, say, had it been made as Marvel's inaugural release instead of Iron Man. It shares a lot of DNA with that film, being a fairly straightforward origin story for a potential superhero who has a long way to go to learn to be heroic. This could have happened; Edgar Wright started work on the project way back in 2006, but his commitment to other productions, most significantly The World's End, kept him from working on it for long stretches. While Ant-Man sat on the back burner, both the eponymous hero and his partner the Wasp were kept out of Marvel's roster of films; indeed, Janet van Dyne was written into Joss Whedon's earliest scripts for The Avengers before being removed.


That said, there's no guarantee that Ant-Man would have been made a headlining hero back then. The Hank Pym version of the character, along with Janet's Wasp, were founding members of the Avengers in the comics. Now though, they look like the quaint sixties throwbacks that they are. Shrinking superheroes are a harder sell in the 21st century, when there's a temptation to be deathly serious about everything. It's for this reason that Edgar Wright, and his co-writer Joe Cornish, seemed like such a perfect fit for the project. Creators with a background in eccentric comedies and a demonstrated love of the absurdity of comics, they, if anyone, could find a way to make Ant-Man work. When Wright walked after eight years working, on and off, on the production, his cast almost walked with him. Quite what happened we still don't know, although by most accounts it sounds like Wright's vision was too different from the rest of Marvel's stable. 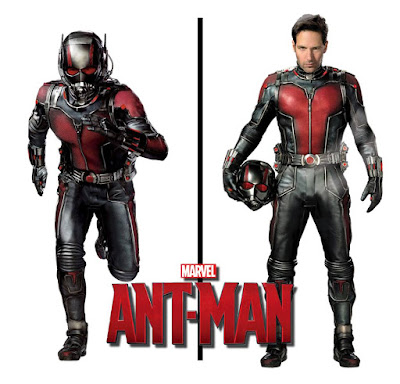 However, that seems a little hard to credit now. While Ant-Man has similarities in content to Iron Man, it's tone and style are distinctly different. The film it's most similar to is Guardians of the Galaxy, both due to its action-comedy style and its loveable crim leading man, but it doesn't really feel quite like any of the Marvel films so far. There's a warmth and real-world familiarity to the movie, amongst all the hyper-technology and ant wrangling. At its heart it's a story about family, about two men who are deeply flawed but will do anything to do right by their daughters, even if their understanding of what's right is skewed at times. Wright's version, I would imagine, would have leant further on the comedy, and have felt more like the aforementioned World's End than GotG. Ant-Man is full of comedic material, but it's not an out-and-out comedy. That's not to say it isn't funny; some scenes, particularly in the final act, are quite hilarious. However, the balance between pathos and humour isn't as deft as in Wright's work.


We'll never know, of course, unless an unexpected director's-remake arrives ten years down the line. Much of the original script is said to survive in the final version, reworked by Adam McKay and leading man Paul Rudd. Peyton Reed directs, and while he lacks the flourish of Wright, he does a fine job and handles some truly complex and spectacular sequences well, both for dramatic and comedic purposes. The effects are, as we have come to expect, excellent throughout; only the de-ageing effects during the opening flashback scene struggle to convince, and then only at certain angles. (This is a field in which effects have truly come forward, as evidenced also by the latest Terminator instalment.) The continual zapping of people and objects between sizes leads to some brilliant sequences, but it's the fight in the child's bedroom in the final act that really triumphs. It's here that the juxtaposition of action and comedy works best, with an effective guest role for Thomas the Tank Engine (Triple-T. E. to his fans).


Shrinking men have a long and illustrious history in genre works, but it's the Ant-Man's ability to control ants using special apparatus that is the hardest sell for the film. There's a suitably just-about-plausible explanation for it, but it's hard to swallow. Thankfully, the script accepts how utterly ridiculous the film's premise is, comments on it and moves on. Again, it's why a comedic approach works best; audiences would laugh at, not with, a straight telling. In spite of an attempt to make us root for one of the ants, who is christened Anthony, the critters are never made into characters in the piece, but they're more than tools. An army of chitinous pets with the best of training. Still, the movie does include the most heart-breaking ant-related moment since Honey, I Shrunk the Kids.


It's a far more focussed, contained affair than Marvel often give us. Their self-styled Phase Two has been all about cross-pollination, with no film standing on its own. While Ant-Man still has links to other films in the franchise, it's the most standalone story for some time, not including Guardians of the Galaxy. Aside from the post-credits scene and some cheeky nods to Spider-Man and the like, the appearance of Anthony Mackie as the Falcon is the only element that truly ties the film to its sister productions, and although it works well, it does seem quite forced in. Nonetheless, this is a far, far tighter production than the exhilarating but flabby Age of Ultron.


What also sets this apart from most of Marvel's films is that Scott Lang is an ordinary guy. OK, he's an exceptional safe-breaker, mechanic and electrical engineer, but he's still just a bloke who's made some mistakes and is trying to sort himself out. Paul Rudd may not be everyone's idea of leading man material but he's perfect for Lang, likeable but believable when it comes to the more heroic side of things. His feeble gang of friends provide suitable comic relief, particularly Michael Peña as the relentlessly positive Luis. Abby Ryder Fortson steals her scenes as Cassie, Lang's young daughter, and gets some of the funniest lines of the film. Michael Douglas is spot-on as Hank Pym, the first Ant-Man, now an old man with a life of regrets. Pym is not the most likeable of Marvel's characters, and making him into a secondary character rather than a lead was a wise move, especially as some of his more egregious character faults are still visible. Douglas manages to portray him both as dignified and a little pathetic. Standing out is Evangeline Lilly as Hope van Dyne, Pym's daughter and reluctant ally in the raid on the laboratory. She starts off as a hard, unlikeable character, but becomes immeasurably more vulnerable and open as the film progresses without losing any of her strength, resolve or toughness, and it's rare that we get to see that of a female character. She's still relegated to sidekick status here, but at least she'll be taking wing as the Wasp in a future film someday.


Ant-Man has a better villain than we've seen in a long time. Darren Cross is no Loki, but he has character and definition that has been sorely lacking in Marvel baddies of late. While he does have the basic supervillain qualifications – sociopathic tendencies and a desire for power – he also has character and motivation beyond that. Resentful of both Pym and Lang as the former's earliest protege, Cross's vindictive behaviour actually has some motivation behind it, however simplistic. He's also given life by a very charismatic Corey Stoll, who brings the villain to life in a way that Ultron, Ronan and Malekith never achieved. The only problem is that, once he dons the impressive Yellowjacket armour, he is rather swallowed up.

In its final act, Ant-Man takes a brief sidetrip that opens up possibilities for the future. Lang falls into the quantum realm (Microverse, Subatomica, whatever you want to call it), an element that I understand was added in the script reworks. Although brief, the sequence is spectacular, and leaves open the potential for other mysterious realms to be explored in future films, something that could work well for Thor or Dr. Strange. There are other directions for the character to take in the almost inevitable sequel, from taking the opposite direction and becoming Giant Man to bringing back Janet van Dyne from her quantum exile (the character being very obviously kept unrecognisable so as not to cause problems with future casting decisions). Maybe a bigger role for Judy Greer, playing an irritating mother in her second blockbuster of the year (after Jurassic World). Just so long as they can sneak an Archer quote in. At the end of the day, though, Ant-Man has potential to take his place as one of the Avengers. We shall have to see how his appearance in Civil War plays out. 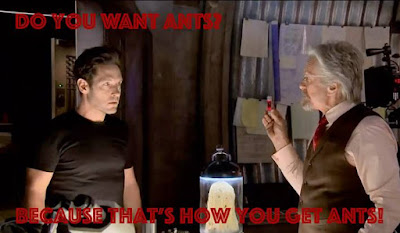