Today, after nine-and-a-half years travelling through space, the spacecraft New Horizons made its closest approach on its flyby of Pluto. The icy dwarf planet is currently over three billion miles from Earth. The image above shows the planetoid in high resolution at New Horizon's closest approach, while below is a composite of Pluto and its largest moon, Charon, to scale by size of body but not distance (in reality, the Earth could just about fit between the two). Armed with an array of spectrometers, radiometers and telescopic cameras, the spacecraft has been relaying data not only about Pluto-Charon, but also Jupiter and its moons, and the space dust that swarms through the Solar System. It's a relief considering how much can go wrong on such a long journey, especially considering the ship's main systems went offline in a hairy moment ten days before closest approach 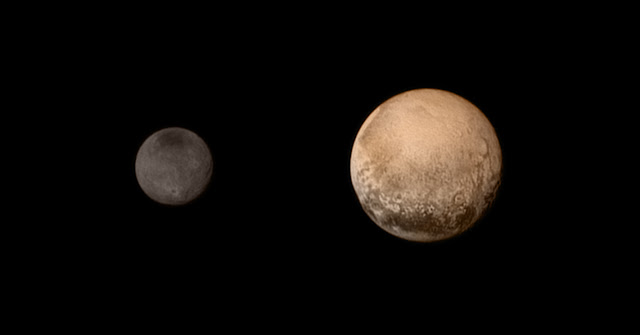 We've learned an enormous amount about Pluto, not all of it dry technical details that astronomers and physicists will spend years pouring over. Some facts just leap out. Pluto is a reddish colour, with a large, whitish patch in a rough heart-shape covering much of one hemisphere. It has a thin atmosphere which is losing gas, and this has previously distorted measurements of its size. Now that we can look closer, we can get an accurate measurement. Pluto has a diameter of 2370 km (+ or - 20 km), which means it is definitely larger than Eris after all (the diameter of Eris being a little less at 2336 km +/- 12 km). Which is a little ironic, considering that it was Eris' supposedly larger size that finally kicked off the (already simmering) debate concerning whether or not Pluto is a planet.

Now that we know it's a little larger than previously thought, this means it's also of a lower density than astronomers had concluded earlier, which in turn means it is icier than previously suspected. More ice: less rock = a less dense overall body. Much of this ice forms a polar cap on Pluto, previously unknown, which is comprised of frozen methane and nitrogen.

Charon, on the other hand, is a whitish-grey colour, and has no appreciable atmosphere. The diamater of Charon is 1208 km, which was already calculated but has now been confirmed. With nitrogen gas escaping the Plutonian atmosphere and detectable at distance of over six million km, Pluto and Charon may share an atmosphere, making them even more like a double-planet than already thought.

This is just the start of it; New Horizons is still sending back data and scientists will be analysing it for a long time yet. Meanwhile, New Horizons will continue on its journey, with NASA set to choose a new target for it to travel towards on its long journey out of the Solar System. You can read all about the mission here.