Strangeness in Space has just released Episode 2, which is now streamable here for free. Starring Trev & Simon and Sophie "Ace" Aldred, this episode also features Rufus Hound as Atrocious Knocious and Peter Guinness as the villainous Dr. Scarifium. There's also a guest appearance by Carol Cleveland. It's very silly, and did I mention it's free? 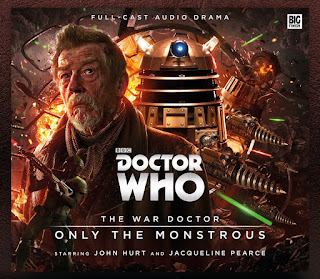 Big Finish has been secretly recording a special new box set starring John Hurt! We always wondered if they might get there eventually, and now BF have broached the Time War, starting with The War Doctor: Only the Monstrous. Clearly that title refers to Nicholas Briggs, who has no regard for the dwindling of our bank balances. The press release goes on to say that there will be three further box sets for the War Doctor, followed by a prequel release featuring Paul McGann's eighth Doctor at the beginnings of the Time War. All the sets are available for £20 on pre-order for both CD and download. As well as this, McGann stars in this month's big release, the first set in the Doom Coalition series, which is set to crossover with BF's new River Song series. So bye-bye pocket money. (The order of events right now seems to be To the Death [previously on Radio 4X], Dark Eyes 1-4, Doom Coalition 1-4 [with a River Song instalment too], The Eighth Doctor: The Time War, The Night of the Doctor [the webcast mini-ep], The War Doctor: Only the Monstrous.)

Before all that, though, there's a chance to listen to some classic science fiction on Radio 4X. Walter M. Miller, Jr.'s 1960 novel A Canticle For Leibowitz has been adapted for radio in this excellent reading by Nigel Lindsay, who explores this devastated future through the eyes of a Catholic monk. The first book in the novel, Fiat Homo, is now available to download or stream in five episodes. It's really quite something.