Lack of funds and a sincere disinterest at the Secret Wars event have meant I haven't been keeping up with Marvel of late, but I'm now trying to catch up on some of the titles that actually look like fun. With that in mind, I picked up two trades from the bibiliotheque: Believe It, volume one of The Unbelievable Gwenpool, and The Smartest There Is, third volume of Moon Girl and Devil Dinosaur.

Moon Girl is a gorgeous little title, and I picked up the first few issues when it started. This book collects issues #13-18. Gwenpool wasn't something I was particularly interested in originally, thinking it too gimmicky, but I'd heard some good things so picked that up as well. Believe It is a chunkier volume than the other, collecting issues #0-4 of the title series (issue zero itself being a combination reprint of a Howard the Duck back-up strip and a Christmas one-shot). Both collections go down a similar route, pairing their respective heroines with a succession of established Marvel characters. It's a tried-and-tested approach to new characters, making them part of the ongoing story and more appealing to existing fans. And, you know, it works, so fair enough. 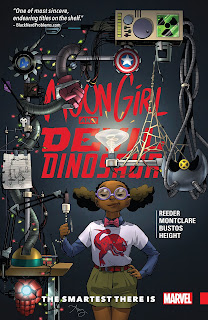 Moon Girl - not to be confused with EC's Moon Girl - is the hero name of Lunella Lafayette, a young girl who, it is here confirmed, is the smartest person on Marvel's Earth. She is accompanied through much of the story here by Amadeus Cho, aka the Totally Awesome Hulk, who is not a character I'm particularly keen on, but it's good of him to help her out, even though he's only the eighth smartest person in the world. It's a nice little storyline, exploring the old conflict that arises when intelligence it confused with wisdom. Lunella may be a super-genius, but she's still only a little girl, and has a lot to learn. It also bears repeating that it is still hugely important that Marvel are running a title that stars a black child whose main power is her intellect. Although she does also have Inhuman DNA and a psychic connection with a time-displaced Tyrannosaurus, so it's not the only string to her bow. While you know that Lunella needs direction from her elders, it's hard not to feel for her when she feels frustrated or constrained, or, as at school, bored out of her mind by having to go at the slow pace of others. There's some fine character writing there by Amy Reeder and Brandon Montclare. As well as the new Hulk, Lunella meets with the Thing, Ironheart, Ms. Marvel, Dr. Strange and a bunch of X-Men, and learns some lessons on trust and teamwork. It's a simple but strong story, and I enjoyed it. 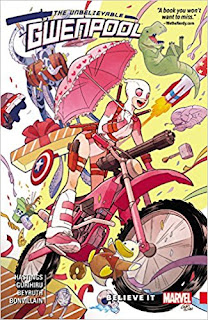 Gwenpool, who's real name is, in fact, Gwen Poole, started off as a covers gimmick when everyone went mad for Spider-Gwen. Marvel put Gwen Stacy versions of various characters on covers across several titles, and Deadpool cover was popular. It's easy to see why - Gwenpool is cute and dangerous-looking and you can see her legs. Making a character out of this might have proven difficult, but writer Chris Hastings made a good job of it. Rather than making her yet another parallel version of Gwen Stacy, he made Gwen Poole a refugee from our own universe, somehow lost in the reality of the Marvel comics she reads. She's essentially a variation on the idea of Deadpool's fourth-wall-breaking, but in her case it's because she's fully aware of the comics themselves.

This might be good for nothing more than a bunch of in-jokes, but it actually makes Gwen a potentially dangerous character since she knows more about various characters than anyone else. Even though she has no actual powers, she knows everyone's backstory and weaknesses. Convinced she has to be the hero of her own title, she kits up in pink leather and becomes a vigilante. It all goes wrong, of course, and she finds herself well out of her depth and coerced into working for MODOK (who, amusingly, thinks he's the smartest there is). As well as her own, rather more effective, session with Dr. Strange, Gwen hangs out with Howard the Duck, works with Batroc the Leaper and gets her ass handed to her by the lady Thor. It's a narrow thing, but it stays the right side of too knowing anf=d tongue-in-cheek. Good stuff.