FANS WHO: I Can See You

Waaaay back in 1997, when Doctor Who was seemingly dead onscreen, a group of fans under the name TNT Films made their own serial. The 90s were the golden age of Doctor Who fan productions, and by '97 looked like the only way forward for Who onscreen. Fans wanted as much Doctor Who as they could get their hands on, and a lot of amateurish rubbish got more attention than it deserved. So it was especially exciting when someone made something that was genuinely good. The Millennium Trap was one such production, a fun and well-made adventure that evoked both the Troughton and Pertwee eras and brought Nick Scovell to attention as the fan Doctor to follow. 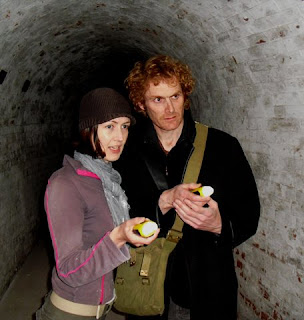 At the end of The Millennium Trap, Scovell's Doctor regenerated, transforming into the young James Harper. After that, though, we didn't see what happened to the new Doctor. Scovell returned in several stage productions and eventually another filmed serial (and in the last stageplay, regenerated again - into Nicholas Briggs!) but we never got a chance to see what followed from Trap. Then, some years ago, TNT Films unexpectedly announced that James Harper would star in a follow-up, titled Doctor Who: I Can See You. After some production stills and info were released and there was some strong fan interest, it all went quiet.

Finally, in 2018, I Can See You is now complete and available. So was is worth the wait? 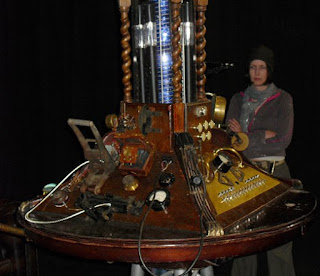 Well, the first thing to say is that this is a much simpler affair than the story it sequalises. A short story rather than a novel. It's also a pretty cheap affair (although not so cheerful); aside from the lovely TARDIS set, it's filmed in public spaces and a charity shop, before eventually ending up in a featureless void. However, the appeal of Doctor Who, let alone fanfilms, has never been in huge budgets or flashy effects. I Can See You feels like Doctor Who, combining a tight script with some decent direction (by Rob Hamilton and Andy Robb respectively) to give us a straightforward but effective adventure. The cast is small, led by Harper himself and Mary Stone, as his homeless companion JoJo. On the run from an alien force, JoJo is a character who wouldn't be out of place in the modern TV series. Initially disregarded by the Doctor, she becomes part of his life by sheer force of will. It's a memorable performance by Stone, and it's a pity we likely won't see more adventures from these two leads.

This is Doctor Who, though, and what everyone is really wondering is, what's the Doctor like?

James Harper makes an excellent Doctor. He's quite different to his predecessor (any chance of a Scovell-Harper remake of The Two Doctors?) Initially, he's acerbic and dismissive, having no time for anyone, even someone in mortal danger. There's clearly something weighing down on him, something that has taken its toll on his spirit. We get a little insight into what's bothering him, but ultimately it remains mysterious. In time, though, the thrill of the chase and the impact of JoJo reawaken his adventurous spirit. There's a very Doctorish quality to Harper, and visually at least, he has a little of both Tennant and Capaldi to him.

Short but sweet, I Can See You is a great little adventure for an engaging Doctor-companion team. It's a treat to finally get to see it.


I Can See You can be viewed on the team's Facebook page.
The next Fans Who review will be The Wooden Planet from CP Studios.

Email ThisBlogThis!Share to TwitterShare to FacebookShare to Pinterest
Labels: Doctor Who, fanfilms, reviews