TREK REVIEW: Discovery 1-10 - "Despite Yourself"

Star Trek: Discovery returns from its mid-season break to begin chapter two, which looks set to be the saga of the Mirror Universe. It's a bit of a wrench sideways for a series that has so far been almost wholly concerned with the war with the Klingons. The big revelation that the ship has been stranded in the Mirror Universe is actually no surprise whatsoever - it was pretty well signposted that they'd travelled between universes and there have been several hints along the way - but it's still exciting to back in Star Trek's favourite parallel continuum.

The Mirror Universe is an extended joke that can wear thin quickly, but for now, this is tremendous fun. We've just about gotten to know the characters well enough to make hearing about their nasty parallel counterparts fascinating. One fan theory has held that Lorca is actually from the Mirror Universe anyway, but unless he's a very good actor he's just as shocked to be in another universe as the rest of the bridge crew. It'll be interesting to explore whether Mirror Lorca is truly a freedom fighter or whether he wants to take the Empire for himself.

I'm not so enamoured with Burnham this episode, impressive though she is in the combat scenes, but that's mainly due to the other characters getting the bulk of the quality scenes. Anthony Rapp manages to continue to impress as Stamets, even though he spends much of the episode unconscious and/or delirious. It's going to be a very upsetting scene when he fully regains consciousness and discovers his partner Culber has paid the price of trusting Tyler. That was a genuine shock, as even though Culber was never the most significant character and potentially a bit disposable, he was so inoffensive that it was a surprise to see him bite it so suddenly.

So, the big mystery of Ash Tyler turns out to be... exactly what we thought it was. Although L'Rell never comes out and says, "Yeah, your name's Voq and you're an undercover Klingon agent," it's basically been confirmed. In a way, I think it's a pity, since it's the most obvious explanation, and also lessens the impact of Tyler's PTSD storyline. A major storyline dealing with wartime abuse is to be praised, and to reveal it's all warped/implanted memories cheapens that. Nonetheless, Shazad Latif is absolutely excellent throughout the episode, really selling the anguish and confusion of Voq/Tyler.

The episode really belongs to Mary Wiseman as Tilly, though. It's a massive, and questionable, cliche, that evil fascistic women must be sexified, but wow, Tilly in this episode! The most likeable character in the series gets to play against type as the evil "Captain Killy," the most vicious woman to ever fight her way to the captaincy of a ship. The idea that the crew could redecorate the entire ship, repaint the hull, recarpet the bloody place and synthesise new uniforms in about a day is pretty hard-to-swallow, but when worth it when it allows us the entertainment value of Tilly ad-libbing her way out of a confrontation with an imperial starship. 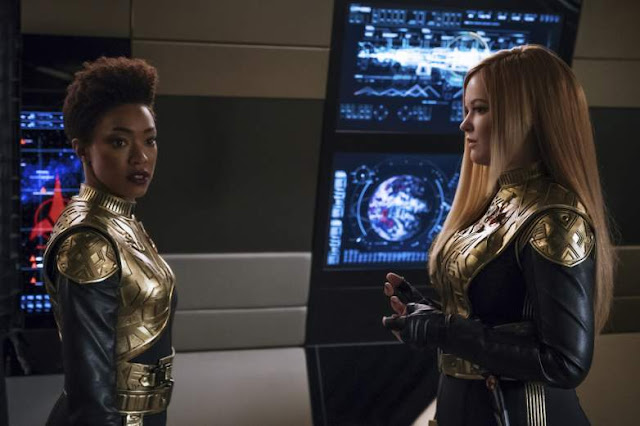 Just tons of continuity in this episode, from the Shenzou turning up as an imperial ship,to the Organian System, to the references to the Enterprise two-parter "In a Mirror, Darkly," and the fate of the starship Defiant. It sits on just the right side of intense fanwank, and adds something to the episode. It's a real fan-pleaser.

I think I'll carry on reviewing episodes until the season ends, if only to track how the series develops and how wide off the mark I am in my predictions. The new mystery is the identity of the "faceless emperor." Almost undoubtedly this is the Mirror Universe version of a character we already know. The smart money's on Georgiou, what with Michelle Yeoh being the biggest star in Discovery's arsenal and still involved heavily in the promo circuit - plus Burnham being a favourite of the emperor. 10-1 it's Harry Mudd, though. That would be a laugh.
Posted by Daniel Tessier at 21:46