So, this one has gotten a bad press, and to be fair, I can see why. It's a bit of a mess, narratively speaking, and the shoehorned in link to Cloverfield, while it no doubt helped get the thing made, works really poorly. Nonetheless, I enjoyed the film. It's a schlocky sci-fi horror in the vein of Event Horizon, with a dash of Alien, a touch of Gravity, and plenty of derivative but mostly effective nonsense. Spoilers follow.

The Cloverfield Paradox started life as The God Particle, a spec script by Oren Uziel, until it was picked up by J.J. Abrams, who rewrote it to become part of his Cloverfield mythos. The original Cloverfield, which came out way back in 2008, was good fun and a new take on the Daikaiju genre, before the fake found footage style had become overused and stale. This was followed up, unexpectedly, by 10 Cloverfield Lane in 2016, which I haven't seen but is reportedly another movie which was rewritten to tie into the Cloverfield universe. The God Particle focused on a particle accelerator experiment that still forms the core of the finished movie. (Presumably it was somehow about the Higgs boson, and there's a line about that fundamental particle in the finished script, that doesn't really tie into anything.)

The finished film is set in 2028, when an major energy crisis has put the world on the brink of all-out war. Germany and Russia, in particular, are at each other's throats, but seemingly the whole of Europe is a tinderbox. To find a new source of perpetually renewable energy, Space Station Cloverfield has been set up in Earth orbit, to begin experiments with a gigantic particle accelerator which will potentially unlock infinite energies from space/time. The search for energy combined with unknown perils is common enough in sci-fi now that it's almost become a subgenre in itself. The space station is the modern day haunted house, or in Doctor Who terms, an isolated base under siege. Tensions are high among the international crew after two years locked up together without results, and then, finally, the accelerator works and produces a stream of powerful energy. Unfortunately, it runs out of control, damaging the station and knocking everyone for six. When they recover, there's no sign of the Earth.

It takes these top tier scientists a long time to realise that they've moved along Earth's orbit and that their view is being blocked by the sun, and longer still to realise that they've actually passed into a parallel universe. Increasingly bizarre horror situations occur for under-explained reasons. It mashes together a number of sci-fi ideas that don't work terribly well together logistically. In fact, none of the plot really makes much sense, so I can entirely understand why some commentators had such a hard time with it.

On the other hand, I think they made the mistake of taking it too seriously. While it sets itself up a scientific drama, it very rapidly becomes clear that this is anything but, and it's best watched as the melodramatic nonsense it is. There's a lack of tonal consistency, but this can work if taken far enough, and it just about does here, with outright horror mixing with earnest futurism, conspiracy theorism mixing with heartfelt family speeches and extreme danger mixing with bizarre moments of humour. Again, the Doctor Who comparison works: just like DW, the film throws together a bunch of ideas and genres and sees what it can get away with. The best moments are the most out-there: the shifty Russian guy goes crazy and then explodes into a shower of worms; Chris O'Dowd's laconic engineer gets his arm bitten off by a wall, only for it to crawl back to him and write him a note. (“My arm saved us!”) Neither of these events is met with any real explanation, other than that having two dimensions in contact produces weird results. 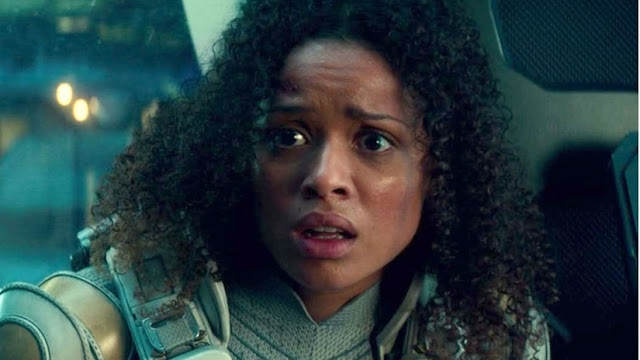 So, it's nonsense, but creepy, entertaining nonsense. It wouldn't work nearly as well if it weren't for a really excellent cast. Gugu Mbatha-Raw is the star of the ensemble, as believable and likeable as ever as Hamilton, a woman who has lost her children and so endures separation from her husband, using her mission as a way to cope and atone for her sense of responsibility for the tragedy. She's an excellent lead and holds the film together, but the whole cast are pretty great here. Daniel Bruhl plays the German physicist Schmidt, who is the target of some conspiracy theorising himself, which turns out to be true in one universe but not the other. David Oyelowo is the rugged station commander, Kiel, the beautiful Zhang Ziyi is Tam, the Chinese chief physicist (who speaks only in Mandarin throughout). Completing the crew are Aksel Hennie as Russian engineer Volkov, John Ortiz as Monk, the medic, and the aforementioned Chris O'Dowd as Mundy, although I still see him as Roy from The IT Crowd. One of the nest turns comes from Elizabeth Debicki, who plays Jensen, the chief physicist of the other reality, who is discovered almost fused with the station itself after it materialised in place of its counterpart. She acts as a rational but dangerously unknowable element throughout.

A weaker element of the script is that it continues to jump back to events on Earth, as Hamilton's husband (played well by Roger Davies) learns of the station's disappearance while trying to deal with catastrophe all around him. To begin with this works with the narrative, as we're not always sure which reality we're following, but once it's clear that the wartorn Europe seen on news reports is Jensen's home, it's clear that something stranger is happening in the primary reality. Helpfully, some nutcase has already appeared on TV earlier in the film, spouting his own conspiracy theories about how the experiment will tear open the universe and unleash demons into the past, present and future. It's a terribly hackneyed piece of exposition that robs the eventual reveal of any mystery.

I mean, we know it's linked to Cloverfield so we expect the final reveal that the great big monster from that film (or another great big monster rather like it, the timing is askew here and the two films don't even necessarily occur in the same reality). The script is never sure whether it's meant to play this as a surprise or ass an origin story, and it falls between the two stools. The link to Cloverfield is the weakest element in a confused production, but there's still a lot of fun to be had with this silly film, as long as you don't take it too seriously.