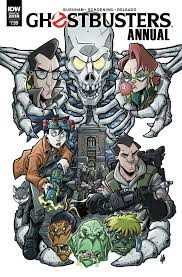 I can't quite explain the childlike joy I feel when cracking open a Ghostbusters annual. A regular feature of my nineties Christmases, the tradition was resurrected in 2015 by IDW as a sideline to their ongoing Ghostbusters comic series. The 2015 and 2017 annuals (there wasn't a 2016 one, so it's not exactly annual) contained a mix of strips and stories, this year's release features a single, bumper length story that bridges the gap between Ghostbusters 101 and the upcoming multiverse crossover event Crossing Over. While it acts as a teaser for the latter, it makes for a nice little story in itself, in which the 'busters encounter the IDW universe version of Samhain, the pumpkin-headed spirit of Hallowe'en.

The script has some nice little snaps at the original RGB episode "When Hallowe'en Was Forever," like pointing out that Samhain isn't pronounced how it's spelled and that it really doesn't make sense for an ancient Irish spirit to have a pumpkin for a head when the things come from the Americas. But Erik Burnham knows that the episode is a fan favourite for a reason, and this is nothing more or less than a chance to see the core Ghostbusters battle one of the animated series' most memorable foes. I love the new semi-skeletal design for Samhain, and Shoening and Delgado once more form a fantastic artistic team peppering their story with fun little nods to the franchise. Finally, in order to defeat Samhain and a huge army of ghosts, Egon does the unfathomable and brings in 'busters from every universe possible. It's simply tremendous fun, and ends with a nice little teaser for Crossing Over, which promises to be ridiculous.
Posted by Daniel Tessier at 21:30