Who Novelisation Quest 12: "Twice Upon a Time" by Paul Cornell

With the release of the first new Target novelisations in decades, it seemed a good opportunity to follow up my old Who Novel Quest with a new run through the novelisations - one for each Doctor (excluding the War Doctor). For no particular reason, I'll run through them in reverse. Why not? Timey-wimey, or something. 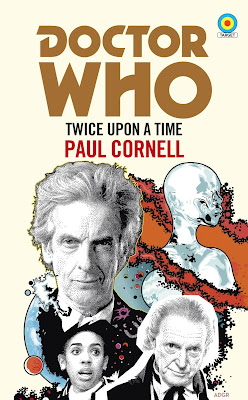 The final release of the Target line – for now – is the most up-to-date it could be, with Paul Cornell novelising the 2017 Christmas special, right up to the first, and so far only, appearance of the thirteenth Doctor. Unlike Rose or The Day of the Doctor, Twice Upon a Time isn't covered by the scriptwriter, but by one of the most celebrated authors of the novel line. Cornell shot to Who stardom with the early New Adventure Timewyrm: Revelation back in 1991, being one of the first writers who really looked into what made the Doctor tick. It makes sense then that Cornell takes on this introspective regeneration story.

Twice Upon a Time doesn't spend as much time in the Doctor's head as The Day of the Doctor, but it does look at the Doctor's perspective on his upcoming regeneration - both of them. I'm absolutely convinced that the twelfth Doctor's reluctance to regenerate is completely within character, but the novelisation goes into more depth, adding an element I hadn't considered. The Doctor has now lived what he considers a normal, human life: years spent with his wife, followed by a long retirement as lecturer at a university. Decades longer than a human life, of course, and interspersed with trips through time and space, but still, the closest thing to normality he has ever really experienced. Added to which is the Doctor's defence that he is, after thousands (arguably billions) of years, just tired. This is a man who is ready to let go. From the first Doctor's perspective, the fear of the unknown is more apparent as his reason, having held onto his original body for too long and in dire need of a regeneration (although I'm pleased to see Cornell note that it isn't simply old age, but the energy drain of the Cybermen that finally does him in). A nice touch is that the first Doctor almost accepts the need to regenerate, until seeing his future as “the Doctor of War” puts him off.

It's quite right that the cover of the novelisation depicts David Bradley as the first Doctor, given his wonderful guest role in the special. However, reading the story in prose form provides the opportunity to imagine the adventure featuring the Doctor as portrayed by William Hartnell. The twelfth Doctor is even more bemused by his first incarnation's behaviour in the book, rightly noting that he is behaving rather out of character. He even wonders if he is showing off in front of the Captain, which would be quite in character for the first Doctor. Still, being able to imagine the story as featuring the original Doctor does add a little something, even if it does cause it to slip into black and white in my head from time to time. The one significant element missing from the TV version was Susan, so I'm pleased that the first Doctor comments on how much he misses her. There's even a nice allusion to their reunion in The Five Doctors, something that is normally skated over.

Bill's story is much expanded, which adds an extra dimension to a story that otherwise focuses heavily on the Doctor. We learn a great deal more about her life with Heather, one that saw them settle on Earth surprisingly quickly, in what might be seen as a parallel to the Doctor's longing for an ordinary life. More of the story is told from her perspective, and from the Captain's, than we might expect given the focus on the Doctor on TV. We also get some welcome expansion on the fates of certain characters, from Nardole to Rusty the Dalek, although Clara's ultimate fate remains mysterious.

Most of all, the twelfth Doctor's acceptance of his regeneration is more fluid here, coming over less as a story obligation than in the broadcast version. While Twice Upon a Time doesn't play with the story like The Day of the Doctor, or explore the Doctor in the same depth as Cornell's best works, it does exactly what a novelisation should do, which is to bring depth to a story that leaves it stronger and more satisfying than it had a chance to be on the screen.

Data:
First published by BBC Books (Target imprint) in 2018
Based on "Twice Upon a Time," first broadcast in 2017
Audiobook read by Mark Gatiss
Posted by Daniel Tessier at 13:06