Who Novelisation Quest 11: "The Day of the Doctor" by Steven Moffat 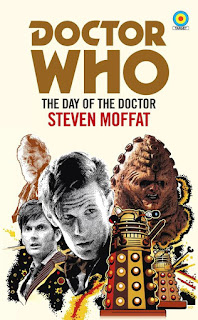 Perhaps the most anticipated of the new Target releases, The Day of the Doctor is the first novel by Steven Moffat, surprisingly for a writer who has become so prolific. Although initially asked to novelise Twice Upon a Time, Moffat instead decided that this was the one he absolutely had to write, especially considering the dreadful time he had writing the actual episode. I get the impression that this revisitation was a much more enjoyable experience for him.

If you don't care for Moffat's approach to storytelling, then you won't much like The Day of the Doctor. This is timey-wimey throughout, one of the more complex tellings in the Doctor Who line, certainly the most complex of the novelisations, jumping back and forth in time and between different characters' viewpoints. Well, that's at first glance, but the vast majority of the book is told from the Doctor's perspective, in one of his many incarnations, each chapter being delivered as a separate document by an omniscient narrator with a unique perspective on the overall story. Three guesses as to who that is. There's a chapter that's told from a human perspective, until you realise actually, it's a Zygon, but otherwise this is the Doctor's story through and through. And rightly so, because no other story in the TV series' history has ever been as much about the Doctor's own experiences and his views on his very long, eventful life.

The episode leapt about quite a lot, but the book is even more jumpy, and is presented in an order that never quite makes a logical progression clear. It opens with Chapter Eight, which adapts "The Night of the Doctor," the eighth Doctor's last minutes of life, before continuing with Chapter Eleven, the opening to the actual anniversary episode with Clara and the eleventh Doctor. Focusing on the numbering will lead you astray, though, and it's nothing as simple as chapter = Doctor, although the fact that Chapter Nine is redacted in a pretty funny decision, surely a snub to Christopher Eccleston for declining to appear in the episode. In fact, he's in this even less than the actual broadcast, since one of the very few elements not expanded upon is the War Doctor's regeneration, which is sadly relegated to occurring off-screen.

The broadcast episode was primarily the eleventh Doctor's story, given that Matt Smith was the incumbent star at the time, but Moffat has said that he views this version more as the War Doctor's story. In practice, however, so much more prominence is given to the Elizabeth/Zygon storyline that in effect it becomes the tenth Doctor's story for much of its telling. Things are particularly complicated (but ingeniously told) when all three Doctors are locked away together, with the tenth Doctor sandwiched between his suppressed past and his unwelcome future. Cleverly, Moffat doesn't resort to referring to the Doctors by number, but drops in little descriptors instead, which can be entertaining, albeit a little confusing, when the viewpoint is switching between incarnations. Given that this is original author reworking his own material, the dialogue is surprisingly altered, but what author can resist tinkering with their own work even after it's ostensibly finished?

As with Davies and Rose, Moffat takes the opportunity to expand the story in various ways. Satisfyingly, we find out just why and how the tenth Doctor made his way into Elizabeth's affections, cementing the feeling that the other Doctors barged their way in part way through another adventure. There are a number of extra elements inserted; River Song turns up, perhaps not surprisingly, in a bit of backstory; the twelfth Doctor is made more important to the heavily revised climax; and the thirteenth Doctor makes an appearance. The grand "all thirteen!" finale is very different, but perhaps even more satisfying, with Moffat realising that what works as a surprise and a visual treat onscreen won't work the same way in prose five years later.

The Day of the Doctor is one of the most enjoyable Doctor Who novels I've read, and believe me, I've read a lot. It stands up as one of the very best of the novelisations and makes me hope that someday Moffat will turn his hand to novel writing again.

Some fun observations from the novel:

The Doctor's first two incarnations were apparently colourblind, something the Doctor didn't realise until the Time Lords corrected this with his second regeneration. So, all that time we were watching the episodes as the Doctor would have seen them.

Moffat reinstates something he was dying to include in the broadcast episode, but couldn't due to rights issues: the Doctor Who movies starring Peter Cushing exist in-universe as depictions of the "real" Doctor's life. He isn't the first author to suggest this, but he runs with it farther than others, even having the tenth and eleventh Doctors take time out from the proceedings to watch both films and then go back in time to fetch Cushing so he can make another one. It's a pretty hilarious way to explain how he can turn up in a new Star Wars film years after his death...

The potion given to the eighth Doctor by Ohila was just "lemonade and dry ice." So it's true the Doctor was just using this transformation as a way to excuse his behaviour during the War. (I'm still convinced he was cured of his half-human DNA during this regeneration though.) He also mentions Fitz during his companion rundown, fittingly given this is now a prose story.

The War Doctor half recognises Clara from her voice, referencing the later episode "Listen" which had her speak to his childhood self.

Coal Hill headmaster Mr. Armitage is completely in on the Doctor's existence, having been tipped off by governor Ian Chesterton.

Data:
First published by BBC Books (Target imprint) in 2018
Based on "The Day of the Doctor," first broadcast in 2013
Audiobook read by Nicholas Briggs
Posted by Daniel Tessier at 22:20