At the edge of space 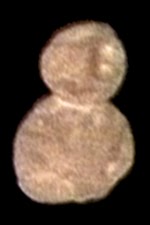 It's been a fascinating couple of weeks out at the furthest reaches of the solar system.

On New Years Day, the spacecraft New Horizons achieved flyby of the distant planetoid Ultima Thule (2014 MU69). You will recall that back in the summer of 2015, New Horizons made the most distant planetary flyby in history when it reached Pluto, taking shots in unprecedented detail. It's spent the last three-and-a-half years travelling ever outward, finally making it to Ultima Thule at a distance of 43 AU, or six light hours. The orbits of the two planetoids cross, and they are favourably positioned to one another during the spacecraft's window of opportunity.

Ultima Thule is a funny little planetoid. It's snowman-shaped, formed when two objects fused in a slow collision billions of years ago. It's nickname refers to a Latin phrase which became the name of the legendary northernmost point of the ancient world. NASA have also named the original planetesimals that came together Ultima and Thule (for the larger and smaller respectively) which is cute. Ultima Thule is only 31 km long at its greatest extent, and is a snapshot of the initial building blocks of the solar system, that came together to form larger planetoids and planets. NASA are now studying the data sent back for information on its composition, surface temperature and geology, and any evidence for rings, moonlets or a cometary coma.

The next destination for New Horizons remains to be seen, but it has power enough to remain operational until around 2030 and should be able to complete a final planetary flyby once a suitable, very distant target has been identified. 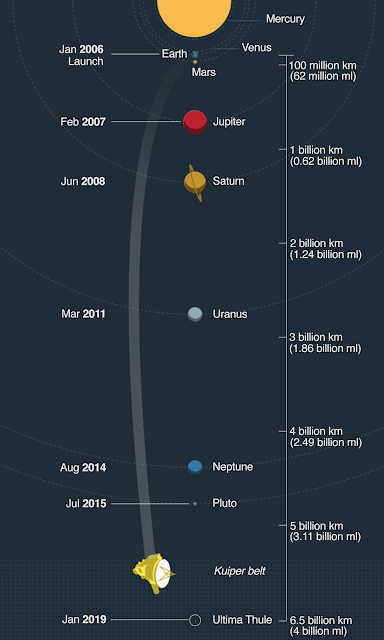 New Horizons is the fastest travelling spacecraft (in terms of initial speed) in NASA history, and is even catching up with the earliest space probes that were launched in the 1970s. Voyager 2 left the heliopause, officially entering interstellar space, in November (it's brother Voyager 1, although launched a little later, passed it and reached the threshold earlier). The Voyagers were be joined in interstellar space by New Horizons in the next few decades, as well as the now defunct Pioneer probes. NH will eventually pass the Pioneers (by the 23rd century, which is when Pioneer 10 is due to be destroyed by the Klingons), but will never catch up with the Voyagers.

Also in November, three astronomers (Sheppard, Tholen and Trujillo) observed the most distant trans-Neptunian planetary object ever. Officially designated 2018 VG18, but nicknamed Farout, the object is the first to be detected at a distance of over 100 AU. Currently at a distance of 120 AU, it beats Eris at an observed distance of 96 AU. In terms of average distance though, it is more than double that of Eris, although not nearly the farthest discovered. In 2014, the same team discovered FE72 which has a semi-major axis of a wahopping 1550 AU.

It's a fascinating time to be learning about the very fringes of our solar system.