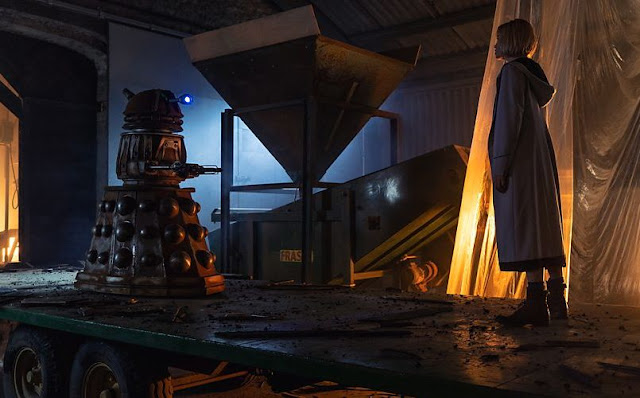 Without getting too far into the implications or thought processes behind ditching a highly sought after Christmas Day slot, it was strange not to have an episode of Doctor Who to look forward to on the big day, for the first time in thirteen years. However, it was great to have a new episode to look forward to on New Year's Day, when we had been slobbing around for the entire day, waiting for the takeaways to reopen because we missed lunchtime and filling time by watching Disney cartoons. Looking at the overnights, it looks like "Resolution" did very poorly, dropping below episode ten's fairly low initial ratings, but it was still fourth most watched for the day. It looks like New Year's Day is a terrible day to be scheduling event television these days, which might also suggest moving away from Christmas was a foolish idea.

All that aside, "Resolution" (a title that works on several levels, although "Resolution of the Daleks" would have better warmed my fan heart) was a very entertaining episode, providing the big stakes, high spectacle finale that series eleven really needed. Keeping the Daleks - or rather, Dalek - back for the special was a sensible move, although I'm in two minds about whether it was a good idea to keep mum about its inclusion for so long. I'm put in mind of John Nathan-Turner's turning down of a Radio Times cover for Earthshock in 1982, so as to better keep the surprise of the Cybermen returning. Top marks for maintaining the surprise, but less successful in generating viewer interest.

Nonetheless, the episode worked. There are plenty of viewers who think the Daleks are becoming tired and overused, and it's hard to argue with that. We've had an appearance by them almost every year since the series returned in 2005, whether it was a two-part Dalek extravaganza or an extended cameo. They've very nearly been done to death, and so the initial announcement that series eleven wouldn't feature any old monsters (still technically true) didn't bother me. On the other hand, if there's one monster that every Doctor really has to face, it's the Daleks. There's a sense that a Doctor doesn't really count until he/she faces them. Of the eleven previous main Doctors (ie starring in an ongoing series on TV), eight had a Dalek story in their first season. McCoy only had to wait till his second, Pertwee and Davison hung on till their third. The various eighth Doctor media wasted little time in pitting him against the pepperpots, and the War Doctor was defined by his enmity with them. The Doctor exists in opposition to the Daleks, even if there have been long stretches when they haven't appeared.

So they had to come back at some point, and bringing them back for the special/finale was a good move. It was also a very good decision to feature a single, lone Dalek, to once again show the that they could be a genuine, frightening threat. This is the exact tactic used by Eccleston's 2005 episode "Dalek," the episode to which "Resolution" is most clearly indebted (and to significantly less effect by Capaldi 2014 episode "Into the Dalek"). Daleks, like most villainous hordes, suffer from the Law of Conservation of Ninjutsu - there's only a finite amount of badassery allowed onscreen, so that one Dalek can kill a planet but a thousand of them can be mown down by human resistance or Cybermen.

In most respects, the Dalek scout - a new variation created to have extra-awesome abilities for this one episode - is successful in making the Daleks a threat again. At first, crawling around outside its shell and then hitching a lift on the unsuspecting Lin, commanding her in a sneering baritone (spectacular work once again by Nick Briggs), the Dalek is scarier than ever. It's made clear this thing is a deadly threat even without the armour and weaponry we normally associate with it (even though it's hard to see how it didn't get squashed when Lin was driving it around). It rebuilds itself in increments, first recovering its (miraculously intact) gun stick and using it for prolonged execution of human obstacles, before rebuilding its shell from bits and pieces lying around. The finished junkyard Dalek is a design triumph, still recognisably a Dalek but just different enough to be effective, and clearly a cobbled together version rather than some old prop that's been dirtied up.

On the other hand, the fact that the Dalek was defeated back in the ninth century by a bunch of primitives with swords and flaming torches reduces its threat significantly. I'm fine with the Doctor using Chekov's oven to blast it with microwaves sine that's the sort of improbable techno-wizardry we expect from her, just like the Dalek being able to fight off tanks when it's wearing a few old bits of Dalekanium and some farming equipment. A bit of steel and fire though should not have stood a chance. The opening is frankly strange in any case. Aside from the question of what the hell a Polynesian, a Russian and a Briton are doing interacting in the ninth century, it serves only to provide a cool and epic opening monologue. The Dalek is hacked into three bits and buried in opposite sides of the globe, only to beam itself back together as soon as one chunk is revived. Narratively, it's almost entirely pointless.

However, for the most part it works, because not only does the Dalek get to be a threat, but it gets to have a character, and, crucially, it has achieves no redemption. In both "Dalek" and "Into the Dalek," the eponymous creature is tainted with humanity and becomes, to some extent, redeemed by the episode's end, forcing the Doctor to end hostilities. It would have been very easy, and entirely wrong, to allow Whittaker's Doctor to come to a similar conclusion. The thirteenth Doctor has been unequivocally pacifist during this last season, at least in word if not always in deed. Talking a villain down or giving them a serious telling off is not something that can be allowed to work with a Dalek except in very, very unusual circumstances. To have the Doctor offer the Dalek one final chance to flee before giving it a microwave suntan without pity is exactly right. We desperately needed the Doctor to be pushed to the point where she'd actually fight, and if the Daleks can't do that, nothing can.

Whittaker's a joy to watch as usual, and gets to finally own an episode, but her companions aren;t given the same opportunity. The best served is Tosin Cole as Ryan, who finally gets to sit down and confront his absent father (Daniel Adegboyega), and while he's hardly the best actor in the ensemble, he shines with personal, family material like this. Whether he should have forgiven his father is a matter for debate, but Doctor Who should be a hopeful show, so I think it's the right conclusion. Bradely Walsh gets less to do as Graham, being deliberately left out of the main action for a while so that he can talk to his stepson Aaron, but his performance remains one of the best elements of the series. It's Mandip Gill's often overshadowed Yaz who is seriously overlooked her, with very little to do, even though there was a perfect opportunity to have her deal with her police connections. Chibnall desperately needs to find her some material that she deserves.

Even though the series continues to struggle to give three companions enough material, here we get three more pseudocompanions. Nikesh Patel as Mitch is essentially companion number four for this episode, and he's charming enough to convince as a potential returnee, but it's Charlotte Ritchie, who is magnetic as Lin and unnerving as the Dalek puppet, who steals all her scenes. It has to be said that Lin and Mitch display more chemistry in their initial scene than Team TARDIS do all episode. Adegboyega does well as Aaron, both sympathetic and rather pitiful, although shoehorning him into the TARDIS as well is a bit of a contrived way to give his story some, (sorry), resolution.

Still, with the usual Chibnall caveats that the writing is at best competent and at worst baffling, this was a fun and exciting special that gave series eleven the finale it needed. It's going to be a long wait till 2020 (another bizarre decision), but at least 2019's sole episode was a hit.


Wardrobe Department: Yes, the Doctor's new scarf really is very snazzy, but Graham's got some good scarf game this episode too.

The History of the Daleks: The arrival of the Dalek scout on Earth in the ninth century pushes Dalek activity back a lot further than previously thought (assuming that the Dalek isn't a time traveller, of course, which is never stated but is by no means impossible). Parkin and Pearson's AHistory suggests an eighth century date for Genesis of the Daleks, which is not too hard to fit with Dalek scouts travelling in space in the ninth but would suggest that they weren't entombed beneath the Dalek ciity for very long at all. The Dalek scout is far more advanced than an immediately post-Genesis specimen ought to be, though, even if it is a souped-up special version.

On their more recent history, I guess we just have to assume that neither the earlier Dalek appearances in the 21st century just never happened anymore. Moffat realised that it was basically impossible to allow "Journey's End" to exist and maintain any kind of sense of reality for contemporary scenes, so stuffed it down a crack, and "Dalek" was hard to reconcile with "Doomsday" from the get-go. Maybe with UNIT in suspense due to funding cuts and Torchwood seemingly defunct there won't be anymore retcon in the water and people will start remembering the periodic alien invasions again.

Dialogue Triumphs:
Dalek: "Who are you? Identify!"
Doctor: "Oh, mate. I'm the Doctor. Ring any bells?"

Dialogue Disasters: Jesus, did no one think to cut the line referring to the Dalek as a refugee? That is tone deaf in the extreme.