2018 has been a pretty good year for Doctor Who in comics, with Titan printing ongoing and limited series for the seventh, ninth, tenth, eleventh, twelfth and thirteenth Doctors. I dip in and out of the Titan releases, usually with the UK-published editions – these are a few months behind the American releases, but not as much as most such repubs, and are far, far better value for money. I might come back to the Titans later, but for now I'm going to take a look at the other major Doctor Who comics publisher, Panini.

With the ongoing comic strip in Doctor Who Magazine, Panini is continuing a series that has run virtually uninterrupted since 1979, beginning with the fourth Doctor strips in Marvel's Doctor Who Weekly right up to the thirteenth Doctor stories in this week's DWM. The magazine is the sole publication that I still subscribe to, and I've been reading the comic strip devotedly every month since the high and heady days of the eighth Doctor strips.

2018 started in the shadow of the twelfth Doctor's regeneration, in the strange hinterland between Doctors. It's a strange period when the Doctor in the strip isn't really the current Doctor anymore – we'd already seen Capaldi turn into Whittaker on Christmas Day – but it's too early to show the new Doctor having adventures. And it was a long stretch this time, with a particularly late start for the new series.

The first strip of the year, The Phantom Piper, actually started in November 2017, and continued story elements that started in the eleventh Doctor era, right back in The Child of Time story arc in 2011. I love this aspect of the DWM strips, carrying forward stories and characters for years, revisiting old settings and old friends and enemies. It makes the strip feel like one, long story, in spite of the dozens of editors and writers, hundreds of individual adventures, and all the different Doctors it's featured. The Phantom Piper sees the twelfth Doctor and Bill searching for an explanation of a strange glyph that has appeared on the shell of the TARDIS. The Doctor elects to ask his friend Alan Turing, which leads Bill to change into WWII period clothes, only to step out onto the surface of the Moon. 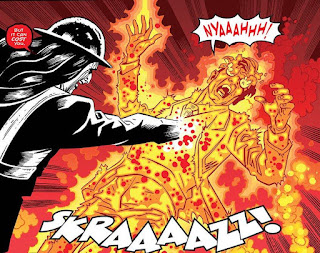 The Doctor has taken her to Athenia, a far future colony where human and AI beings called Galateans live together. Here, a robotic recreation of Alan Turing continues to live and work, free to be who he wants to be. However, there's conflict brewing between the humans and Galateans, with the old problems of two groups of people blaming each other for their problems because they don't like those who are different. Into this steps the Phantom Piper – the very same psychopomp feared by Jamie McCrimmon – the King of the Dreamspace. A demonic and brilliantly realised monster, the Piper foments and lives off warfare, and uses the Child of Time Chiyoko to bring himself and an army of phantoms to life. The symbol on the TARDIS is the final part of the code, and the Piper has manipulated the Doctor into bringing it to Athenia so that he can achieve physical existence.

It's a gripping story, with plenty of action and heady sci-fi concepts, but also examines themes of identity, difference, conflict and responsibility, with both Turing and Chiyoko forced to look at themselves but ultimately coming to accept their strange natures. There are a lot of characters for an action-based strip, many of whom are returning characters from years ago, and I do think it's a better story for long-term readers, though, who are particularly rewarded for their commitment when former companion Fey Truscott-Sade suddenly appears at the end (thoroughly rattling the Doctor).

Fey was an on-again, off-again companion of the eighth Doctor during the late 90s/early 00s run of the DWM comic, to my mind one of the greatest periods of Doctor Who in any medium. An unstoppable secret agent who provided the skills and muscle when the Doctor needed them, she was last seen exploring the universe bonded to the Gallifreyan AI Shayde, whose first appearance in the strip was alongside the fifth Doctor in the 1980s. So, yeah, I can see why this might be utterly baffling for newcomers. Still, I managed to pick up a lot of this without in-depth explanation when I started getting the magazine halfway through a strip story, and the stories, when well-told, are easy enough to to get to grips with even with limited background. 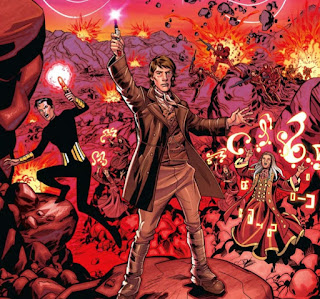 The next story, The Clockwise War, manages to be perfectly rewarding for devoted followers of both the modern TV series and the DWM comics, bringing the Time war crashing into the middle of the ongoing narrative. Much like the eleventh Doctor series from Titan, The Clockwise War heavily features flashbacks to the Time War, in this instance featuring a younger War Doctor, before his hair greyed and still idealistic enough to still go by the name the Doctor. This doesn't quite mesh with what we saw onscreen, but that was vague enough that it still works, and this tale of a catastrophic lapse in judgment by the Doctor on the frontline gives a much stronger reason for him abandoning the title. It also makes perfect sense that the Doctor would recruit soldiers from his travels to help fight in the War, and bringing in Fey – already part-Gallifreyan thanks to her link with Shayde – works.

It's devastating to have this character back only to have her back as an enemy, twisted by her experiences in the War and what she sees as her betrayal by the Doctor into opposing him at every turn. The events of The Phantom Piper and its preceding stories are revealed to be part of her overarching plans to defeat the Doctor and reignite the Time War to her own design. It's one of those massively overcomplicated plots that Doctor Who does so well, running for a whopping seven instalments across time and space. The confrontation between the twelfth Doctor and Fey is gripping, but the most powerful elements are the flashes back to the War, with a real look at the nightmarish possibilities of a war utilising space, time and reality as weapons. It even creates a new villain spawned by the War, the Absence, who manifests as a very Thanos-like humanoid, but is a blindside for the real cause. It's one of the best stories the strip has run in years; a real epic but with personal stakes and drives for the Doctor and his friends. Huge plus points, as well, for featuring the Time Lord General and giving her the name “Kenossium.” 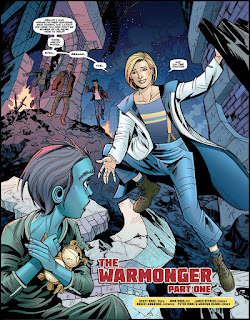 The Clockwise War is a suitably grand finale for the twelfth Doctor in the DWM comic, providing him with an emotional farewell while also drawing a line under the Moffat era of the TV series. October saw the beginning of the first strip to feature the thirteenth Doctor with The Warmonger, which finished this month. A mere three stories in one year, but that's what happens when you run long tales like this. The Warmonger is good fun, but presents a less sophisticated story than the preceding two. Then again, a new Doctor brings a new set of fans and potentially new readers, so leading with a pretty straightforward story is not bad thing.

The Warmonger sees the thirteenth Doctor and her crew arrive on Gatan, a ruined planet where two indestructible aliens have spent the last few years battling it out, seemingly oblivious to the destruction they have left in their wake. Not only that, but the endless fight is being televised, by none other than Berakka Dogbolter – the daughter of the recurring villain Josiah Dogbolter first introduced in the 80s strips. Is it a good idea introducing a new Doctor with what is, essentially, an old villain (albeit reworked with a new gender, rather like the Doctor herself)? I think it works, since once again, everything is sufficiently explained, and the sketched-in backstory for Berakka doesn't matter a jot if you've not read the strip before. It's just another bit of background colour for the Doctor and her universe. For a long-term fan of the comics, though, it cements this as yet another instalment in this ever-running comic. Even with another sudden shift to a new Doctor and new companions, this feels like it's part of the same story as The Clockwise War, The Flood, The Moderator and The Iron Legion.

The story here is a simple tale speaking out against exploitation, rampant capitalism and unending warfare. All things that we should be against, but sometimes there's no need for subtlety. This is a story that improves as it goes along, and it makes better use of the companions than a lot of the TV episodes of the recent series: Yaz is utilised well, paired off with a native character that allows her to take charge of a plot thread, while Graham and Ryan work really well as a pairing on their own thread. Plus Ryan dons a robotic suit of armour to save the Doctor and immediately falls over, which is the sort of dyspraxic behaviour we'd actually expect from him. It even gives the Doctor an opportunity to use pacifist ideals against the villains, and actually come up with a workable, non-violent solution to the threat, something the TV series hasn't really managed so far. It's a pretty decent first story for the thirteenth Doctor and a good start for 2019.