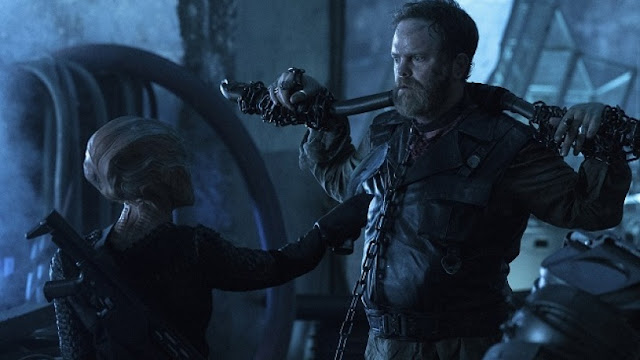 “The Escape Artist” rounds off a very mixed bag of mini-episodes that make up the first set of Short Treks. After a fun but wonky character piece with “Runaway,” an excellent sci-fi short with only tenuous links to the main series in “Calypso,” and a decent but unoriginal flashback in “The Brightest Star,” Short Treks explores one of the best received guest characters of Star Trek: Discovery.

Harry Mudd appeared in only two episodes of the original Star Trek, and one episode of the short-lived animated series, played in all three by Roger C. Carmel. In spite of this short tenure on the series, Mudd was the only recurring villain character in the original series (the Klingons Kang and Koloth joined him in returning for the animation). Returning, reimagined characters are the modern fashion, though. Discovery's first season recast Sarek, Captain Pike and the Enterprise's Number One are due to return in the imminent second season. However, these characters are significant elements of the franchise's backstory (with the exception of Number One, but her character is mysterious enough to intrigue and was originally intended as a major regular character).

Why Mudd? Why reimagine and recast a relatively minor villain, who was never much more than a nuisance to Kirk and the Enterprise crew? Why is Mudd popular enough, and well-enough remembered, to be brought back as a recurring villain for Discovery? Surely, it's because he's fun. Harry Mudd, the galactic rogue, captures like no other character the charm and silliness that made the original Trek so much fun, that was too often lost in later iterations of the franchise. As fans remembered the series as more serious than it ever really was, the daffier, more sitcom-esque elements were quietly forgotten.

Discovery, although not without humorous moments, is a very serious show, and bringing back Mudd injected a much-needed element of fun into the wartime adventure. Now played by Rainn Wilson, an actor best known for comedy, it would have been easy to portray him much like the charming, naughty crook of the original. However, this would have been a very uneasy fit for Star Trek: Discovery's bloody universe, and so the character was reworked. Wilson's Mudd is a darker character, a genuine threat whose rap sheet has expanded from petty theft and cons to include multiple attempts at murder. However, Wilson retains the roguish charm and humour of the character, and makes for a fine modern Mudd.

So far, Mudd has only appeared in two full-length episodes of Discovery, although his star turn in “Magic to Make the Sanest Man Go Mad” helped that episode become easily the most enjoyable of Discovery's first season. Bringing Wilson back as Mudd for this last Short Trek is an obvious and effective idea, and Wilson not only carries this episode effortlessly but also directs it to great visual effect. “The Escape Artist,” written by Michael McMahan, turns out to be the most entertaining episode of not just Short Treks, but all of Discovery so far, combining humour, wit, peril and a visual style that set it above most episodes.

Finding Mudd in the clutches of a bounty hunter is hardly surprising given his activities, and it becomes clear that the crook has enemies across the galaxy. Handed over by a masked alien female (with a voice modulator that's a clear reference to the bounty hunter Boussh in Return of the Jedi, only this time with the gender disguise switched), Harry finds himself in the clutches of a vengeful Tellarite named Krit. This tusked mercenary (played by Harry Judge, who also portrayed the Tellarite admiral Gorch in the Discovery's main run) has two bones to pick with Mudd: not only did he sleep with his sister, he then absconded with a very valuable ceremonial cudgel. After reading through an ever-growing rap sheet that includes the charge of “penetrating a space whale,” he plans to hand the crook over to Starfleet for a reward.

Harry has escaped from tighter scrapes than this before, and he isn't going to give up just because of some Tellarite with a grudge. While trying such tactics and bargaining, begging and political maneuvering to convince Krit to let him loose, he recounts his previous escapes from the many beings who have previously captured him. We see Klingons, Orions and unnamed aliens capturing him, stringing him up and being subjected to his various attempts at renegotiation. It's all exactly what we'd expect Mudd to do. Most interesting is a brief tactic when he claims to be part of the resistance against the Federation, something that doesn't seem to really exist but casts light on the universe of Discovery. Following on from his verbal attacks on Starfleet in “Choose Your Pain,” it seems that Harry really does see himself as a heroic thorn in the side of the monolithic Federation, and while Krit doesn't buy it, he does show enough sympathy and interest to make it clear that there are plenty of people who don't like the Federation's way of doing things.

Of course, all this comes to nought, and Krit hands him over to the first Starfleet ship he can reach – which turns out to have half a dozen identical Harry Mudd's already in custody. The Mudd in Krit's custody is an android copy with a scanner-fooling skin, just like all of them, while the real Mudd comfortably slips off his feminine disguise back on his own ship, having received a bounty for himself. It's a genuinely clever, left-field twist, that works perfectly in a short, tightly constructed episode like this. What's more, it highlights the cleverness of Mudd, so we can really believe that he's gotten away with any number of crimes and escaped capture.

Writer McMahan is best known for his scripts for Rick and Morty, and it's no stretch to imagine Rick using a very similar gambit to evade capture himself. In fact, you could easily adapt this episode to work for the animated comedy. (Indeed, with that show's loose approach to continuity, a sudden acquisition of programmable androids would be easier to swallow. All we know about setting of “The Escape Artist” is that it must happen after “Magic to Make the Sanest Man Go Mad,” but it's tempting to think it's over ten years later, when Mudd has escaped from the android planet in “I, Mudd” and taken a few with him.) McMahan is now onboard to run the upcoming animated comedy series Star Trek: Lower Decks, and on the basis of this short, the series could really work. Indeed, I'd hope we have a return appearance from Harry Mudd in both Discovery and Lower Decks. With the franchise's overseers talking about various potential spin-off series, I have to wonder why they've chosen Mirror Georgiou as the best candidate for a miniseries, when Wilson's Mudd is clearly the best choice to shoulder his own show.