The last time I saw this much sentient fungus onscreen, it was on the Super Mario Bros. movie. Discovery's fifth episode seems to finish the "setting up the pieces" part of the season, with two separate story strands that come together to provide a complete set of characters and concepts to be going along with. Of the two threads, though, one works much better than the other.

BIG SPOILERS from here on out, if you've managed to avoid them so far, somehow. 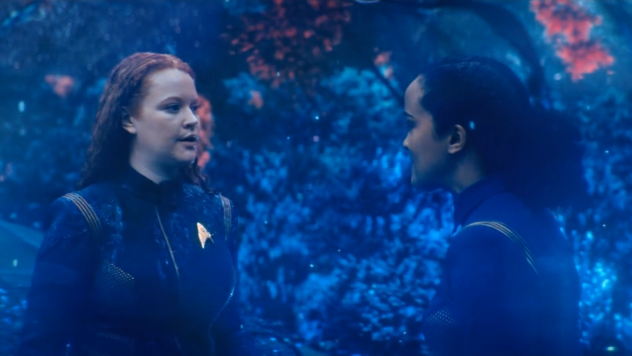 The first strand sees Mike and Pike finally gain on Spock's shuttle, and forcefully bring it aboard. It looks like we're finally going to get to meet Discovery's version of Spock as the shuttle doors open... and then bloody Georgiou steps out. Michelle Yeoh spends all of her screentime chewing at the scenery and wallowing in heavy handed serpent metaphors. As much as Yeoh is clearly enjoying the chance to play a hammy villain, I'm just not convinced by her in this role, and I find myself missing the noble, original version of Georgiou more and more. There's nothing wrong with an over-the-top villain like the Terran Empress, but she seems to belong to a different show completely. Georgiou drops the bombshell that she is working for Section 31 and has been tasked with finding Spock.

When section 31 was introduced in DS9, it was a shadowy secret society that answered to no one and didn't officially exist. Here, it's a recognisable division of Starfleet Intelligence, murky but not invisible. They have their own uniforms and instantly recognisable black badges (which are actually combadges, a neat touch that puts the Section's technology far ahead of general Starfleet). Not only that, but it seems everyone in Section 31 knows either Pike or Mike. The captain of the Section 31 ship, Leland, knows Pike from years ago, and he sends Ash Tyler to be his agent on the Discovery. At this rate, we'll find out that Michael's birth mother is actually alive and heading the organisation. Fortunately, Alan van Sprang is a class act as Leland, and his dialogues with Pike make for some of the strongest moments in the episode.

The more successful of the two strands sees Michael and Culber on a mission to the parallel plane of existence that comprises the mycelial network, to rescue Tilly, who has been beamed there by May the Mushroom. To manage this, they power up the spore drive again and submerge one side of the Discovery in the extradimensional space. Anson Mount's performance as the thoroughly incredulous Pike sells a lot of this episode, as he does some excellent Captain's chair acting while questioning the sanity of Stamets's plan. Anthony Rapp is really excellent in these scenes as well, although the moment where he sees Tyler, the man who killed his boyfriend, is not afforded the time or focus it deserves.

The best parts of the episode are those set in the network itself. It's not often we see a truly alien environment in Star Trek, and the mycelial dimension is a visual extravaganza. A plane of glowing fungal organisms, toxic red trees and firefly-like intelligent spores, it's unlike anything we've seen before. Tilly's initial reaction to being broken down to her component molecules in a fungal cocoon and beamed into another universe is a perfectly understandable panic attack, and she lashes out at May. Mary Wiseman is on top form this episode, never going too over-the-top as she sometimes does. Her relationship with May moves from fear to acceptance to friendship a little too quickly, but it works. You do have to wonder why May didn't just ask for help in the first place, though. Still, the mission through the partially submerged Discovery in search of a "monster" is a wonderfully spooky sequence.

It's not too long before we find the "monster," and, in a none-too-surprising revelation, it turns out to be Hugh Culber. He's alive but not terribly well, having been reconstituted in the mycelial realm and managing to survive there for months, in spite of being deadly to May's people. The JahSepp - the little floating spore people - have been trying to eat him and turn Hugh back into organic building bricks, and understandably he's been trying to defend himself. Wilson Cruz and Anthony Rapp recapture their chemistry from the first season, and there are some really beautiful moments where they rebond and try to convince May to beam Hugh back to reality.

It's an unusual episode which, in spite of the risks to the ship, ends with fewer people dead than it started with. The half of the episode that deals with the rescue mission to the Mushroom Kingdom works better than the Section 31 stuff, being far more ambitious, creative and overall better-acted, even though it's more outlandish. It ties together well, though, with Leland and his ship helping rescue the Discovery, and with Michael's struggle to deal with the return of both Georgiou and Tyler, and the potential loss of Tilly, providing an emotional core. Bridges are built between Section 31 and the Discovery crew, with even Georgiou showing a moment of apparent altruism, but it's a fragile truce that is bound to come tumbling down when they finally find Spock.
Posted by Daniel Tessier at 18:18