I've been enjoying the second season of The Orville so much, I've decided to start doing quick episode reviews (perhaps I could try Captain's Blogs of these one day - would anyone fancy those?) After an uneven first season that eventually settled down to a pretty decent show, season two has built on these episodes and really come into its own. The Orville has carved a place for itself as both an ersatz old-fashioned Star Trek and a modern take on the genre that mixes sitcom silliness and serious sci-fi.

This was originally meant to air a bit later in the season, but I'm guessing it was bumped up to the season opener to reflect "Amok Time," which opened the second season of Star Trek. To be honest, the parody of "Amok Time" only works as far as the framing story, but is pretty brilliant. Lt. Cmdr. Bortus has to return to Moclus to take his annual urination, a major ritual to which all this family and friends are invited. We learned that Moclans only wee'd once a year in the first season as a daft joke, but the idea of it being a significant cultural moment is both ridiculous and actually completely believable. I mean, we pin absurd significance on all sorts of biological functions as humans.

The ja'loja of the title is just the excuse to get everyone uptight about looking for a date for the big day. Instead, we have a series of subplots that follow each of the crew as they journey to Moclus, in the best sitcom tradition. The best subplot is Claire's angry parenting routine, as she finds out her eldest is supposedly the bad influence on a right little shit in his class. It provides some wonderful moments between her and Isaac, which forwards their developing relationship. The episode also serves to introduce Mercer's new love interest, stellar cartographer Janel Tyler (Michaela McManus). It's a fun episode that fits the sitcom style more than the sci-fi, but that's no bad thing, and it serves its purpose well as a reintroduction to the main characters.

Another victim of reshuffling, this was meant to be broadcast last year, then it was kept over to be the second season opener, and then bumped along again. I can understand that the creators might have a difficult time getting the network to show this one. This one focuses fully on Bortus and his relationship with Klyden, as he resists the "sexual event" with his husband and instead gets it on with holographic Moclans in the Orville's equivalent of the holodeck. 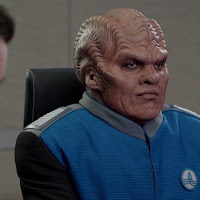 This is, frankly, a brilliant concept, and exactly the sort of thing this show can do that Trek would never get away with. We've had holo-addiction episodes before (generally with poor old Reg Barclay), but they never made the leap to their real-life equivalent. With porn addiction becoming a serious cause for concern in modern society, making an episode about it, and how much worse it will become as technology becomes more immersive, is a timely idea. This really works, thanks to some strong performances by Peter Macon (Bortus) and Chad Coleman (Klyden), who manage to remain as stoically Moclan as ever but fill it with some real emotion. I love that Bortus's isolation from Klyden is a result of their opposition of what to do with their daughter in season one's "About a Girl." There's some real social commentary going on here and it's a brave move for a silly show to treat it so seriously. There's also some good questions raised about just how far we should accept cultural differences when allowing what seems to us to be unethical behaviour.

Plus, I have nothing but love for this series making a race of Klingon-Vulcan hybrids and making them all big, black gay men. It's just designed to piss off the conservative Trek fans.

Planets visited: Nyxia, a planet about to be roasted by its sun, providing Bortus with his hero moment.
New aliens: Unk, a huge alien ballbag who comes from a species known for making the best pornography in the galaxy. He's actually a really impressive animatronic creature.

And so Halston Sage leaves the series as Lt. Alara Kitan returns to her home planet of Xelaya. Alara's been one of my favourite characters since the series started and that's mostly down to how incredibly likeable Sage has made her. Alara is one of the most capable members of the crew and yet she has suffered from a lack of confidence and self-belief throughout her time on the Orville, and it was obvious since their first brief appearance in season one that her family was responsible for a lot of this. It makes perfect sense that someone from a high-gravity planet would suffer from muscular atrophy if they lived in an Earth-normal environment - after all, this is exactly what happens to humans when living in space for long periods - but it's harder to swallow that a ship with artificial gravity doesn't already have something in place for her. But no matter - this is a contrivance to both force Alara to go home and spend time with her family and to show that even without her superhuman strength she is a remarkable security officer.

The sudden lurch to thriller territory is unexpected, with the two Xelayans victimising the Kitans in their own home becoming surprisingly violent. I love that they're wreaking their revenge because they and their son are staunch anti-vaxxers and Alara's father discredited him. More up-to-the-minute social commentary from The Orville. I'm not so keen on the B-plot of the temporary security officer joining the crew and grossing everyone out, but it does supply some comedy in a pretty serious episode.

Goodbye Alara, I shall miss your smile.

2-4) NOTHING LEFT ON EARTH EXCEPTING FISHES

The moment Janel Tyler joined the crew, the missus declared she was a baddie. After all, the last woman to take an interest in Mercer was a time-travelling villainess from the 29th century. The minutes the Krill ships appeared on their little holiday jaunt, she announced Janel was a Krill in disguise. In fact, Suz pretty much predicted every beat in the episode, which wears its Trek influences on its sleeve more than most. The general plot of having Mercer and the unmasked Teleya working together for survival on the planet is an old idea, and has been done in Trek several times, although the mountain climb to rescue calls back to the DS9 episode "The Ascent" more than any. Janel turning out to be a surgically-altered Krill is pretty much a dead lift from Tyler's story in Star Trek: Discovery - they even have the same surname! Meanwhile, the B-plot of Gordon taking his command training has been done before with Troi on TNG, and he stole ideas from "The Corbomite Maneuver" and "Tinker, Tailor, Doctor, Spy" in the simulation.

It's probably the weakest episode of the season so far, although it's enlivened by some decent performances from all the leads. It's good to have a follow-up to the episode "Krill" and Mercer's actions there, and it's easy to sympathise with both him and Teleya's stances. I enjoyed the Gordon subplot more, though, and it's good to see Scott Grimes get to play more than a lovable jerk. Cmdr. Grayson's heaping praise on him sounded false considering their character history, but given that Adrienne Palicki and Scott Grimes announced their engagement as it went to broadcast, we'll let them off because it's cute.

Trek links: This episode was written by Brannon Braga and Andre Bormanis, long-time Trek creators, so it's not surprising it feels very like a standard Trek episode.

Musical cues: I much prefer the use of popular 20th century songs to Trek's usual reliance on classical music and interminably average jazz.
Posted by Daniel Tessier at 20:51

Email ThisBlogThis!Share to TwitterShare to FacebookShare to Pinterest
Labels: reviews, The Orville