After an episode that proved Discovery can do classic Trek episodes in a modern style, episode three goes back to the elements that dominated season one, for better or worse. There's a lot going on in this episode, which pushes forward the Spock-centred arc, brings back the Klingons, develops Tilly's story and kicks off the Section 31 storyline. It's a busy set of stories to manage over fifty minutes, and this stops the episode getting slow or boring, but the episode doesn't ever really gel.

As with the season opener, Spock's absence acts like a black hole, deforming the story around it. Mia Kirshner appears as Amanda Grayson, Spock and Michael's mother, and she's great in the role now she's been given something a bit more interesting to do with it. Amanda's never been defined as anything more than Spock's mother and Sarek's wife, and while her character is still defined entirely in her relation to others, at least she gets to be spontaneous and proactive now. She's pretty badass here, actually, stealing Sarek's ship and Spock's medical data and going on an unauthorised voyage to meet Michael and Pike in the hopes of tracking her son down.

Still, long scenes of Michael and Amanda talking about Spock just draw attention to how much more interesting this would be if we finally got to see him. Supposedly he's gone mad and killed three doctors, something that everyone finds impossible to believe, although we've also seen Spock go mad with rage and nearly kill Kirk in the 2009 movie, which was written by showrunner Alex Kurtzman. So it's entirely possible that the mystery of the Red Angel – visions which have seemingly been driving Spock to distraction since his childhood, in perhaps the series' biggest retcon so far – really has made Spock violently unhinged. Or alternatively, it's all a big crock. But so far, all this talking about Spock just seems to be holding the story back; imagine if The Seach for Spock had taken two hours to get to Genesis and then Kirk discovered Spock had already left.

Michael and Amanda's respective relationships with Spock are laid out in detail, with both of them blaming themselves for his emotional problems, but it's all very hard to swallow. It mostly serves just to set them against each other, so that now it's Sarek who seems to be the most emotionally available person for Michael, which is a weird reversal. Michael is very much the central character still, with her relationships to both Tilly and Ash Tyler enabling their stories. Tilly has her own mysterious vision to contend with, a storyline that thankfully completes it run in this episode, because frankly, Bahia Watson's character May makes Tilly seem quiet and together. It's easy to believe that May's constant haunting would drive Tilly to distraction, and she's not exactly the most stable person to begin with. I'm a bit concerned about the state of mental healthcare in the 23rd century; we saw some grim asylums in the original series and now we have both Spock and Tilly treated like freaks because they're dealing with mental health problems. May, as suspected, turns out to be a fungus from another dimension, and that this was the obvious explanation just shows how weird this show can get when it wants to be. It turns out Mushroom May wants to talk to Stamets, who she thinks is the captain, but he builds a contraption to Ghostbuster it out of her. The resulting hovering blob has a definite Slimer vibe to it, and presumably now it's in captivity Stamets will be trying to use it to get Hugh back. 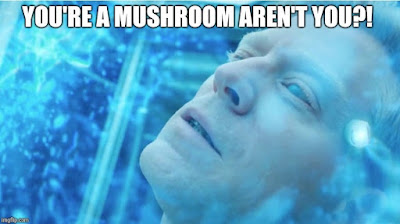 On Kronos, Tyler is rocking a hipster beard and a man bun, proving early 21st century shit fashion is still going strong in 240 years time. Meanwhile, L'Rell has had some work done. I'm really not sure about the re-redesign of the Klingons. I realise that a lot of fans didn't like the new look Klingons, but at least the designers were trying something different. I'd rather they just stuck with it, rather than going for this halfway house version. L'Rell's features are significantly softened, allowing a lot more of Mary Chieffo to come through, but otherwise the Klingons look more or less the same as before except with hair. I don't buy for a second the idea that they'd all shaved their hair off for wartime – the Klingons are pretty much always at war and have never gone bald en masse before – and while the addition of wigs and beards shows that without the baldness they're really not all that different to their TNG-style cousins, it still doesn't really work visually.

Frankly, I've always found Klingon politics among the more boring elements of Star Trek, and while it was mostly handled pretty well in season one of Disco, I could have lived without going back to Kronos for a Game of Throne-esque mix of infighting and soap opera. It's a nice touch casting Kenneth Mitchell as the father of his previous character Kol, but it's otherwise the same nonsense as before, just with, thankfully, less Klingonese with subtitles. It's understandable that most of the Council wouldn't trust L'Rell with a human by her side, after basically having been positioned as leader by Starfleet, and that they'd plot against her, but a secret baby contrived to exist just in time to act as a weakness to be exploited is lazy writing.

Still, hats off to some impressively gruesome moments here, not least L'Rell holding up the severed heads of her lover and son. There just aren't enough baby's heads in Star Trek usually. Of course, there's no chance for even a moment that they aren't faked – if Section 31 can't knock up a bit of baby's head in an afternoon, what are they for – but it's an effectively unpleasant way of furthering L'Rell's ascent to power.

Oh yes, Section 31. They're another element of Trek that I've grown rather sick of. They were extremely effective when introduced in Deep Space Nine, less so in the final episode of Enterprise and poorly utilised in Star Trek Into Darkness. Now they seem to be, not a covert operation existing on the fringes of Starfleet, but a recognisable black ops group with their own badges, ships and swooshy capes. I realise that Evil Georgiou is being set up for her own miniseries with Section 31, and while Michelle Yeoh has a very cool moment storming in to save L'Rell and Tyler for her own ends, I don't relish the prospect of a whole arc with this lot.

“Point of Light” refers to the system of Boreth, where Tyler takes his albino child at the end of the episode. Back in the TNG episode “Rightful Heir,” we learned that the first Klingon emperor Kahless pointed to the star Boreth and said his followers should look for him on “that point of light.” Centuries later, the most devout Klingons founded a monastery there.

Looking at old Klingon lore, a tenner says Tyler's still-nameless albino son grows up to become the Klingon villain the Albino, who still has a problem with Kol's House of Kor when he shows up in the DS9 episode “Blood Oath.” If they're the same character, by the time he reaches forty this kid is going to be a known criminal plaguing the Empire.

The novel Desperate Hours saw Michael and Spock meet a couple of years before this, and had much more realistic sibling rivalry as the source of their problems. This episode pretty much wipes it out of continuity though.