WHO REVIEW: Unbound: Adventures in Time and Space

Way back in 2003, Big Finish released a special series of Doctor Who audios name Doctor Who Unbound. It was a classic Elseworlds-type series, asking "What if?" of various points in Doctor Who lore and casting new actors in the role of the Doctor. Of course, the Unbound series wasn't the first time Doctor Who dabbled in the realms of possibility; alternative takes on the Doctor and his adventures have existed since Peter Cushing built a TARDIS in his garden in Dr. Who and the Daleks. 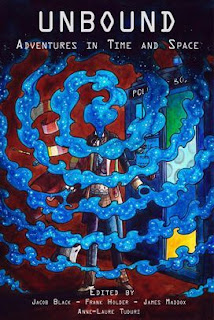 This new fanthology - available in physical and electronic forms for a very limited time only - sees a host of authors explore the strange possibilities of Doctor Who, asking not only "What if?" but also "Why not?" "You what?" and "Whatever next?" With all proceeds going to the Against Malaria Foundation, Unbound flaunts its unofficial, unauthorised nature to do things that would never happen in a licensed product.

Unbound features all manner of Doctors - old, young, noble, villainous, black, white. A couple are vampires and quite a few are female. Some are previously existing "other" Doctors, lifted from the many strange sidesteps the franchise has taken before. Paul Driscoll's "The Curator, The Journalist, and The Pearly Doctor" features two characters who are just destined to meet, and one who's entirely imaginary. Jacob Black takes on Lance Parkin at his own game and produces a follow-up to an array of Gallifreyan lore, as a sequel to The Tides of Time from the DWM comic and a prequel to the great The Infinity Doctors which strikes an almost mythic tone. Jake J. Johnson's story "The Interposition of Gervaise and Emma" is, unless I'm quite mistaken, a crossover between Telos's Time Hunter series and BBV's Dominie audios, a wonderfully obscure pairing. Peter Cushing Doctors turn up more than once, but never quite how you'd expect. "The Planet Collectors" by Nathan Mullins is a lovely adventure that ties in unexpectedly with the main continuity, while Richard Gurl's "The Crater Gas Element" features a completely different Cushing Doctor in a clever crossover.

Some look at paths the series could, or almost did, take, like Kara Dennison's entertaining "Thief of Hearts" which imagines how the TV Movie might have continued into new adventures if a punky Peter Capaldi had been cast instead of Paul McGann. Others see familiar Doctors in worlds that changed on a single decision or unexpected turn out to events. Janine Rivers imagines a different direction for the Doctor and Rose in "Victorious," while Arthur Lockridge imagines a mirror universe version of series ten in "Virtue."

There are horror stories, like Christopher Swain-Tran's unsettling "Under Her Watchful Eye," and "Shadow in the Blood," a New Adventure by Alec Kopecz. Niki Haringsma and Jim Mortimore create a remarkable graphic adventure, before Haringsma takes on the Unbound audio Exile and proves that something genuinely fascinating could have been done with that absolute trainwreck. In fact, the Arabella Weir Doctor isn't the only comedy-styled Doctor from sketches past who appears, and for that matter, not the only one we find drunk in a bar. It adds a touch of repetitiveness, but it's quite irresistible to think that when the Doctor's life becomes a parody they invariably end up drowning their sorrows.

The Master appears almost as often as the Doctor, their stories always intertwined. Perhaps unsurprisingly, the stories that feature the Master take a romantic slant, albeit in a weird, inhuman way. "The Master of Her Fate," by Elizabeth A. Allen amazingly reimagines the Shalka Doctor, the android Master and Alison Cheney as a functioning D/s triad, while "Everything Was Beautiful" by NataLunaSans sees the Doctor and the Master in a truly touching story that meditates on psychological healing and the nightmare of anxiety (my favourite story in the book, as it happens).

Some of the most interesting stories see the Doctor more as a concept than an individual, hingeing on the fascinating idea that anyone might be or could become the Doctor. Stories such as Charles Whitt's "Stardust in Your Eyes," Owen McBrearty's "Inheritance" and the bookending story "Cold Comfort" by Iain McLaughlin and Claire Bartlett are some of the most uplifting in the collection.

Some of the stories are moving; some are ingenious meditations on what Doctor Who could be; others are simply good, solid adventures where our hero wears a face we haven't seen before. I haven't even come close to describing all of them (and no disrespect to any authors whose work I haven't mentioned by name, this is collection is just full to bursting).

Doctor Who fans should grab it while they still can.

You can purchase Unbound: Adventures in Time and Space until the 15th of February here.
Posted by Daniel Tessier at 22:40