Two amazing visual resources have been made available online for fans of television science fiction.

The BBC Archives site has made high quality photos of empty sets available for download, ostensibly to use as backgrounds for Zoom chats, but really just because they look amazing. As well as multiple versions of the TARDIS console room, there are the bridges of the Liberator and Scorpio from Blake's 7, and laboratory sets from A for Andromeda and Quatermass and the Pit. The whole selection can be downloaded here. 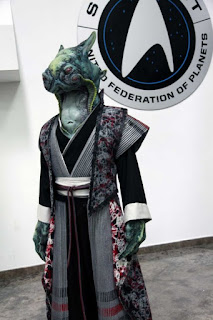 Meanwhile on The Trek Collective, a wealth of artwork and make-up tests from Star Trek Beyond. There are dozens of aliens here, from the familiar Vulcans and Orions through to the new creatures created for the film. A lot of these designs never made it to the screen, or were only visible to the most eagle-eyed viewer. I like that it starts with the Shlerm, which is absolutely canonically the name of the species according to Memory Alpha.

As well as early designs, which I've always loved to see as they go through variations on their way to the screen, there are make-up tests for Idris Elba in his various stages of monstrous make-up as the villainous Krall, and Star Trek Continues' Fiona Vroom, taking up the Orion mantle again for a minor role in the film. Interesting to see that new designs for both Andorians and Ferengi turned up in the early stages, although neither made it to the film. When it comes to the more original creations, I feel like a lot of them have a more Men in Black vibe than what we'd usually expect from Star Trek.