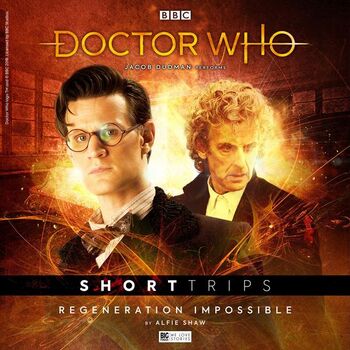 Jacob Dudman has proven himself to be something of a phenomenon. Going from YouTube fan performer to the main reader for Big Finish's new series audiobooks. His impersonations of the Tenth and Eleventh Doctors are spot on, and his Twelfth Doctor is getting better every time I hear it. BF has released four Short Trips featuring Twelve so far (plus a subscriber exclusive) and three of them have been read by Dudman, plus he is the main reader and performs as the Doctor in their Tenth, Eleventh and Twelfth Doctor "Chronicles" series. I'm sorely tempted to get The Eleventh Doctor Chronicles and The Twelfth Doctor Chronicles just on the strength of this latest release.

The previous shorts have included "Dead Media" by John Richards and "The Best-Laid Plans" by Ben Tedds, which were both great stories utilising Twelve well. Dudman's version on Twelve was good, but not quite there, but with "Regeneration Impossible," he really nails it. What's even more impressive is that this story isn't an audio reading as such, but an audioplay with three characters all performed by one actor. Dudman switches between the Eleventh and Twelfth Doctors plus their enemy, once revealed. It's a fantastic performance.

It's set in Victorian London, almost entirely in a morgue, while the Eleventh Doctor is sulking on his cloud. He's drawn to the morgue by the sudden surges of artron energy there, expecting to find another Time Lord. Instead, he finds his next incarnation, who is burning through regenerations, only to dump the excess energy into a human corpse so as not to actually change.

Of course, Eleven can't believe that this is his future self, since he knows he's on his last regeneration. It's a bit of a retcon, of course, since that was calculated in afterwards, but it makes sense. Twelve doing his utmost to hang onto his current form and not regenerate is, of course, completely in character (don't believe those who say his death wish in "Twice Upon a Time" came from the blue, it was right there in "Deep Breath"). The resolution of the plot is very clever, although exactly how we factor in the Timeless Children revelations is anyone's guess, but let's not get drawn into that whirlpool.

Multiple Doctor stories, though, are all about the clash of personalities. They work best, I feel, when it's just two Doctors face-to-face, or at least focus on two particular incarnations (Day of the Doctor notwithstanding). The constant spat between flappy-arms and attack-eyebrows are fabulous, although by having the Eleventh Doctor in his own grumpy phase and Twelve towards his end makes for less of a clash than we'd have got, say, with a fifth season Eleven and an eighth season Twelve. Nonetheless, this is a great Doctor pairing and one that can only be topped by having the original actors appear together on screen. Until that day, this cannot be beaten.

For the Eleventh Doctor, before "The Snowmen." For the Twelfth, not long before "The Pilot."