After a strong introductory episode, Lower Decks settles down to an episode that probably gives more of a flavour of what the series will be like week after week. Things aren't quite as madcap this time round, with a more coherent storyline and more time for the main characters to develop. The episode has a clear "be true to yourself message" that's supported by the two story threads and sundry duplicitous aliens. It's still hugely funny and chock full of Trekkie Easter eggs that are great fun to spot.

The episode starts with a fun mini-story which sees a glowing energy alien menace Mariner and Tendi in a corridor. In a regular episode of Trek this would be the set-up for the entire story, but here the ludicrousness of a glowy ball threatening the ship is played up and Mariner even manages to rugby tackle it and stuff it in a tube, which makes about as much sense as anything to do with these incorporeal entities ever does.

The main part of the episode sees Mariner and Boimler on a mission to the planet Tulgana 4 (I initially thought they said Turkana 4 which would be much worse) involving escorting a Klingon delegate call K'Orin, who's old times besties with Mariner, to the Federation embassy. The clash of personalities between Boimler and Mariner is in force, with Mariner getting drunk with her Klingon buddy and Boimler putting on his dress uniform for a much more formal meeting. Once on the planet they go through one chaotic situation to the next trying to track down the drunken Klingon after he pinches their shuttlecraft, with Boimler's book smarts clearly not as useful on alien planets as Mariner's wits and experience. It also seems clear that Boimler thinks of Mariner as just as new to Starfleet as him, and doesn't realise how much more experience she's had before getting demoted. This plot goes on to a sweet but obvious resolution, with Mariner setting up an opportunity for Boimler to succeed, even if the more confident Boimler at the end is a bit of a dick.

The other thread sees Tendi and Rutherford make plans that clash with the cyborg's engineering duties, to which he makes the sudden, rather extreme commitment to quit engineering so his shifts change. As well as enjoying time in a Jeffries tube way to much, Rutherford seems extremely black-and-white in his thinking. It leads to a fun series of scenes though, with Rutherford trying on the different uniform colours for turns in command, medical and security. He's hopeless at the first two - his utter fouling of the command simulation is the funniest bit of the episode, particularly how he somehow managed to get a casualty rate of 105% - but he's a whizz in security thanks to his implant having an ass-kicking setting. The Borg battle is very cool, although you've got to wonder why more crewmen don't get an ass-kick protocol implanted.

One thing I really like is that the senior crew we see seem a lot nicer than the rather dickish people we met in the first episode. Ransom and Shaxs are really decent and encouraging to Rutherford when he joins their teams and when he decides they're not for him, and that's a much more Starfleet kind of attitude. It's only Tendi who wants for attention in this episode, but she does get some good moments.

The design of this series is one of its best elements. Not only does it look gorgeous but the animated format allows the artists to chuck in as many cheeky references as they can, and there's plenty in the script to begin with. Tulgana 4's big settlement is split into four zones - Little Qo'noS, the Andorian district, the Risian district and the Federation embassy - with a Farpoint Station styled spire in the middle. As they move throuhg the zones, Mariner and Boimler meet all kinds of aliens, old and new. The bulky, blue Taxor is a nice additon, as is the nightmarish Anabaj, but the most exciting alien was the shapeshifting Vendorian. That's not only one of the best aliens created for the animated Star Trek, it's never been seen since. Lower Decks just brought back an alien last seen in 1973. There's more: on Tulgana there are brief glimpses of Arcturians from The Motion Picture, Kaelons from TNG: "Half a Life," an Aurelian or Skorr (if there is, indeed, any difference) from TAS, Lurians (Morn's lot from DS9,) an Arkonian from Enterprise, some Evora from Insurrection and some centaur-like Ariolo from the Star Trek IV. On the sip we see a Napean (from TNG: "Eye of the Beholder,") and what might be a Xahean (from Discovery and Picard). I'm loving the classic aliens and the wonderful obscurity of some of these.

A more casual fan or someone new to the series would just see all of these things as cool aliens, and make no distinction between an attack by a brand new creation like the Anabaj and a return appearance by an old enemy like the Vendorian. What we have here is some fun space adventure that takes place in a colourful universe and is downright hilarious.

The best joke was probably the one about Section 31 and the power walk, though. 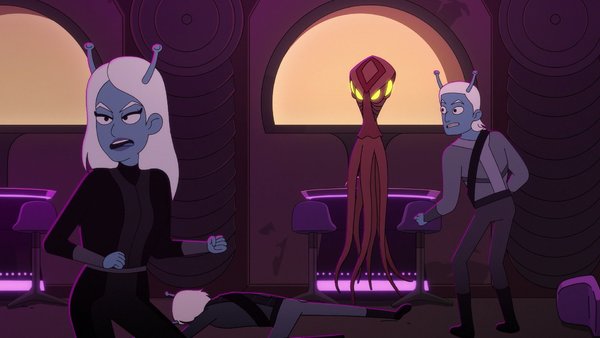