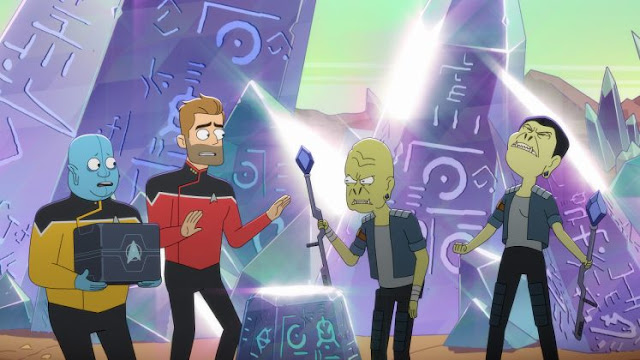 "Temporal Edict" was a very good episode of Futurama. Not such a great episode of Star Trek, though. It's very funny, can't fault it there, and I enjoyed it plenty, but it's far more like a parody of Trek than the first two episodes, which worked as Trek episodes in their own right. As funny as it to see a starship go to pot due to her captain working the crew into the dirt, it's hard to believe it's something someone in Starfleet would actually do.

It's good to spend a bit more time with the captain and first officer. The episode focuses heavily on Boimler and Mariner, pairing them up with Captain Freeman and Commander Ransom respectively, while Tendi and Rutherford don't feature much, but there's no way a half-hour episode can give everyone a big slice of the pie, and switching it around like this works well. The episode is split into two storylines, which are designed clearly to show how different Boimler and Mariner are. Mariner introduces the idea of "buffer time," the built-in downtime that Starfleet crewmen factor in to their duty estimates. It's basically the Scotty school of engineering statements: multiply each estimate by four so you look amazing when you do it in quarter-time. When Boimler lets this slip to Freeman, it leads to the uptight captain to create an impossible-to-meet work rota with zero slacking built in.

We follow Boimler through the consequent chaos on the ship, as the crew are driven to exhaustion and mental collapse by their punishing duty regime. Boimler loves it, of course, because he's a workaholic; it even prompts him to say, "Space, the funnest frontier?" in his log (he's presumably the only one ahead of schedule enough to record a log). He intersects with Freeman, who's increasingly desperate attempts to keep the bridge running while the rest of the crew collapses from exhaustion makes for some good comedy moments. Still, it's hard to see how someone with this poor an understanding of human capacity can ever have got command of a starship, even one on an undesirable mission.

Meanwhile, Ransom leads a team including Mariner on a mission to Gelrak Five, home to a race of primitive humanoids who've just been indicted into the Federation. I mean, they can't be that primitive if they let them in, they must have warp drive as a basic qualifier, but they use spears and worship crystals and seem pretty backward. They certainly don't look like prime Federation material, but only five years earlier (in-universe time)  on Insurrection we learned the UFP was letting in newly warp-capable civilisations at the drop of a hat just to keep their allies numerous following the Dominion War. (On the subject of the Dominion War, the Cerritos was supposed to be heading to a conference on Cardassia Prime, but apparently no one wants to go there. Except me. I'm dying to see post-war Cardassia.)

Mariner clearly has the smarts for these missions but she's so disrespectful and aggressive here that it's amazing she was just demoted before. I'm getting the feeling the only reason she's still in Starfleet at all is because her parents are a captain and an admiral.While Boimler's the Starfleet poster boy, Mariner's the fan stand-in, making jibes about the 2260s and squeeing at the old-school Trek stuff on the planet's surface. She and Ransom have an interesting relationship, with a mutual lack of respect moving to grudging respect as a result of this mission, helped out by some serious attraction on both sides.

The trial by combat is, of course, classic Trek material, and it even sounds like the original series during the fight (although Futurama would have used the actual TOS fight music, which was sorely missing here in favour of something with a similar feel). I liked the big, beefy champion actually being the smartest, most sensitive of the Galrakians, and Ransom's prodigious use of Kirk Fu. The "geode of judgment" or whatever it's called, however, is lifted directly from an episode of Futurama (4.6, "Where the Buggalo Roam"). A Futurama feel is fine, but that series should be lifting from Trek, not the other way round.

The plotlines meet when the Galrakians invade the ship and the crew are so exhausted and behind schedule that they can't even fight back, leading to Boimler convincing Freeman that she has to cut the crew some slack. ("The crew are only human... and Vulcan, Orion and Bolian... and there's that Benzite...") The episode has a decent punchline, with the new edict for the crew to slack off and take it easy being named the Boimler Effect, with Boimler unable to comprehend that he has a rule named after him that's about breaking the rules.

It's a pretty good episode, but it hasn't the punch of the first two, and it just feels like a comedy in space with Trek references rather than an actual comedy episode of Trek. Still, it's all worth it for that fantastic coda, where in the far future we see a Federation teacher tell her class about how the Boimler Effect changed Starfleet forever, before revealing the most important figure in Federation history. I won't spoilt it here because it prompted the biggest, barking laugh of the series so far, but rest assured he never quadrupled his engineering estimates.

Aliens of the week:

The Galrakians are pale green humanoids with slit-like nostrils instead of noses, worship rock formations and hate the wood-worshipping people of Magus Prime.

Life forms encountered by Commander Ransom include horned gorillas, sentient tar and "spores that make you hook up with your best friend's sister," so he's either been rifling through the Trek back catalogue or he's actually visited Neural, Vagra Two and Omicron Ceti 3.

The Federation classroom in the distant future has students who look human, but also Ferengi, an Andorian and, astonishingly, a Borg.