There are two ways to look at Red Dwarf, either as a sitcom that happens to be set in space, or as a science fiction show with jokes. Over the years, it’s tried both of these approaches, and they’ve both had a turn during this latest series. after an episode that went firmly down the sitcom route last week, for the finale Doug Naylor elected for a straighter, sci-fi adventure. That’s not to say it was low on laughs – far from it – but it wasn’t the rapid-fire of jokes and running gags that the previous episodes of this run have displayed. Nor was it light on character development, using the Simulant attack plot as a way to explore Rimmer’s deep-seated neuroses. 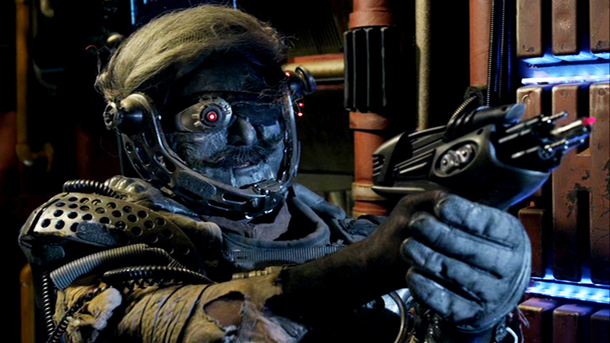 The episode starts unusually, with a flashback to young Rimmer’s days on Io. The poor sod not only has the overbearing father from hell, but it turns out he’s his teacher too. It’s an ingeniously scripted scene that wrings sympathy for Rimmer, before the punchline shows what a little shit he was even back then. Looking forward a big, exciting life-or-death escapade, I was a little underwhelmed at the clapped-out Simulant that boarded Red Dwarf  and began stalking its corridors. However, this was no Simulant, just Hogey the Roguey, hilariously played by Richard O’Callaghan. All this was set-up for the main plot, but provided much of the funniest material for the episode, before it got down to business. From this point, it was good, tightly-plotted stuff, with enough laughs to keep the mood from getting too grim. The scenes on the Simulant Death Ship, although removed from the crew of the Dwarf itself, were high points of the episode, with Gary Cady sublimely sinister as the Berserker Lord. As for that foul hara-kiri scene… good, sick, gory humour we haven’t seen the likes of since Series VI. 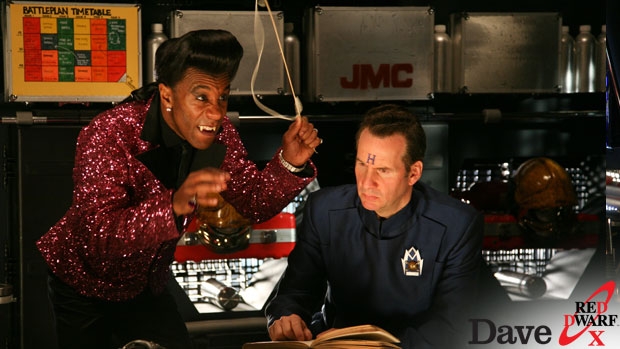 There are some hilarious moments on board Blue Midget, as the Dwarfers hide from their assailants. The weapons check that unearths merely two forks and a pencil sharpener; Kryten’s ninja towel-folding; the battleplan timetable that harks back to Rimmer’s exam revision timetable from the classic Red Dwarf novel … brilliant stuff. Yet there’s decent emotional work here too, with the Cat, of all people, seeing into Rimmer’s soul and helping to set him free. (Whilst playing with a stick and some string; I love how catty he is these days, just like in the first series.)The big hurrah of the episode comes with the “anti-Star Wars” moment, in which Rimmer’s father, via a holographic message, reveals that he is not his father after all. It’s Dungo, the gardener. For Rimmer to then use this as an inspiring revelation, becoming the “working-class hero,” is a wonderfully unexpected but perfectly appropriate turn of events. It’s only weakened by the fact that Rimmer had already undergone a heroic renaissance back in VI and VII, but this is long enough ago that a return to the same ideas worked as well again.

Problems? There are a few. Lister is a bit left out in this Rimmer-centred episode, but he’s had plenty of focus over the course of the series. Kryten, formerly the most capable and reliably intelligent member of the crew, is downright stupid in this episode. The Kochanski subplot that was mentioned throughout the previous episodes was forgotten, having gone nowhere and left me wondering why she was brought up so often before. Hogey’s Mole-D (aka “the wibbly gun”) is an obviously signposted plot element, and the eventual plan, although rather brilliant, is a bit stupid when you consider that either the Midget or any of the Simulant death ships could just move three-dimensionally to avoid the missiles. 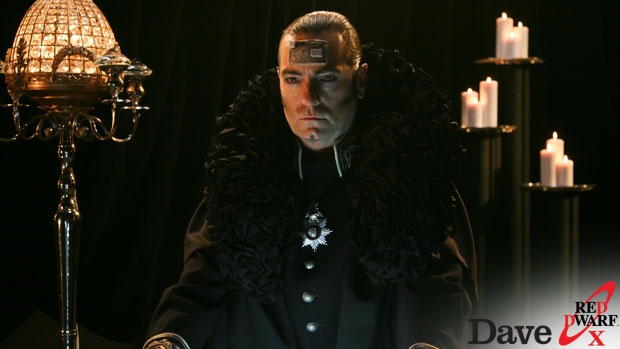 However, this a well-written, consistent, visually impressive and perfectly structured episode that provides a storming end to the series. Red Dwarf X was a mixed bunch of episodes, threatening greatness again and again but only really hitting it occasionally. However, barring the divisive Lemons episode, Series X has been consistently entertaining, and utterly hilarious at its best. The Beginning was clearly chosen as a title to reflect the very first episode, The End. If this is the final outing for the boys, it will be a fitting one. However, judging from the response to this series and the impressive viewing figures secured by Dave, I would be surprised if The Beginning was the end. They’ve still got that (suspiciously small) galactic map; who knows where it might take them in Series XI? 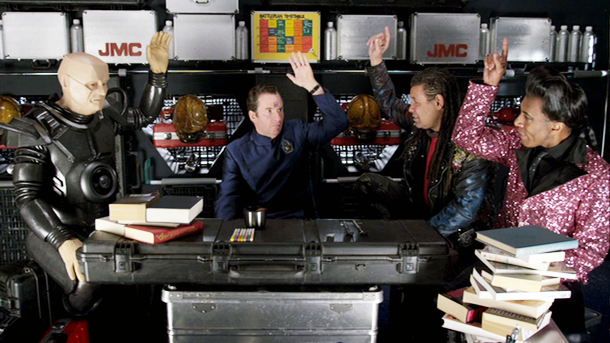 The Rimmer Question: This is a continuity-heavy episode, with plenty of background info for Rimmsey that ties nicely into what we learnt about him in years past. The big question of the series, though, still remains – which Rimmer is this? Before, the odd line referencing early episodes seemed to indicate it was the original, holographic Rimmer from Series I to VII, returned from his Ace adventures. However, this episode scotches that idea, by having Rimmer and the rest of the gang discuss the cliffhanger ending to Series VIII (cutting off just before we would finally discover how it was actually resolved, the sods). Somehow, this Rimmer saved the day, so he must be the resurrected human Rimmer from VIII, having since been killed again and brought back as a hologram.

This still doesn’t quite wash, though. Rimmer and Lister discuss his last words at the time of the radiation leak, something which none of the resurrectees in Series VIII remembered. Although the infamous “Gazpacho soup” line isn’t even mentioned. All most odd. Perhaps, just possibly, this is classic Rimmer, and he saved his other self from the corrosive microbe in Only the Good… After all, one plan for the end of that episode was to have Ace Rimmer save the day. He could then have rejoined the Dwarfers and handed the reins of Ace over to human Rimmer.  Except that here, Rimmer says he never became an officer. Classic Rimmer was posthumously promoted to First Officer at his funeral, when he faked his death to become Ace. Oh, I give up…

Kryten: “Although the Death Ship didn’t indicate the exact nature of their business, sir, I’m guessing it’ll be something a bit ‘deathy.’”