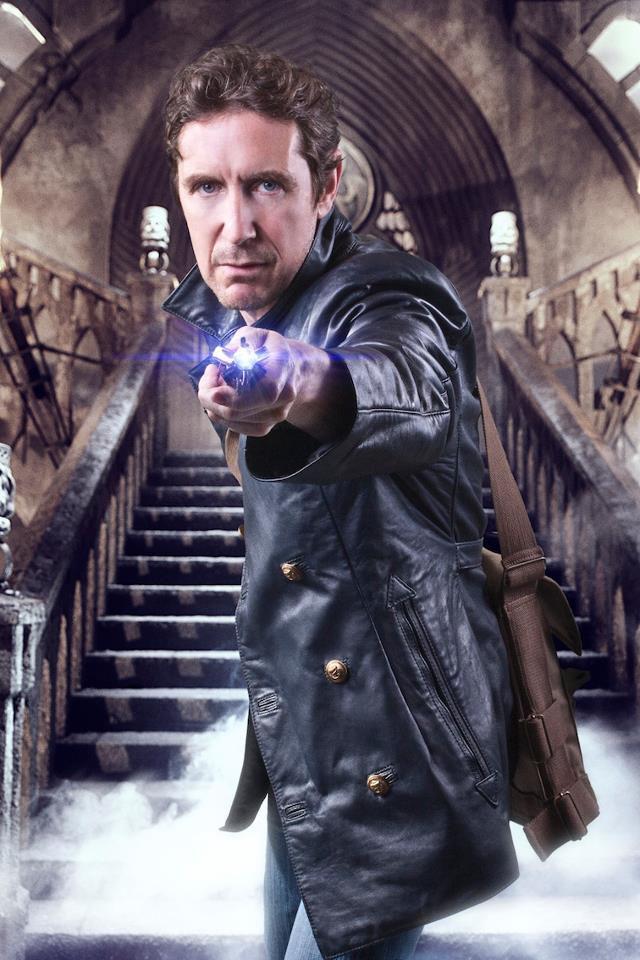 'X' AND THE DALEKS

Last year’s eighth Doctor finale, To the Death, left the Doctor in a very bad place. Now, having suffered terrible losses at the hands of the Daleks, the eighth Doctor returns with a new audio box set courtesy of Big Finish. Four feature-length episodes making up a single story, epic in scope, Dark Eyes creates a whole new chapter in the Doctor’s life.

The first thing one notices about this collection is how good it looks. The cover to the box set and the individual episode covers are all beautifully rendered, with brand new, specially shot photos of stars Paul McGann and Ruth Bradley. Most notable is the Doctor’s new look. It seems strange to worry about how the character dresses in an audioplay, but it really does make a difference, establishing this as a step forward for the eighth Doctor. For years, Big Finish have had to be content with a handful of publicity shots from the ’96 TV movie, showing McGann in his velvet finery. Now, the star has finally agreed to pose for some new shots, finally allowing the series to acknowledge that the Doctor has aged and matured over the years. I love his new look, masterminded by WETA – a blue leather peacoat, a manbag, a steampunk-styled sonic screwdriver and a shorter haircut. It not only reflects McGann’s take on the character – having been designed with his input – but also acts as a step towards the ninth Doctor’s battered look, something that ties in with the character’s development.  (He still has to have his frock coat ruined by mustard gas and mud before he changes, though). Plus, McGann looks mean, rugged and more gorgeous than ever.

So, that’s enough wittering about the look of things. The important thing is how it sounds. The last run of the EDAs must have provided a hard act to follow, but Dark Eyes does not disappoint.  While the term ‘epic’ gets bandied around far too much, it really does apply to this mighty story. Stretching from the end of time, through a desperate venture in the battlefields of World War I, back and forth in the history of the British Isles, to Gallifrey itself and across space to worlds unknown, this adventure is vast in its scope. The myriad settings are brought to life by Big Finish’s typically excellent sound design, evoking terror and wonder wherever the TARDIS materialises.
McGann, of course, is excellent. Over the years, his performance for Big Finish has varied somewhat. You can tell when he’s interested in a script and when he is simply marking time. Judging by his performance here, McGann has never been more enthused by a script than he is here. It’s wonderful to hear the angrier side of this Doctor. He so often gets stuck with the overexcited, childlike side of this incarnation’s personality. McGann is at his best when his character is railing against some injustice, and never has he been angrier or more anguished than here. His hope and optimism gone, this is a Doctor acting in desperation.  Dark and moody quickly become boring, however, and it’s to the credit of Nick Brigg’s script and McGann’s performance that his new friendship with Molly brings out his more positive side once more, without ever letting the losses he’s suffered be forgotten. 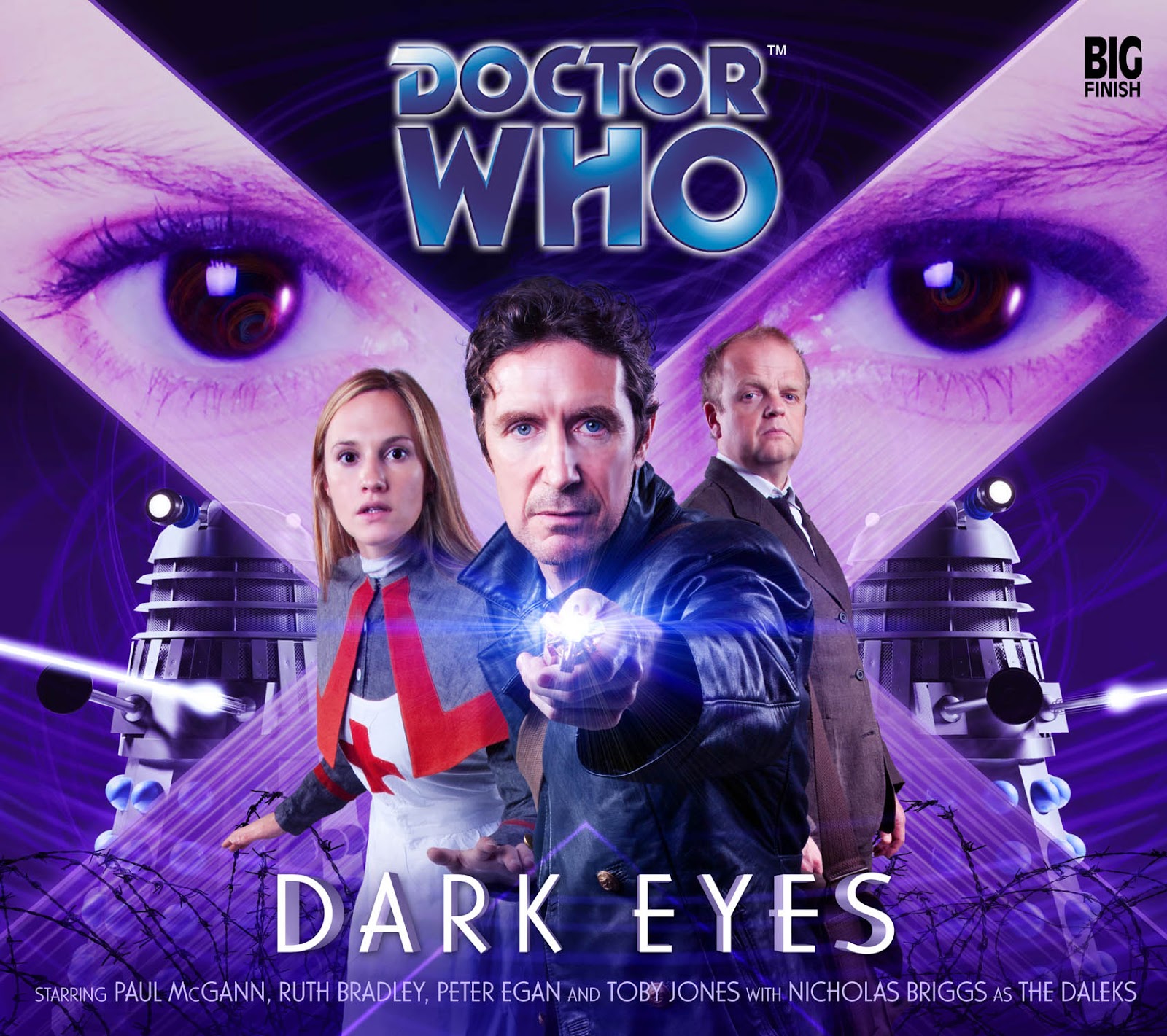 Molly O’Sullivan – the latest in a long line of companions. It must be tough to come up with new characters that stand out against the crowd, but with Molly O’Sullivan they’ve managed it. Ruth Bradley is perfect in the role. Rather than using her natural, soft brogue, she makes Molly roaringly Irish. She’s a blunt, working-class country lass, one who worked in domestic service prior to travelling to France to join the Voluntary Aid Detachment with her mistress. Back in a time when Ireland was still resolutely British, she knows her place in society but nonetheless has the utmost confidence in herself. When we first meet her in No Man’s Land, she’s abrupt and pragmatic, even bitchy, hardened by what she’s seen, but her experiences with the Doctor release her cheerful, good-humoured side once again. Just like the Doctor, in fact. They’re two injured souls who need each other to begin healing, and they make among the best Doctor-companion teams the audio range has ever produced.

It’s a complex story that sustains itself well over the four, long episodes. The Doctor is offered the chance to make a difference once again, sent to find a single, random girl who is somehow vital to the future of all time and space. Naturally, this is Molly, but the truth of her nature is revealed slowly, a tiny discovery at a time. She’s unfathomably familiar with the interior of the TARDIS, shows a natural aptitude for its piloting, and yet is resistant to its psychic translation effects. The Time Lord Straxus, having plagued the Doctor ever since the first series of the new EDAs, returns in a new incarnation, portrayed with haughty arrogance by Peter Egan. Straxus takes his orders directly from the Time Lord President (yet another one), directing the Doctor in his mission but never letting on the full truth.

What of the Daleks? Somehow, they are involved in all this, threatening the existence of the Time Lords. Nick Briggs knows exactly how to both write for and perform as the Daleks, judging perfectly the line between screeching monsters and plotting masterminds. Everywhere that the Doctor and Molly go, every adventure they find themselves in, the Daleks turn up. By their side is Kotris – aka ‘X’ - a villainous former Time Lord, played with aplomb by the great Toby Jones. Who is Kotris, and what is his true agenda? Is he truly on the side of evil? As to his real identity, it’s a fascinating mystery…

The story fair rips along, throwing curves at every turn, and the Doctor doesn’t come out unscathed. Yet it retains its sense of fun throughout, never letting go of the show’s essential good humour. There are some lovely touches, from the Doctor’s reliance on his ‘penny whistle’ (his screwdriver), Molly’s ribbing and enthusiasm (“My, there’s a thought and three quarters!”) and sheer wonder at the world opening up before her, and glimpses of Daleks that never were and never could be. It’s easy to see that this is leading to the Time War, something that Big Finish are prohibited from explicitly mentioning, and seemingly have no interest in directly addressing in any case. Nonetheless, we can see where these events will head in the long term. Amusingly, however, when confronted with a vision of a future in which the Daleks and Time Lords wipe each other out, the Doctor simply dismisses it as nonsense!

This is a story about war, on both an earthly level and a galactic scale, with no shortage of genuinely horrific moments. Yet, this is, throughout, a story about hope, and where it can be found in the most unlikely of places. Dark Eyes is a tour-de-force, and Big Finish have proved that there is plenty of mileage in the eighth Doctor. Here’s to the next chapter.

Also released lately: The 20th anniversary audio adap of Love and War, reviewed by E.G. Wolverson over at The History of the Doctor.
Posted by Daniel Tessier at 23:57