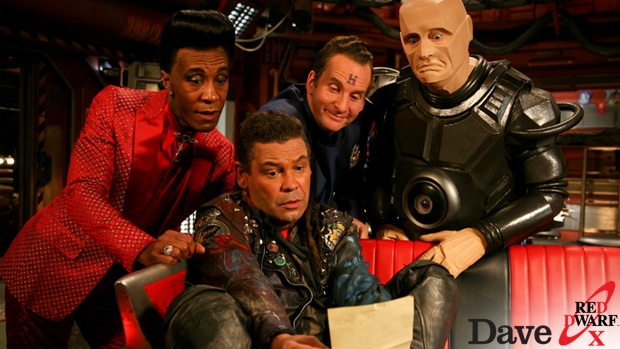 This latest run of Red Dwarf has made great use of running gags, and has also harked back to the popular early days of the series. Both of these elements reached their peak in this week’s episode. In fact, Dear Dave… is comprised almost entirely of running jokes, with various comedy set-pieces peppered in to keep things moving. The love triangle, such as it is, between Lister and two vending machines; Rimmer’s attempts to prove he is not derelict of duty; the reallocation of toilet paper away from “toilet active” crewmembers; Lister’s impending fatherhood; these are all played for the length of the episode, culminating in the final two scenes.

None of these plot strands would be out of place in Red Dwarf’s first or second series. The earliest days of the show focussed less on sci-fi concepts and more on Lister’s isolation and his painful relationship with Rimmer. From the outset, when we see Lister in his red long johns wistfully reminiscing about the human race, it’s easy to imagine this as a scene from the grey-tinted early years. Only Kryten’s presence is out of place (and even he originated in the first episode of Series II). 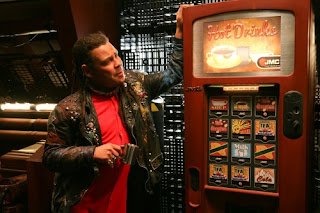 With the Rimmer’s report-writing and talking amenities on board ship, this really is a throwback to the early years, although in the old days the vending machines were all masculine and the show was a lot less sweary (but only because they couldn’t get away with it back then). Chuck a few skutters in, and it’d be hard to tell the difference between this episode and Balance of Power, and the last mail pod arrived back in Better Than Life (eight series and 23 years ago!)

It’s an obvious bottle episode, clearly made to save money before the big, end-of-season blowout, but this isn’t to its detriment. The regular cast all get a chance to shine, and the Cat in particular gets a couple of stand-out scenes (“finger-wetting machine” is destined to become a favourite obscene euphemism). The only guest cast member, Isla Ure, perfectly pitches both the love struck Vending Machine 34 and the exotic Vending Machine 23 (with a surprisingly sexy way of saying “logo.”) 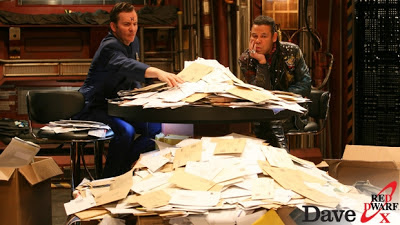 There are some great moments once again, and although the final vending machine love scene is very contrived, it made me laugh like the smutty schoolboy I was when I first discovered Red Dwarf. The celebrated charades scene isn’t, to my mind, as funny as some find it, although I’d love to know where Rimmer’s getting this “giant death worm” obsession from. Tellingly, most of the clips shown in the lead-up to this grand comeback were from this episode. This highlights the only real problem with Dear Dave… while all the elements work well in themselves, and there are plenty of memorable jokes, the whole thing fails to gel in the way most of the previous episodes have (I’m excepting the divisive Lemons instalment).

It’s easy to pick holes in the plotlines, if you’re looking to. Why does Rimmer need to come up with an excuse for his dereliction of duty? He’s got the perfect one, he’s dead! And after last week, we know what Lister would do if an attractive woman suddenly arrived on the ship; he’d let Rimmer get to her first and then accidentally get her sucked out an air lock. Lister’s possible fatherhood, however, provides the spine for the episode to hang off, even if he was knocked out in the finals.

Best Line:  “As long as it’s wet and melty you don’t care where you stick it.” (Lister’s been dunking his biscuits in the fish tank.)
Posted by Daniel Tessier at 23:35