I had a good Hallowe'en this year. I was lucky enough to get a weekend of work - a rare treat, since I work for William Hill and the retail and leisure industries involve weekend work. I generally have to work either a Saturday or a Sunday, and they usually end up as full days. Staffing it otherwise is possible, but difficult, since splitting shifts usually means people have to work for some time on both days. So we tend to do it this way. However, I'm owed quite a lot of hours, and managed to get both Saturday and Sunday off. So I went to a Hallowe'en party - my first in years. The last one I went to was at a friend's uni digs, so we're talking a while back. I went as Zaphod Beeblebrox, a costume which caused even more problems than my choice this year. 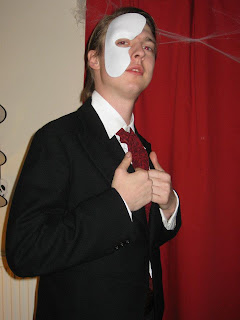 Yep, I went as the Phantom of the Opera (or "Opera Guy," as he was dubbed at the party). This image is from the early part of the evening. You'll notice that while I lack a cape, I do have a mask firmly attached to my face. This didn't last. I'd hoped to find some cosmetics suited to the task, but I left it all a bit late. I asked my occasional ladyfriend Sekai if she had any tit-tape or eyelash glue that might do the trick, but she hadn't any with her when I saw her just before the pre-Hallows weekend. In the end, we settled on double-sided sellotape, which is pretty much what tit-tape is anyway, as I understand it. (I haven't had any call to use it before, being small-bosomed even for a man.)

It worked very well to start with. I bought a reasonably decent but reasonably-priced mask from a costume shop, one with an elastic cord to secure it to the head. This pulled it into a wonky angle, and snapped off in any case, so the mask had to be taped on. I'd trimmed it down - my nose was too big for the nasal section of the mask - and it fit quite snugly. However, eating and talking - something I do a lot of at any party - caused it to wriggle about and become detached. Eventually I gave up on the task of reattaching it, and my costume changed to "well-dressed man with sellotape on face." This wasn't as effective, but at least I was snappily attired. (The photo above fails to show my very swish two-tone opera-shoes, or the fine cut of my topcoat.)

I realised at the party that I should have thought more about this outfit. Several partygoers had used spirit gum in their make-up, and offere me some, only to all discover they'd forgotten to bring their touch up kits. Eventually I added a little fake blood to Hallowe'en up the look, so I became fairly Dracula-eqsue. In the end, I also acquired a very nice cloak from someone we'd dubbed the Scottish Widow (actually, she was Portuguese and unmarried). It was a very fun party, though. It was my flatmate's workmate's (the lovely Ela),   so I knew no one there, which is always fun. Met lots of fascinating new people. The costume turn-out was excellent, everyone put in the effort. There were two Ghostbusters - one commercially source, one home-made, with a very impressive proton pack incorporating working electronics. I hope to stay in touch and form a team next year (we need a black guy to be Winston, although he can of course arrive half way through the night). It was all good fun.

I'd decided on the Phantom last year after seeing the musical in December, as you may have read on this very blog. I'd then forgotten all about it, and had revived old, unused costume plans including van Helsing, the Goblin King and the Hitcher from The Mighty Boosh. I finally returned to the Phantom idea after waking up one morning with the score running through my head, so at least my subconscious was working away. Next year I may use one of the aforementioned characters, although as was pointed out at the party, my uncanny similarity to a young Rik Mayall would instead suggest Lord Flashheart. Or Richard Richard. Or Fred, of Drop Dead Fred. All nicely retro.

Hallowe'en isn't huge in the UK on the whole, not like in the US, but it's becoming more and more popular. Certainly down in Sussex, it's eclipsed by Guy Fawkes Night. Generally, clashing commitments would mean choosing one or the other, but this year I had enough free time to enjoy both! Sadly, I am utterly stuffed full of cold viruses, so have decided to sit this one out. Still, I had a good Hallowe'en, and joined friends and familiars in enjoying some classic spooky-themed movies, including Cushing-Lee-Troughton starring The Gorgon, and our traditional Ghostbusters double-bill. Also Batman Forever, for some reason - on VHS! Ah, the memories of 1996...

Now, I just need to work out what the hell I'm doing for New Year's.
Posted by Daniel Tessier at 11:11

Email ThisBlogThis!Share to TwitterShare to FacebookShare to Pinterest
Labels: costumes, Ghostbusters, Hallowe'en, Phantom of the Opera