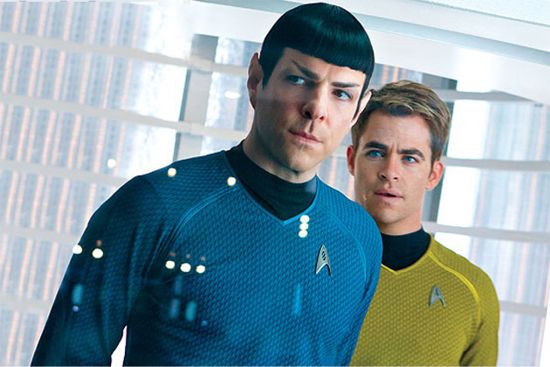 Four years is a fairly long time to wait for a sequel. The 2009 movie Star Trek revived the franchise and brought it bang up to date, but the wait has been long enough to risk squandering a lot of the goodwill it generated. Star Trek Into Darkness had a hell of a lot to live up to, generating an enormous amount of hype as the publicity machine justified the lengthy development time. Perhaps Into Darkness could never live up to its promise. Certainly, while it is an exhilarating, technically brilliant film, it fails to live up to the promise of its predecessor or its own hype.

All of which is damning with faint praise. But I’m a Trekkie, I’ve invested a lot of excitement in this. (I understand that it was really, really difficult sitting next to me while I fidgeted and complained through the twenty minutes of adverts and trailers before the film started. I have waited four years, you’d think another few minutes would be easy, but no.) I think, inevitably, that being such a fan of Star Trek, I am going to be very hard to please. Yet, for all its flaws, I adored the 2009 reboot. It did everything that it had to do to bridge the old and new phases of the franchise and revive it for a new generation. It was a damned fine blockbuster movie. So I’m trying really hard to not be like the hardcore geeks who dismissed that film because the Enterprise nacelles were the wrong colour, or for equally spurious reasons. 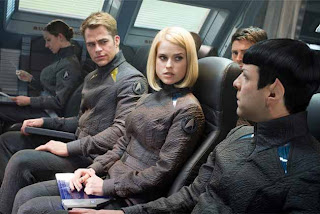 The thing is, Into Darkness is clearly aimed very much at the fans, in spite of also being designed as a standalone blockbuster, palatable to ‘normal’ people. It’s a tough balancing act, and it doesn’t quite land on the right side of the homage/pastiche divide this time. But that’s as a fan. There will be people coming to this film whose only exposure to Trek is the previous movie, or who have no experience of it at all. Into Darkness copies some beats directly from its ancestors in the eighties, and new eyes won’t spot that. For me, though, there were some moments that strayed too close to ripping off the greats.

Still, I’m being too harsh here.  Into Darkness is a thrilling action movie, better than most by far, combining a breathless pace filled with constant incident with a great deal of heart and humour. This, in itself, is hard to do, making sure that a film that hangs on its, admittedly spectacular, setpieces doesn’t feel hollow. As with the previous film, Into Darkness is all about its characters, primarily the relationship between Kirk and Spock, but also their relationships with the other core cast. It follows on from its predecessor faultlessly, even answering one its niggling faults, that of Kirk being promoted to captain on such desperate and impulsive actions. In spite of the gap between film releases, the period between the events is only a matter of months, with the crew of the Enterprise still learning how to function as a team and in themselves. Kirk, in particular, is having to justify his newfound lofty position, and is having a tough time doing so.

The film begins with what should have been a routine mission, but has developed, under Kirk’s aegis, into a chaotic situation that has endangered the lives of the crew and broken the Prime Directive. That old bugbear was quite correctly left out of the previous film, but is here wheeled out as an example of Kirk’s inability to follow the rules of Starfleet. Rather than get bogged down in the sort of cod-philosophical debate that often plagued the TNG-era shows, the Prime Directive is used to contrast the conflicting attitudes of Spock and Kirk (we’re also given a simple, believable reason for why following the directive is important.) The bromance between captain and first officer is still developing, but not without some hiccups on the way.

Added to this is the substitute father figure of Rear Admiral Pike, who once again provides both a motivating and disciplinary influence on Kirk. Then there’s the difficult romantic relationship between Spock and Uhura, more believable here than in the first film in spite of having less screentime than I expected. Yet all the main characters have their moments to shine, and I feel none of the core cast would have anything to complain about regarding their time on camera. Of particular note are the performances by Bruce Greenwood as Pike, who I really could watch command his own series; Karl Urban, who livens up any scene he appears in as McCoy; and Simon Pegg as Scotty, who, while following a rather different path than others in the crew, is vital to events and gets all the best laughs.

There’s a great deal to enjoy in the setup, with more of Starfleet’s operations explored and an excursion to 23rd century London. (While I am pleased by the British presence in this movie, and it’s great to see somewhere other than America in this trip to the future, what about other parts of the world? What’s happening in 23rd century Riyadh?) Events lead the crew to an encounter with the Klingons, (cut from the first film), rocking a new look that is consistent with their forebears but more aggressively in your face. Although nipping from planet to planet seems ridiculously quick and easy in this version of the future, there’s also the sense that the universe is a very dangerous place.

Like the first film, Into Darkness is about terrorism. Unlike the first film, it actually takes a little time to dwell on the ethics of the war on terror, in only quite briefly. Star Trek was at its best when dealing with contemporary issues through a sci-fi settings, and it’s an approach that should be embraced today. After the attack on London, Kirk proceeds on a manhunt, pursuing the perpetrator across space with a payload of devastating weaponry. There’s something of a commentary on the USA’s use of strike forces and tactical drones against wanted individuals on foreign soil, and the inevitable international repurcussions of such actions. It’s a little lost in all the fireworks, but it’s there. 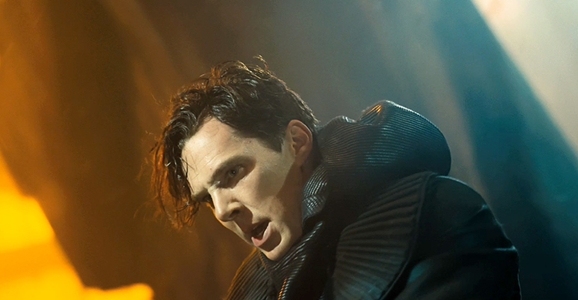 Many a movie hangs on its villain, of course, and Into Darkness is no different. There has been an exhaustive amount of speculation on the true nature of John Harrison, Benedict Cumberbatch’s super-terrorist, and inevitably, the reveal is a let-down. Not because it’s poorly done, or because the truth is ineffective, but there was never going to be a satisfying result to a four-year-long puzzle with a handful of clues. If he turned out to be Khan, it would have been a disappointment because that’s exactly what we were all expecting; however, if he turned out be someone else, no matter no impressive, it would have been a poor substitute for Khan. It’s lose-lose.

Thankfully, Cumberbatch is excellent in the role. The trailers made it look like there was just going to be a lot of intense glares and a scary voice, and though that’s all part of it, his performance is far better than that. Harrison is snidely arrogant, powerful confident and seething with barely repressed anger, tempered only by his intelligence. Cumberbatch’s performance isn’t subtle, but it is powerful, even if he is yet another British baddie in an American film. He’s certainly far more convincing and effective a villain than Eric Bana’s Nero in the previous movie.

The other two guest stars impress too. Alice Eve is a strong, intelligent, sexy Carol Marcus, who holds her own against the dominant males, although the expected romance with Kirk is barely touched upon, surely to be followed up in the next instalment. As her father, senior Admiral Alexander Marcus, Peter Weller provides a strong secondary focus for the machinations in Starfleet. He’s a hawkish, intense force of nature, with a single-minded sense of purpose.

As events unfold, and the protagonists make and break alliances, a continual wham-bam barrage of action stops the viewer from focussing on the howling plotholes. Some moments are clearly included purely for their visual impact – even Scotty remarks that hiding a starship underwater is ridiculous – while some feel little more than rejigged favourites from the preceding film. On the other hand, there is a devastating starship battle and a truly brutal fight involving none other than Spock. There are some gratuitous sexy moments too, but hey, Gene Roddenberry was keen on that kind of thing, and if he could have had Alice Eve in her pants, he would have. Michael Giachino once again provides a stirring score, and thankfully, the constraints of 3D have demanded that the bloody lens flare be reduced. There’s no arguing against the fact that Star Trek now looks and sounds better than ever.

By the end of the movie, both Kirk and Spock have developed as officers and men, their bond stronger and their understanding of one another greater. So much hangs on the performances of Chris Pine and Zachary Quinto, but not once do either disappoint. With these two in command, the Enterprise can continue to fly for many more excursions. Yet, so much in those final scenes, emotionally charged as they are, feels stale, a bad cover version. It’s here that the film steps over that line, and homage becomes pastiche, veering dangerously close to parody. (And you need to be careful, Star Trek is very easy to parody.)

Engaging on a new, five-year mission of exploration, the Enterprise needs to find something new out in the Galaxy. Star Trek needs to boldly go forward. 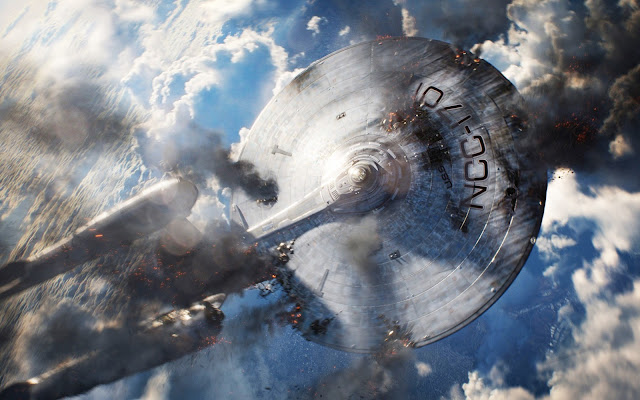