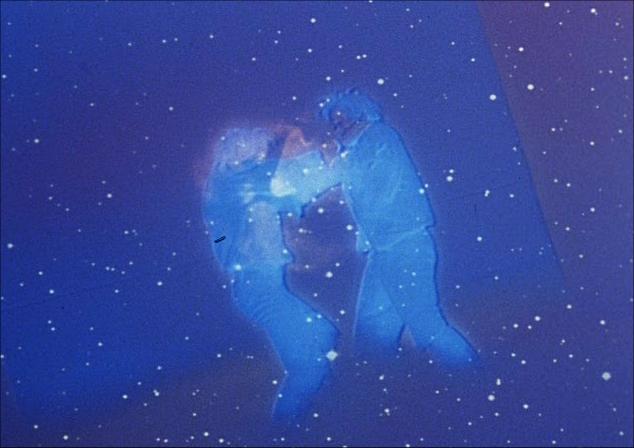 TOS 1.20: The Alternative Factor
or

Captain Kirk vs the Looney

The Mission: Investigate a devastating spatial effect originating on an uncharted planet.

Planets visited: An uncharted iron-silica planet with an oxygen-hydrogen atmosphere. It may have once been home to a civilisation, many centuries ago, according to an unreliable testimony. It’s also filmed, once again, at Vasquez Rocks.

Captain James T: He’s in a shitty mood throughout this episode. He automatically assumes the weird effect emanating from the planet is the prelude to an invasion. Kirk gets to be the first human to visit a parallel universe.
“I want facts, not poetry!” he demands of Spock, but later gets pretty poetical on the bridge himself.

Green-Blooded Hobgoblin: Confidently calls Lazarus a liar, and is surprised when he is offended. Doesn’t like not having an explanation for the effects on the planet.

The Real McCoy: By now, “I’m just a country doctor,” has become a catch-all excuse for anything he doesn’t know.

Phenomena: A parallel universe exists, a “minus universe” composed of antimatter, and has come into contact with our own, creating a rift in space-time. When the two universes interact, they threaten to annihilate, and cause a “winking out” that causes everything to briefly cease to exist. This apparently stretches throughout “every quadrant of the Galaxy, and far beyond.” If they come into contact fully, the two universes will permanently annihilate. 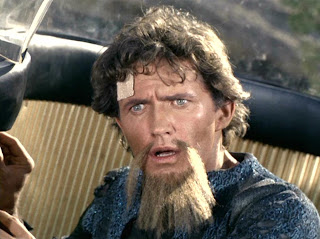 Beardy-Weirdy: Lazarus is a peculiar man who has appeared on the planet and is the source of the conflict between universes. There are, in fact, two of him, one from the matter universe and one from the anti-universe. Unfortunately, the one from our universe is nuts. He and the anti-Lazarus battled, thrown into a “negative magnetic corridor,” a link between the two universes. Anti-Lazarus sacrificed them both, trapping them in the corridor, to prevent their battles from threatening the fabric of reality.
Although he is identified as human, we can probably presume this just means humanoid. He claims to be a time traveller from the distant past, but much of what he says is suspect, in either version of the man.

Future Treknology: Lazarus has a tiny spaceship, a one-man saucer with a bubble cockpit. It’s very cute. He describes it as “a time chamber, a time ship,” and it not only allows him travel through time and space, but seemingly between the universes. Like the Enterprise, it requires dilithium crystals to function. The craft’s position on the planet is the point at which the universes are threatening to come into contact, with the negative effects emanating from that singularity.

Sexy Trek: Lt. Masters, played by the gorgeous Janet MacLachlan, is the main engineering character for this episode, replacing Scott who isn’t present. She was originally going to have a romantic relationship with Lazarus, but this was removed due to the worry that viewers in the southern states wouldn’t accept a mixed race romance. So much for Star Trek breaking new ground against that kind of prejudice.

Verdict: A strange, experimental episode, more like an episode of The Outer Limits than one of Star Trek. It’s better than its poor reputation suggests, with an interesting central dilemma and a mystery at its heart. However, it’s poorly structured, and Lt. Masters role has very clearly been stripped down. There’s altogether too much footage of Lazarus falling off rocks, and his beard appears to have a life of its own. Nonetheless, there’s some interesting imagery. The ending is very odd, with Kirk wistfully asking “But what of Lazarus? What of Lazarus?”

TOS 1.21: Tomorrow is Yesterday
or
Captain Kirk vs the US Airforce

The Mission: Thrown into the 20th century and with local airforce men aboard, the Enterprise must be returned to its own time without disrupting history.

Future History: In the 21st century, Shaun Geoffrey Christopher, son of Captain John Christopher, commanded the first Earth-Saturn probe, a milestone in space exploration.
Kirk implies that he is two centuries in his past, putting the series in the 22nd century, rather than the usually accepted 23rd; however, since he was making a joke at the time, this may not be accurate. He refers again to the United Earth Space Probe Agency (UESPA) as being the agency that commands the Enterprise. He describes it as a “combined service.” This is the last we’ll hear of UESPA in the original series, but it will be retroactively described as the authority that oversees Earth Starfleet in Enterprise.
This episode can be retroactively dated to July 1969. The radio broadcast picked up by the Enterprise states that a manned moonshot with three astronauts will take place on Wednesday. In real life, Apollo 11 launched with Armstrong, Aldrin and Collins on Weds, July 16th, 1969. 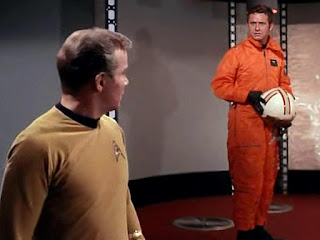 Captain James T: Clearly sympathises with Captain Christopher, acknowledging that were the situation reversed, he’d do everything in his power to report to his superiors. He’s still determined to follow Spock’s recommendation, in spite of worrying about Christopher’s possible difficulty with adapting to life in the future. He joins the covert mission to the airbase with Sulu, almost immediately starting a fistfight and getting himself captured. He really doesn’t quite get the idea of a covert mission, does he?

United Space Ship: The Enterprise is revealed to be one of only twelve such ships in the fleet. The ship has a quartermaster, who supplies Captain Christopher with a uniform: gold for command/ops division, which matches his post as a pilot, and the rank of lieutenant, which is the naval equivalent of his airforce rank of captain.

Sexy Trek: This episode is risible in its attitude towards women. Both Kirk and Christopher gawp at a female crewmember as she walks through a corridor to some sexy backing music; it’s understandable that Christopher is surprised to see women serving on the ship, but Kirk’s look suggests he only allows them on board so he can look at their asses (Kirk and Roddenberry had a lot in common, it seems). The ship’s computer has been overhauled by a taskforce on Cygnet 14, a planet ruled by women, and so they’ve given it a female personality, which of course means it’s sultry, sulky and “has a tendency to giggle.” Ugh, how patronising can this show get? 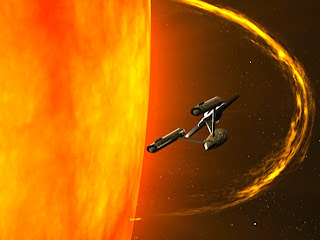 Time Travel: The Enterprise is thrown back in time by its escape from the gravitational pull of a “black star” (an early exploration of the concept that later in 1967 would be refined as a black hole). This is the first complete instance of the “slingshot effect” that will be used to transport the crew through time on two further occasions (the second season episode Assignment: Earth and the movie Star Trek IV).
The mechanics of time travel make frankly no sense in this episode, with some very questionable ideas regarding causality. On its trip back to their own time, the Enterprise moves further back in time while picking up speed, allowing Christopher and the airbase guard to be beamed back into their own points of origin. For some reason this means they forget everything that has happened to them during the course of the episode. Also, the clocks run backwards while the ship moves back in time, for no reason.

Verdict: A good, old fashioned time travel yarn, of the sort Star Trek will come to do a lot of in the future. There’s nothing too groundbreaking here, even for the time, but it’s decent fun and there’s a frisson to be had seeing the Enterprise and its crew interacting with a recognisable world. Naturally, it’s a little old fashioned now, but that doesn’t detract from it too much. Roger Perry is great as Captain Christopher, a very sympathetic character who we root for throughout the episode. The remastered version is particularly pretty, with plenty of new effects sequences which really support the episode well.
Posted by Daniel Tessier at 14:49