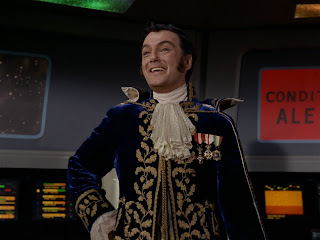 or
Captain Kirk vs The Naughty God

The Mission: Make it through the star desert in order to reach Colony Beta 6.

Planets visited: Gothos: an iron-silica planet (much like the Earth in that respect), located in the star desert of Quadrant 904, about 900 light years from Earth. It seems to be a rogue planet, drifting through space with no primary star. It has a thick, toxic atmosphere and a highly volcanic surface, and is deadly to organic life, with the exception of one tiny area kept habitable by Trelane. The planet actually chases after the Enterprise when it flees. It is revealed the entire planet was constructed by Trelane himself.

Beta 6: An Earthlike planet. It’s only actually seen in the remastered version of the episode.

Captain James T: Isn’t afraid to look a superbeing in the eye and goad him into a fight. Only Kirk would slap a god in the face (Picard would talk to him sternly, Sisko would punch him, Janeway would just annoy him). Despite his jokey manner on the bridge lately, he has no time for Trelane’s games. He risks his life to give the Enterprise a shot at escaping. His speech to get Trelane to challenge him is a perfect example of Shatner’s… unique… acting style.

The Real McCoy: Wastes no time tucking into Trelane’s banquet, but is disappointed that it has no taste. He hasn’t lost his thing for women in old-fashioned dresses, judging by the look he gives Teresa Ross (the latest of the interchangeable yeomen) when Trelane dresses her in a ballgown.

Sexy Trek: On the subject of Teresa Ross, Kirk is sure to get a good eyeful of her cleavage before she goes to change.

Green-Blooded Hobgoblin: Squares up to Trelane and insults his intellect right to his face. This gives Trelane cause to like him more, saying that his ill-manners are his “one saving grace,” and that they must be from his human half.

Future History: Trelane’s castle is done up in what appears to be a late 18th, maybe early 19th century style. The crew realise this due to his observing the Earth from a distance of 900 light years - meaning that he’s seeing the world as it was 900 years ago. This would place the series in at least the 27th century, much later than any other estimate even in the generally vague first season.

Alien Life Forms: Trelane’s species are extremely powerful, energy-based entities - his parents show up appearing as blue-green lights. In spite of his incredible powers, Trelane is merely a child, and treats human beings at pets or playthings. Nonetheless, he finds them interesting, and considers that he is studying them. Thankfully, his parents take a more responsible view of lower life forms.

Trophies on display in Trelane’s drawing room include the head of some crocodile-like monster, mounted on a wall, and the stuffed bodies of an alien bird (possibly the one seen on Talos IV in 1.0, ‘The Cage,’) and the Salt Sucker from M-113 (seen in 1.5, ‘The Man Trap’ - watch for McCoy’s double take when he sees it).

Future Treknology: Trelane’s power doesn’t seem to be innate; instead, he draws it from an energy source, machinery hidden behind a mirror in his mansion. However, he does have enough power to vanish after Kirk destroys the mirror, and shortly returns, claiming to have other power sources at his disposal. Whether his parents are in any way constrained is unknown.

Links: It’s hardly an original observation, but we can’t get away from it - Trelane is very like Q. Some of the novels and comics have suggested links between the superbeings (Peter David’s novel Q-Squared even hints that Q is his real, illegitimate father). This doesn’t seem to fit with the barren Q Continuum we see in TNG and Voyager though.

Trek Stars: William Campbell is perfectly cast as the capricious Trelane. He’ll be back in 2.13, ‘The Trouble With Tribbles,’ as the Klingon Koloth - and again, as the same character, in DS9.

Verdict: Powerful yet childish aliens are already on the verge of becoming a Trek cliché - it’s not that long since superhuman Charlie X menaced the crew. Yet this is a good, fun episode, livened up by the performances of Campbell and Shatner. 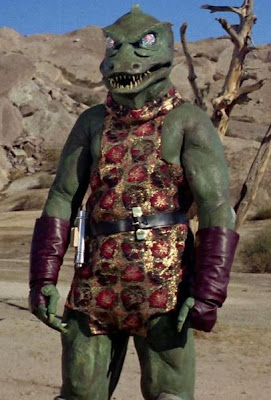 TOS 1.19: Arena
or
Captain Kirk vs the Big Lizard

The Mission: Attend to a summons to Cestus III. Upon discovering the colony has been destroyed, Kirk sets himself a new mission – to pursue and punish the attackers.

Planets visited: Cestus III, the location of an Earth colony. Unknown to the colonists, Cestus III lies in Gorn territory. The set used for the devastated colony is very impressive. Kirk and the Gorn slug it out on an unknown desert planet (Kirk calls it an asteroid), filmed at - hooray! - Vasquez Rocks.

Captain James T: Sounds almost disinterested when reporting that the colony has been destroyed, but on the bridge it’s clear he’s taking the attack quite personally. He comes to the conclusion that the attack, and the luring of the Enterprise, is the prelude to an invasion, and sets on the Gorn ship with its destruction in mind. He clearly remembers his school science lessons, going by his mixing up gunpowder from sulphur, carbon and potassium nitrate. He throws himself into the battle with the Gorn on the barren planet, but later shows compassion for his opponent when he is in a position to kill him, which impresses the Metrons.

Green-Blooded Hobgoblin: Initially has a more enlightened view of alien life than Kirk, suggesting that it would be wrong to kill a sentient being even if it had committed a crime, remarking that killing the aliens will not bring the colonists back. He does, however, back Kirk’s decision.

The Real McCoy: When Spock calls him a “sensualist,” he agrees in a way that makes me think he doesn’t just have food on his mind.

Alien life Forms: The Gorn: Everyone’s favourite giant lizard-man. He’s a seven-foot-tall humanoid reptile, with a broad, T. rex-esque head. He has a wide toothy mouth that he seems incapable of closing, and compound eyes like that of an insect (the remastered version adds CGI eyelids to allow him to blink). He wears a little shiny leoatard and big leather gloves. The Gorn is incredibly strong, but very sluggish. He also seems to have some trouble breathing in the atmosphere of the planet, so perhaps he’s used to a more oxygen-rich environment. He hisses and growls most of the time, except when he’s speaking or chuckling to himself. Gorn are cold-blooded, but certainly not primitive - they’re highly intelligent and have sophisticated technology. They’re also clearly territorial. Despite his questionable fashion sense, the Gorn is a classic Wah Chang alien design, and one of the most recognisable Trek aliens.

The Metrons: Occupy a star system in an unexplored region of space. They first appear on the viewscreen as rings of coloured lights, although this may just be an effect of their communication system. When a Metron appears on the planet, he appears as a feminine young man or boy (it’s a woman in space-man drag again, just like the Talosians). The Metrons are a good example of what we like to call ‘gayliens.’ They’re extremely powerful, with abilities or technology capable of freezing a starship in its tracks, instantly transporting individuals over several light years and flinging ships as far as 500 parsecs (approx. 1600 ly) across space. They’re extremely long-lived - the one Kirk meets claims to be 1500 years old. They’re also massive hypocrites, claiming to be enlightened and civilised but pitting ‘lower’ species against each other in fights in order to judge them.

Future Treknology: The Gorn use powerful disruptors, described as “like phasers but worse.” They also drop bombs which make a cartoony whistling noise as they fall. Their starship helpfully stays out of visual range of the Enterprise, which is handy for a cash-strapped production studio.

Cliché Count: Kirk gets into a scrap, redshirts get vapourised, McCoy berates Spock and godlike aliens turn up. Anything I missed?

Space Bilge: How come the Enterprise scanners don’t pick up that the planet has been scorched of life when preparing to beam Kirk and crew down?

Things to Come: The Gorn are among the most popular of all the Trek aliens, but it took them a long time to return to the screen. Aside from a cameo in the animated series, they didn’t show up again until the final season of Enterprise. A redesigned Gorn is somewhere in the background of the deleted Rura Penthe sequence from the 2009 movie. They became a major playable race in Star Trek Online (on the Klingon side), and the villains for the Star Trek XBox/PS3/PC game that’s just been released. They also made some great comic book appearances, especially in the TNG graphic novel The Gorn Crisis, which is well worth reading if you like the big lizards.

The Alternative Factor: The original ending of the episode, in which the Metron reveals his people planned to destroy the winner of the battle, not the loser, was retained in James Blish’s novelisation.

The storyline is credited to Fredric Brown, who wrote a short story under the same title which contains a similar set-up. The two stories aren't that alike, though, and Gene Coon wrote the script as an original - he only credited Brown once he became aware his story existed and might have been a source of legal dispute. If anything, Brown's story is more like an episode of The Outer Limits, "Fun and Games," sometimes also suggested as an inspiration for this episode.

Verdict: Not the most intellectual of episodes, consisting as it does mostly of rolling around on dusty planets and getting into fights with monsters. The Gorn is the only reason this episode is so well remembered, but the creature is such a triumph it’s impossible to criticise such a thing. ‘Arena’ remains great fun.