Invariably, I read more books than I have time to review; or, to put it another way, if I reviewed them all, I wouldn't have time to read them. Still, here are some of the various recent publications that have given me particular pleasure. It's a mix of fiction and non-fiction, including a good dose of Who-y nonsense.


The absolute stand-out of ObverseBooks' releases this year has to be Storyteller. An anthology of tales from a variety of talented authors, Storyteller is published in memorial of Matt Kimpton, who died last year, aged only 35. Kimpton was a talented writer in numerous fields, and the Chief Skald of Sussex, a position of supreme acclaim as an oral storyteller and poet. What I've Kimpton's work has impressed me greatly, and it's clear that he would have had a great career ahead of him had he not been taken so early.


Storyteller collects thirteen stories of varied style and genre, with evocative titles such as 'Grandad with Snails' and 'Black Mischief.' The first half of the collection is preoccupied with death, but not in a morbid or grim way. Rather, these stories explore and celebrate the changeability of life that is brought by death, and the myriad ways it affects those left behind or awaiting it. The remaining tales explore a variety of themes, with each story distinctly different from the last. It's taken me a little while to get through it. It's a banquet of fiction, each dish rich enough to sate the reader for sometime, rather than tempting them to pig out in one sitting.


Particular favourites include a new Newbury and Hobbes story by George Mann, and another outing for the Manleigh Halt Irregulars by Stuart Douglas, both of which take the protagonists into thought-provoking philosophical realms. 'The Unicorn Leacock' is unforgettable, the raucous memoirs of a monoceros that weaves throughout literary history to wryly funny effect. Sarah Hadley's 'Put Out More Flags' is a pure sci-fi tale with real heart, while Richard Wright's 'The Devil's Children' is powerful and unsettling. These are the standouts for me; every reader will no doubt find the stories speak to them in different ways. It's evident that this is a very personal effort for each of the contributors, and the impact of the works reflects that. It's available both in print and e-book formats, with all proceeds going to the Cystic Fibrosis Trust. 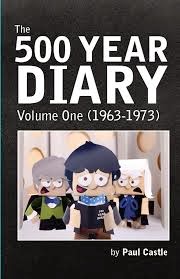 Another Obverse publication, of the non-fic variety, is The 500 Year Diary, an exhaustive trek through the entire history of Doctor Who and its spin-offs. Volume One covers the first ten years of the programme, including not only the television episodes but all the comics, short stories, novellettes, sweet wrappers and Give-a-Show slides. Due to the huge amount of material covered, each entry is kept brief, with a short synopsis and a summary of characters, creatures and settings. While this could be very dry indeed, author Paul Castle has a way with words and a good sense of humour that pervades throughout, particularly in his anecdotal summaries of his favourite stories for each year. It's not really a book to sit down and read cover-to-cover, but it's a fine dipper-into. It's that's a must for the real Who completist, who simply must know the events of each instalment of the TV Century 21 Dalek Chronicles, or which comic to read to find Cybermen on skis. Also, it has possibly the best cover to a Who book ever.


On the other end of the spectrum of programme guides is The TARDIS Eruditorum, Dr. Philip Sandifer's in-depth analysis of the Doctor Who story. Sandifer's blog covers Doctor Who and a variety of other projects, with the Eruditorum volumes later collecting the posts with extensions, corrections and additional essays. It's never anything less than interesting, often fascinating, although his analysis can become rather pretentious at times. Still, he seems to know that, and even his more esoteric posts are lightened with humour. His latest book, volume four, covers the Hinchcliffe years, in which he manages to right a side essay that covers both Space: 1999 and I, Claudius (or, as he correctly spells it, I Clavdivs). It's available in ebook and paperback form from Amazon. 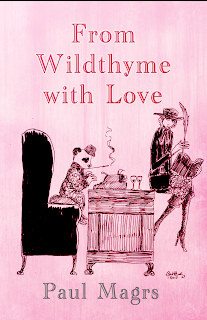 Finally, Paul Magrs strikes again with a gorgeous little book that I think would make a perfect little stocking filler. From Wildthyme with Love is a slim, beautiful little volume with cover art by the brilliant Bret Herholz. It's a celebratory piece for Doctor Who's fiftieth anniversary year, with fifty letters between Iris Wildthyme and her little pal Panda. As we all know, Iris's diaries show who reall had all those adventures on Telos, Skaro and Raxacoricofallapatorius, and each letter parodies a different adventure that the Doctor claimed to have.

It's a slight, daffy bit of fun, often rude and frequently hilarious. As my mum described it, “Silly but nice.” It's available in hardback from Snowbooks or Amazon. There's also an ebook version, but you'll want the hardback, it's lovely.
Posted by Daniel Tessier at 23:56