Who Book-Quest #11: Nothing O'Clock by Neil Gaiman 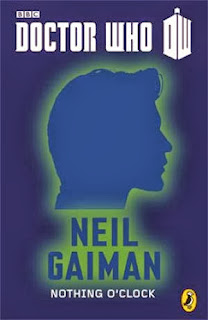 Bringing us right up to date – it references revelations from The Name of the Doctor and everything – is the final instalment in Puffin's series of eleven 'eshorts.' This is new-fangled terminology for downloadable novelettes, although the full collection has now been released in a physical volume under the title Eleven Doctors, Eleven Stories. Bringing together a number of well-regarded children's authors, Puffin has created a series of stories featuring all the Doctors, one of several ventures for the fiftieth anniversary year. They've been a mixed bag, beginning with Eoin Colfer's risible first Doctor story A Big Hand for the Doctor, but there have been some fine entries, including Charlie Higson's simple yet cleverly told ninth Doctor tale The Beast of Babylon.


The eleventh and final story draws special attention due to its author. A Doctor Who book by Neil Gaiman isn't as exciting as it might once have been. We've had two TV episodes from him now, the excellent The Doctor's Wife and the okay-ish Nightmare in Silver, and so the announcement of some Gailman Who prose isn't the huge news it would have been a few years ago. Still, it's a perfect match. Gaiman's strongest work is in the short story format, and his children's fiction has rightfully drawn acclaim. He's a natural fit for this sort of project.


Nothing O'Clock is full of ideas and displays Gaiman's whimsical prose style, but it's a trifle messy in its execution. Perhaps this is due to the length; there's not the room for exploration of its subject that a novel would allow, but neither does this story length allow for the snappiness of a short story. Gaiman runs with his strengths, though, building on the series' mythology while piling on the spookiness. The story features the Doctor and Amy, early on in their travels together, face the Kin, an entity/entities that were once imprisoned by the Time Lords for the great threat they pose to the stability of the universe. The Kin is a fantastic creation, and much of the story's short word count is given over to presenting the horrifying creature.


The Kin's natural form is so utterly horrifying that it keeps itself hidden behind masks. Unlike the sort of super-lifelike disguise used by the Master or Scaroth of the Jagaroth, the Kin use hastily constructed masks and psychically impress their victims into seeing them as they want to be seen. It's an intensely visual idea, yet one that would be impossible to portray convincingly on television. There's an exquisite moment in which Amy is speaking to what she thinks is a little girl, only to realise that it is, in fact, the Kin, hidden behind a pathetically unconvincing drawing of a girl's face. It's creepy as hell, and Gaiman's evocative prose sells it well.

The Kin is a clever concept for a villain worthy of a Time Lord, hopping back and forth through time, both an individual villain and a whole alien race. Gaiman has a good grasp of the eleventh Doctor's foibles, and although Amy is a little sketched in, she's recognisable as her bolshy self. Naturally, this format of story is over quickly, and that leaves little room for plot. Ideally it needs to be tighter than this. However, with a short piece, it's all the more important to make a strong impression, and Gaiman certainly does that. Nothing O'Clock is something of a case of style over substance then – but that style.
Posted by Daniel Tessier at 23:13