Blimey, I'm feeling a bit Doctor Who'd out. Time for some Trek.

The Mission: Investigate a drifting ship in the Romulan Neutral Zone. 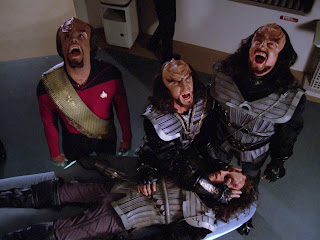 “What is it like for the hunter to lie down with the prey?” Our first proper look at the TNG-era Klingons, and they are as disagreeable as ever. Commander Korris is obsessed with war and battle and baits Worf for serving under humans. He's also a lying scumbag. He considers all hismelf and Worf “brothers, lost among infidels.” Korris and his crewmen are part of a group who are determined to end the alliance with the Federation and go back to war. But he's nice to little kids, so that's alright.

The Klingons, including Worf, scream at the top of their lungs when their injured fellow dies, but don't give a damn for the body. The Imperial Klingon forces continue to use a version of the battlecruiser from the original series. Korris refers to them as the “traitors of Kling!” Obviously this was meant to be the name of the Klingon homeworld, but it's such a stupid name they never used it again.

Starfleet Warrior: We learn a lot about Worf in this episode: that he was orphaned in a Romuland attack, rescued by a human officer and raised on the farming colony of Gault. We learn of his foster brother who joined Starfleet but left. His loyalties are torn between Starfleet, the Klingon Empire and the renegades.

The Picard Maneouvre: “Lieutenant, I am not unmindful of the mixed feelings you must have on this.” Picard, master of understatement.

Geordi Shore: We get our first good look at how Geordi sees the world through his VISOR, as it is patched through to the bridge viewscreen. It's a baffling mix of colours representing different wavelengths that Geordi has learned to interpret. Interestingly, Data and Riker look completely different through Geordi's eyes, with Data surrounded by a sort of aura.

Future History: The crew first suspect the presence of Ferengi, then Romulans, before identifying the the ship drifting in the Neutral Zone as Talarian, before eventually revealing the passengers as Klingons. It's interesting to see the TNG writers slowly build up a political landscape for the 24th century. The Klingon ship boasts the emblems of both the Empire and the Federation, which is unique to my knowledge (the exact relationship between the two states hadn't been set down yet). 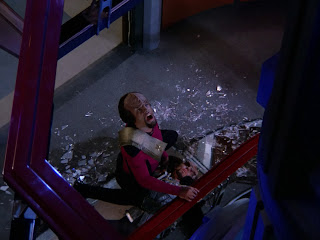 Trivia: Korris is the first Trek role for Vaughn Armstrong, who went on to play more characters in Star Trek than anyone else. He ended up with a semi-regular role on Enterprise, as Admiral Forrest, over ten years later, and also auditioned to play Riker in TNG.

The verdict: Blimey, how did they manage to make a bunch of Klingon terrorists so boring? Full of predictable guff about how Worf's blood must burn with Klingon fire and other such rubbish, this is dreary stuff. Add to that another load of problems with having kids aboard the ship and this new series looks seriously dull, esepcially compared to the usually fun Klingon episodes of the original Trek. Korris gets a sweet death scene though, crashing through the glass walkways around the warp core when Worf zaps him.

The Mission: Investigate the disappearnace of the USS Drake in the Lorenze Cluster.

Planets visited: Minos (pronounced Meenose), an M-class planet in the Lorenze Cluster. The region we see is heavily jungled.


Future History: The Erselrope Wars were fought at some point before the 24th century. We're not given any clue to who the combatants were. The Minosians provided weapons to both sides, but have since been wiped out by their own weapons. The Minosians were the top arms sellers in the galaxy, before they created the Echo Pap 607, a flying killer robot that learned from its mistakes and apparently couldn't be turned off.

Arvada III was the site of a failed colony that underwent some unspecified disaster. Crusher was there with her grandmother.

The Picard Maneouvre: Makes the nutty decision to leave the Enterprise and go down looking for the away team himself. Still, this leads to some very nice scenes where he tends to an injured Dr. Crusher. They're still pushing the will-they-won't-they angle at this stage, and there's a lot that Picard doesn't know about her, like the pretty major fact that she was part of a tragic failed colony. 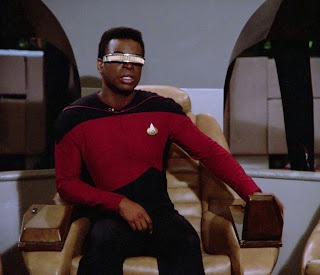 Number One: Turned down the offer of the command of the Drake in favour of a tour on the Enterprise. Instead it went to Paul Rice, for whom Riker clearly has a thing. On Minos, the weapon system projects an image of Rice to get intelligence out of Riker, but he sees right through it and bullshits about a ship called the USS Lollipop. “It's a good ship,” he says.

Geordi Shore: This is a great episode for Geordi, who finally gets some decent characterisations beyond the wisecracking black guy on the bridge. During the crisis on Minos, Picard leaves Geordi in charge of the Enterprise, and despite the fact that he's bricking it, he saves the ship from attack by an orbital super-weapon version of Echo Papa 607. Still, it's probably about now that he decides he'd rather be in engineering in season two. It's safer.

In Therapy: Geordi is practically shitting himself on the bridge, and Troi makes the obersvation that he is nervous. Amazing. How does she manage such incredible insight?

Lower Decks: With practically every senior officer beaming down to Minos, we see a lot more of the lesser crew. We get three one off crewmen: Solis and Su, two cute young things who become Geordi's right and left hands, and Logan, a cocky wanker who is yet another chief engineer. (How many is that now, four? Seriously, it really s time they just gave Geordi the job.) Logan tries to take command on the basis of seniority, so Geordi gives him the bridge then separates the saucer while he goes off to the battle bridge. They really love separating the saucer in this first season, don't they? 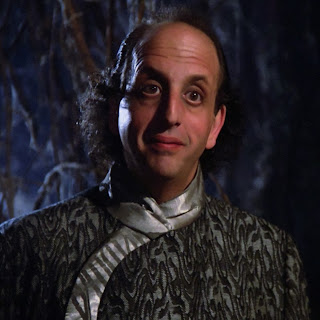 Future Treknology: Echo Papa 607 is a state-of-the-art weapons system. It's basically a flying robot egg with a curvy gun hanging underneath, but it looks pretty cool (even though it is, famously, actually made from a shampoo bottle and a pantyhose packet). It can project holograms of people to gather information from its potential enemies/buyers (the same thing as far as it's concerned). The Minosians also built a big old laser cannon that can melt tritanium (this is supposedly very impressive), and a holographic arms dealer played by weird old Vince Schiavelli.

Space Bilge: Dr. Crusher can identify herbs and roots that can be used on medicine. Fine, except that she's never been to Minos before and can have no idea what the plants there will do. It takes an incredibly long time for Picard to work out what killed off the Minosians and that he can stop the attacks by just buying the ruddy weapon.

The verdict: A decent episode that finally makes something of Geordi. The crew needed to be put in a situation where just beaming out wasn't an option and they actually had to use their wits and resources. The scenes between Picard and Crusher work really well. It's just a shame the crew have to be so stupid in order to spin the plot out for 45 minutes. Logan looks like he's being set up as a major rival for Geordi, but we never see him again.