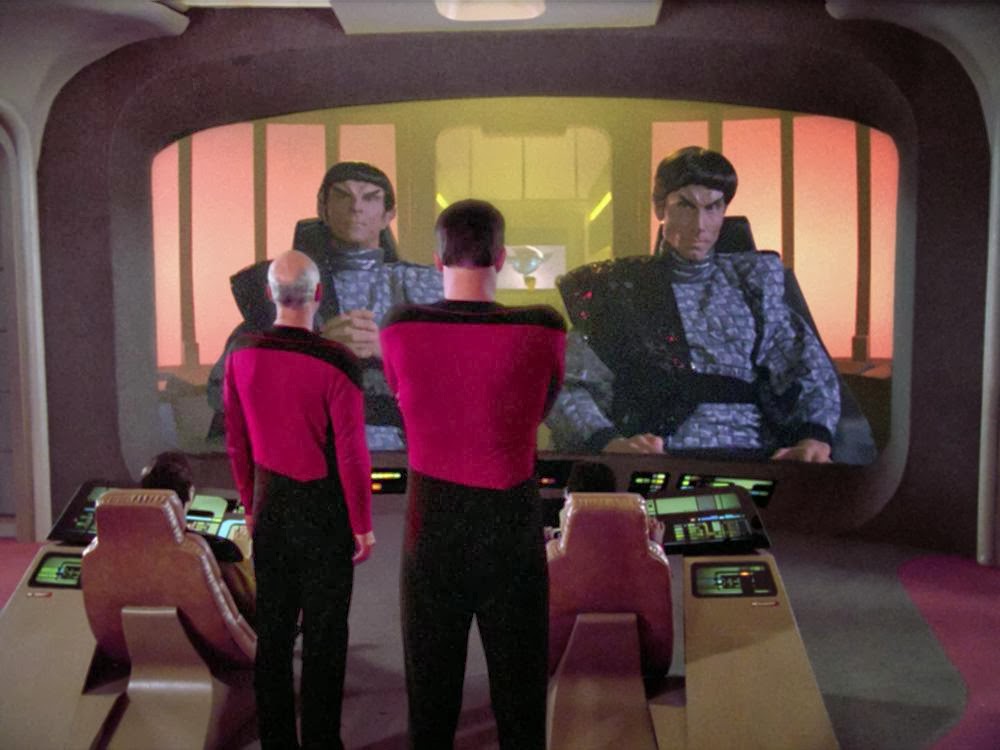 And so, we finally reach the end of The Next Generation, season one.

The Mission: Investigate the destruction of starbases along the Romulan Neutral Zone.

Alien life forms: The Romulans. This is the first appearance of the classic villains in TNG, suitably updated for the era. Like the Klingons, they have had a make-up revamp, giving them an enhanced ridged brow . It's not Klingon standard, but it does make them distinct from their Vulcan cousins. They have a fascination with humans, which has apparently kept the peace (the fact that the humans beat them in the old war probably helped). 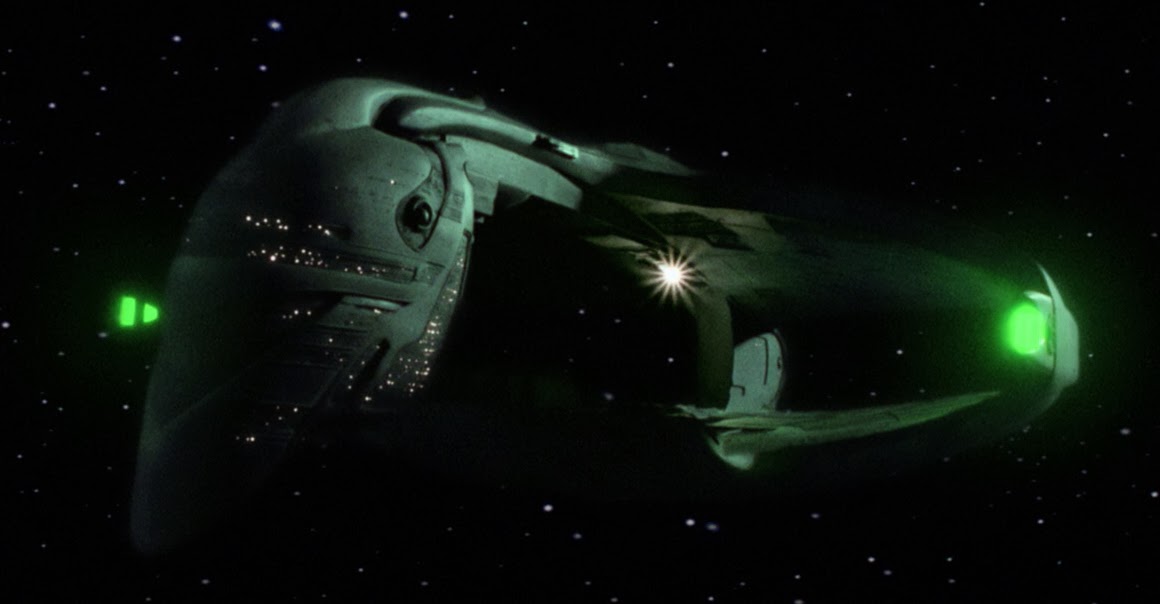 Starships: The mighty Romulan Warbird makes its first appearance. It's absolutely huge, dwarfing the Enterprise, although the shots here don't really make that clear. It's a clear development from the old Bird-of-Prey, sticking with the aquiline design but making it bolder and more threatening. It's equipped with a powerful cloaking device that the Enterprise sensors cannot penetrate.

The SS Birsdeye (name taken from the script, and nice one, btw), is a cryonics satellite that was launched into Earth orbit back in the late 20th century. Somehow, it's made its way across dozens of light years to the edge of the Neutral Zone (this is never explained), and is now barely functioning.

Future History: The year is 2364. This is the first time a definitive date is set down for a Star Trek production, from which all other dates in the franchise are calculated. 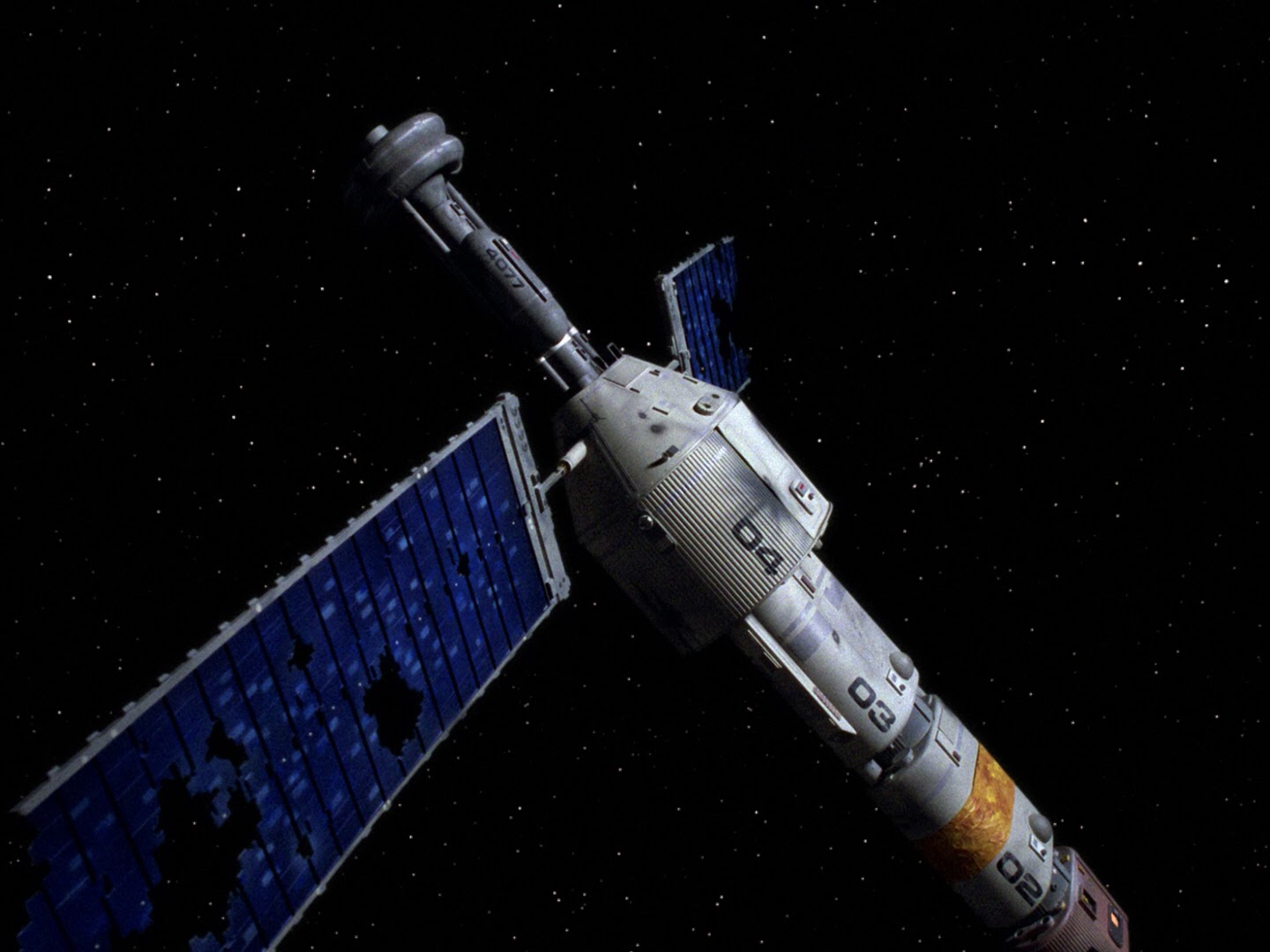 Cryonics was a fad at the end of the twentieth century, when people were terrified of death. Only three people are in any condition to be brought back to life, their illnesses cured by 24th century techniques. They are housewife Clare Raymond, musician L.Q 'Sonny' Clemonds and tycoon Ralf Offenhouse. It's fair to say they have a little trouble adjusting to the 24th century. These days, no one knows what a phone call is, there's no money, and television went out of fashion in the 2040s (surely not? At least Doctor Who should make it to its 75th anniversary.)

The Picard Maneouvre: No one tells Picard that Data beamed the human survivors over. He takes offence when Offenhouse compares the Enterprise to the QE2. He totally rocks when he talks the git down, calmly explaining how his money is worthless and his way of life extinct. He comes back with a good point though – the rich guy survived to live again in the future.

Number One: Has a pretty low opinion of the three resurrectees. Frankly, he's a bit of cocky bitch this episode.

Elementary, My Dear Data: He really doesn't like being called a robot. It's Data's curiosity that creates the whole situation. He requests to beam over to the satellite, and beams the three salvageable patients back without authorisation.

Son of Mogh: Despises the Romulans for destroying his home and killing his family on Khitomer. Not a good episode for him, bless.

Trek Stars: Marc Alaimo makes his first (recognisable, after the Antican) Trek appearance as a wonderfully arrogant Romulan commander. He'll be back several times, most notably as Gul Dukat in DS9.

Links: Clare's list of descendants includes not only the first six Doctors Who, but also Miss Piggy and Kermit T. Frog.

Future Echoes: The Terra 9 station and all its partners have been entirely destroyed, scopped from their planets and carried away. The Romulans have experienced similar losses. We don't find it out here, but it was the Borg what done it.

The Verdict: “We are back!” The Romulans return in a pretty quiet fashion that promises a lot more from the future. After a whole season spent skirting around the issue, TNG finally embraces its status as a continuation of the original series. The B-plot of the revived humans makes for a funny mix, but ti works pretty well. We could have done without the comedy music for the funny bits, but they are, at least, a bit funny. Clemonds is great, they should have kept him as their musical mascot.
Posted by Daniel Tessier at 21:26