2.02) Who Mourns for Adonais?
or
Captain Kirk vs. the Greek Rapist

Planets visited: Pollux IV in the Beta Geminorum system (a rare use of both traditional and Bayer names for a system in the same episode here), is a class-M planet. Like its neighbour Pollux III, it is expected to be inhabited.

Stellar Cartography: Pollux (Beta Geminorum) is one of the two twins of the constellation Gemini. It lies approx. 34 light years away, and is confirmed to host at least one planet.

Alien life forms: Apollo, the last of the people of Pollux IV, a species of typical humanoids, except for their possessing of a special organ in their chests that allows them to channel vast amounts of energy. Apollo can direct this energy psychokinetically, growing to enormous size, zapping Scotty and destroying the phasers, creating storms, and attacking the Enterprise. He grips it in his “hand,” a huge forcefield, and projects his image onto the viewer.

Five thousand years ago, the Polluxans visited Earth, where there great abilities meant they were taken as gods by the natives of Greece. They revelled in this worship, but eventually left as humanity moved on. Apollo is now the only one left, the rest of his poeple having sublime themselves into oblivion.

The dryworm of Antos IV is capable of channelling energy in a similar fashion. 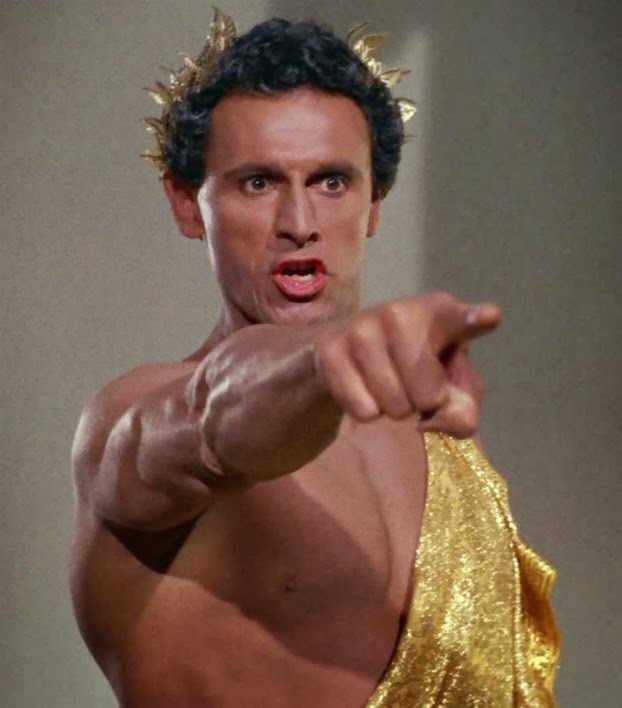 Captain James T: Kirk has no time for Apollo; there's a clear rivalry between the alpha males here. He's willing to risk losing his life or those of some of his team if it gives the Enterprise to escape. To this end, he gets everyone to mock Apollo in order to react and lose his control.

Green-Blooded Hobgoblin: Gets relatively little to do this episode, staying on the bridge since Apollo doesn't want him down on the planet (he reminds him of Pan).

The Real McCoy: Is more concerned with keeping the team alive than getting one over on Apollo, but follows Kirk's plan.

Great Scott: Scotty is the only male character who actually comes off pretty well in this episode, showing genuine attraction and concern for Lt. Carolyn Palomas, leaping to her defence when she is approached by Apollo and comforting her after she is attacked.

Future Treknology: Apollo draws his power from a structure on the planet's surface. The Enterprise is able to penetrate the force field with phasers when Apollo's energy is stretched thin and destroy it from orbit.

Cliche Counter: Chekov spouts some great pro-Russia nonsense, including rebuking Apollo's claim to be a god with “And I'm the Tsar of all the Russias!” and claiming that the Cheshire Cat was actually from Minsk. Scotty also comes out with some good ones, such as “You blood-thirsty Saracen!”

Future History: “Humanity has no need for gods.,” says Kirk. “We find the one quite adequate.” Clearly, this is meant to be a Judeo-Christian future.

Sexy Trek: Lots of bare flesh on display in this toga-fest. Palomas is swept away by Apollo's faintly misogynistic praise, although she is also brave enough to stand up to the god. However, and there's no getting around this, Apollo later rapes Palomas when she spurns him. Of course, we don't see this, but the storm-swept ravishing scene is unquestionably intended to represent that. Palomas returns from her treatment looking seriously distressed. 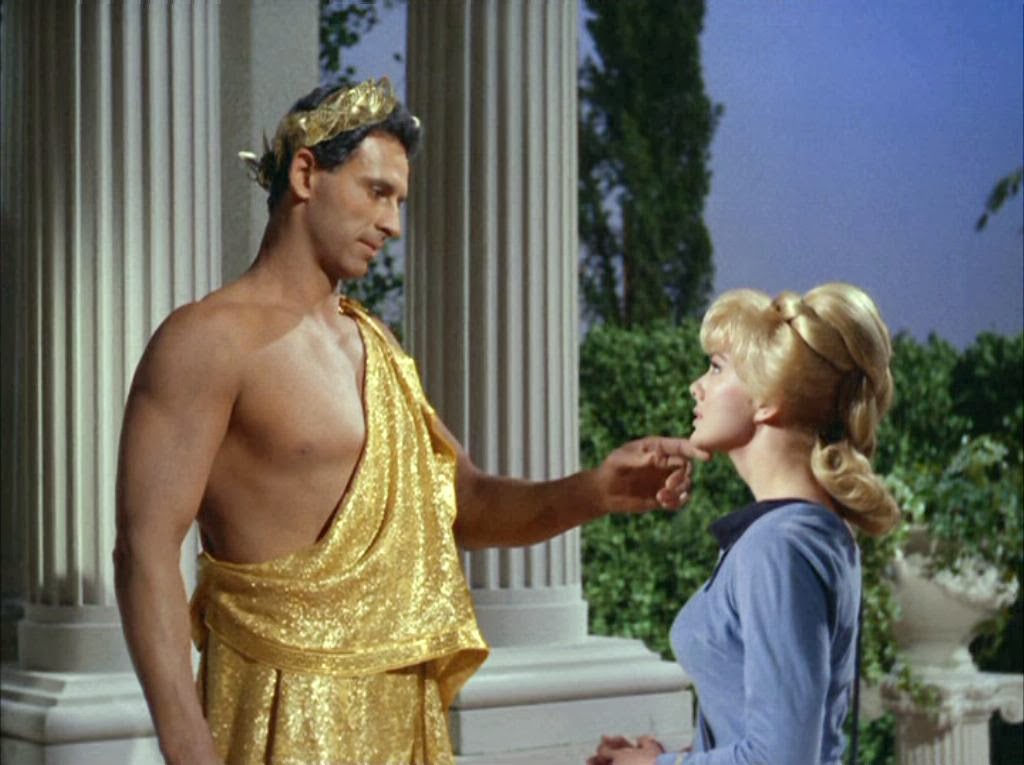 The Alternative Factor: The original ending, preserved in James Blish's novelisation, revealed that Palomas had been made pregnant by Apollo. Peter David's Star Trek: New Frontier novel series includes a character who is the descendent of this child as a major character, and the rest of Apollo's people, “the Beings,” later turn up to claim him. An unofficial sequel to this episode, “Pilgrim of Eternity,” was made in 2013 as part of the Star Trek Continues fan series, featuring Michael Forest back as an aged Apollo.

Title-Tattle: Commonly thought to be just a misspelling of Adonis, the title of the episode is actually taken from the poem Adonais by Percy Shelley.

The Verdict: It's a well-made, well-acted episode, but this is very, very hard to enjoy. There's a nasty, misogynistic streak to this script. While the rape of Palomas is perfectly in keeping with the original Greek myths – the gods were frequent perpetrators of this – it is dealt with in such a dimissive manner by the other male characters that it is impossible to believe that the writers have considered the seriousness of it fully. Palomas is presented as an intelligent, valuable officer but instantly falls in love with her abusive god-boyfriend. At least Uhura gets some minor development, standing in for Scotty in fixing the comms system, and Scotty himself is a gentleman. Both Michael Forest and Leslie Parrish are excellent in their guest roles. Other than that, though, this is tough to like. And at the end of it all, we're seemingly supposed to feel sorry for Apollo.
Posted by Daniel Tessier at 21:05