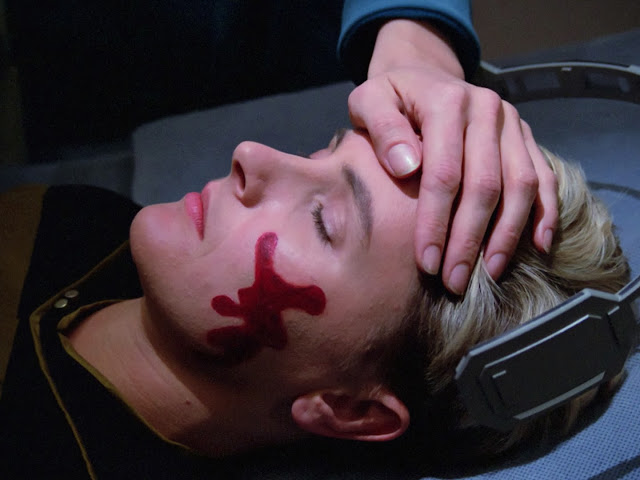 The Mission: Investigate the Delos system during a period of stellar activity.

Planets visited: Ornara and Brekka, inhabited planets of the Delos system. Not actually visited, but you know, they're there.

Space Phenomena: The Delos star is undergoing major magnetic flux, leading to solar flares and other stellar phenomena. Look, I know this sounds boring, but if you're an astronomer, this is exciting stuff. The first five minutes were genuinely the most interesting part of the episode for me.

Alien life forms: The Brekkians and Ornarans are identical looking humanoids, with little dippy bits over their noses. They can generate electrical energy throught their hands for use in attack. The Brekkians were less advanced than the Ornarans, but the situation switched when the Brekkians began selling a drug called felicium to the Ornarans to cure their plague. The plague was cured, but the Ornarans became addicted to it, and the Brekkians have been running a racket on felicium for centuries. Basically, the Ornarans are all ripped to the tits on felicium 24/7 (or however long their days and weeks are). It's never mentioned, but the two races must be of the same species, their ancestors presumably colonising the two planets in the past. 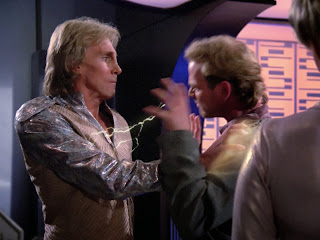 Space Bilge: Picard and co. are baffled how someone as incompetent as the the Ornaran captain T'John can have been running a ship for seven years. It's a good point; seeing as they can't even repair the ship and only care about their next hit, it's surprising they haven't blown themselves up yet.

The Picard Maneouvre: Is bound by the Prime Directive not to interfere with the situation in Delos, so he follows it to the letter, refusing to interfere by repairing the Brekkian ships and thereby cutting off the trade route. He's vehemently opposed to breaching the Directive, just as Dr. Crusher is opposed to letting the Brekkians continue to exploit the Ornarans.

Familiar Faces: T'John is played by Merritt Butrick, who played Kirk's some David Marcus in Star Trek II. Sadly, he died from AIDS only a year later .

Also, the Ornaran ship is a reuse of the Batris, the Talarian freighter from two episodes ago. We'll be seeing a lot of that prop over the next few years.

The Verdict: “What is the matter with these people?” The premise of the episode is sound, but the writers don;t have the guts to let the allegory tell the story. Cue endless preachy discussions about the evils and temptations of drugs. This is sort of insufferable cod moralising that puts people off Trek. Picard goes on about how important the Prime Directive is and why they shouldn't get involved with the aliens, while the rest of us are just thinking “Fuck 'em.”

The Mission: Rescue Counsellor Troi from her crashed shuttelcraft on a deserted planet. 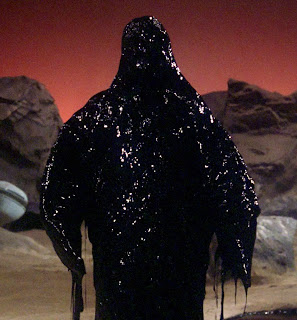 Alien life forms: Armus, the oil slick beast. At first it looks like a bad video effect, before turning into a puddle of tar, then a bloke in an oily binbag. It has no brain, skeleton, muslces or cellular structure. Armus is just a big blob of badness, with an annoying voice. It's impervious to phaser fire, feeding on it. It prevents the away team from rescuing Troi or the ship from beaming her up, and swallows Riker, keeping him alive within its mass while threatening to kill him.

Future History: Aeons ago, the people who lived on Vagra II found a way to remove and condense all their dark impulses, and this residue became Armus. Then the Vagrans abandoned the planet, leaving mad old Armus on its own, stewing in its own nastiness.

The Picard Maneouvre: Picard subjects Armus to one of his stirring speeches, baiting it with knowledge of its impotence and loneliness until it's mad enough to be distracted and the Enterprise can beam Troi back. He's deeply affected by Yar's death.

Elementary, My Dear Data: Doesn't think he quite understands the nature of a funeral, 'feeling' more sorry for himself and his sense of loss than he does for Yar. Picard tells him that he's got it right.

Yar's Last Stand: After twenty-odd episodes of being woefully underused, Denise Crosby quits the show, and thus Yar gets a death scene. This is the first time a main character had been killed in Star Trek and not been revived or resurrected somehow. Finally, there's a sense that the major characters aren't safe, even if it will be a rare occasion that we see them genuinely imperilled again. A lot of fans, and much of the cast, disliked the way in which Yar was killed, in a pointless, off-the-cuff kind of way, but it's really perfect. Yar's holographic funeral speech is saccharine, but her own attitude to her death is perfect. She knew that she'd be bound to die in action one day, doing her job. Whatever her status as a main character and high-ranking officer, Yar knew she was a redshirt from day one. It's far more believable, and affecting, than some grand sacrifice.

Title-Tattle: Working titles for this episode included 'The Shroud.'

The Verdict: Justly remembered as a significant episode for the death of Tasha Yar, this is, sadly, absolutely terrible in almost every other respect. Armus is badly realised and badly performed, and while I can forgive a crap monster (I'm a Doctor Who fan, after all), the whole episode revolves around him. Troi gets some decent material in her moments with the insane creature, but it's all very throwaway, and the monster just works its way through the main cast trying to rile them. Yar's holo-funeral is so gooey it's barely watchable. The real sin is the production team letting a talented, beautiful actress like Denise Crosby slip through their fingers by not giving her material worth her while. Yar had the potential to become an excellent character, but they never capitalised on this.